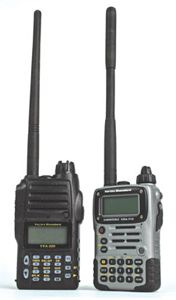 For a couple of hundred bucks, a handheld VHF radio is cheap insurance against a comm failure and its useful for obtaining clearances on the ground or just monitoring ATC. As we reported in our October 2005 mega-review of VHF handhelds, the would-be buyer has plenty of options. In our previous wrap-up, we picked the Sportys SP-200 and ICOM IC-A6 as our top choices. Since then, Vertex

Standard has introduced the VXA-710 Spirit and the VXA-220, touted as improved versions of the previous models. Are these good enough to knock Sportys and ICOM off the VHF pedestal? Unfortunately, we dont think so. If anything, at least one of the models may be a step backward, in our estimation.

The VXA-710 replaces the VXA-700 Spirit we reviewed last year. Amazingly, it is even more disappointing. In our group of six radios, the Spirit was the most expensive and although at $299 discounted, the 710 isnt as pricey as its predecessor, it still costs more than the ICOM models and more than the top-rated Sportys SP-200, which has been reduced in price.

Despite all its faults, the discontinued VXA-700 appeared to be a reasonable 144 MHz ham band FM transceiver. Some pilots are licensed ham radio operators and the old model would appeal to them. One might use the Spirit to fly to a hamfest, or at least that was the idea. But the 710 replaces the Spirits two-meter ham band FM transceiver with a 150 MHz business band receiver, yet the 710 doesnt receive most of the business or public service frequencies. Few if any of the 700s problems chronicled in our previous report-cross modulation issues, mediocre VOR reception, weak performance of an onboard FM receiver-appear to have been addressed in the new model.

In addition, some of the keys on the sample 710 we tried wouldnt operate properly. The tactile feedback acknowledges a light press, but they dont actually operate unless pressed hard. This combined with the opaque multi-level menu interface pushed frustration to new heights.

This voice-only transceiver gets closer to the mark, but still no cigar. Vertex headlines it as “submersible” and with “loud audio” on the box. (We didnt give the 220 a dunk test, however.) Subjectively, its audio can be turned up somewhat louder than other handhelds weve listened to. The 220 comes with a nickel-hydride battery pack, which gives it decent run time. As with other Vertex aviation handhelds, the 220 uses an SMA antenna connector, not the BNC connector normally found in light aircraft, so youll need to address that if you have an external antenna. The 220s single most attractive feature is that its cheap: $179 discounted. Thats $100 cheaper than Sportys SP-200. That makes it worth considering, although the operating logic and performance arent up to Sportys and ICOMs standards, in our view.

ICOM Americas sales manager told us you can leave an A6 or A24 with the cigarette lighter adapter plugged into switched aircraft power and a few hours per week of charging will keep the battery topped without damage from overcharging.

Another option, of course, is improved rechargeable AA cells, providing flexibility at reasonable cost. We experimented with rechargeables in an ICOM alkaline battery pack. A set of Energizer 2500 mAh cells gave respectable transmit times of 105, 69, and 74 minutes in three tests. You could use rechargeables for casual use while keeping a fresh set of alkalines in original packages for emergencies.