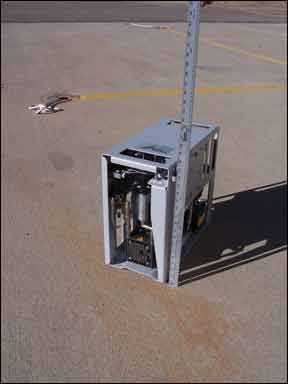 An oxygen concentrator is a way to have a supply of oxygen without having to deal with bottles or worry about whether they can be filled. We definitely like the concept, especially as we’ve “been there, done that” when it comes to getting an oxygen fill.

Durr Technik developed Oxyfly and Oxyfly Light, two oxygen concentrators that will provide oxygen for up to six people at altitudes up to 18,000 feet. The units automatically compensate for altitude. They are designed to be portable, rather than installed equipment—although the Oxyfly weighs 55 pounds and the Oxyfly Light weighs 48.5 pounds—so they do not have to comply with FARs or equipment guidelines, just like your portable GPS.

For our evaluation of the unit, we worked with two experienced A & P maintenance technicians, Terry Shafer, head of the shop at Vector Air on the Erie, Colorado Airport, and Michael Maya Charles.

While we have our disagreements with FARs, we, and the mechanics we consulted, are of the opinion that something to be wired into an airplane’s electrical system draws as much as 25 amps, has a compressor that heats up to 250 degrees F and has to deal with the turbulence and vibration of flight, should use aircraft-quality components and assembly techniques.

After a ground demonstration of the Oxyfly Light and a visual inspection by the mechanics, the mechanics advised us that aviation-quality components and assembly techniques were not used in the construction of the unit. Because of that, we were unwilling to put it into an airplane.

Messrs. Shafer and Maya Charles directed us to the FAA’s Advisory Circular AC43.13-1B, Acceptable Methods, Techniques, and Practices—Aircraft Inspection and Repair, and suggested that if Durr Technik followed those guidelines, the Oxyfly could be turned into a safe, practical and valuable device.

The Unit
We were impressed that Durr Technik was able to create an oxygen concentrator this small and light. It’s able to supply six people—if using Oxymizer-style oxygen-conserving cannula—four if using ordinary cannula. It’s about the same size and only marginally heavier than the home units that supply one person.
The Oxyfly provides oxygen by compressing ambient air and using a mechanical/chemical process that removes the nitrogen. We don’t know the effects of dumping nitrogen into cabin air—we have seen nothing that indicates it is a problem.

The resultant oxygen goes through three filters and a radiator to get rid of the heat of compression, returning it to about room temperature.

We were advised by representative Gabriel Tordai that no regulator is needed, simply a splitter that directs the oxygen from the outflow port to individual cannula. The output is 90-95 percent pure oxygen.

One of the benefits of the oxygen concentrator is that it’s plug and play—there is no need to periodically inspect bottles. So long as the aircraft electrical system is working, oxygen is available. The unit has a TBO of 4000 hours.

As we learn more about the insidious effects of hypoxia, we like the fact that there is no need to delay going on oxygen for fear of running out.

Shortcomings
Section 6 of FAA Advisory Circular AC43.13-1B, Aircraft Electrical Wire Selection begins with the sentence: “Aircraft service imposes severe environmental condition (sic) on electrical wire.” A compact oxygen generator with a heat source that can generate 250 degrees F, living in the vibration and turbulence world of aircraft and drawing up to 25 amps should, in the opinion of the two A & Ps we consulted, use aircraft quality wiring. They reported that their visual examination of the Oxyfly Light showed that not only was aircraft wiring not used, the wires were poorly bundled and subject to chafing against other wires, stainless steel braided cable, components within the unit and the steel case.

Their conclusions were that wire routing and protection was poor. Connectors appeared to be not aviation grade. The oxygen line rubbed against a braided cable. The fan for the oxygen cooling radiator appeared to be for a computer. Having had an avionics cooling fan fill a cockpit with smoke, we feel that fans should never be considered insignificant pieces of equipment.

The hot side of the air compressor was recessed about an inch from the case. There was nothing to keep something loose in the aircraft from coming into contact with it. The compressor was shock mounted, however, the mounting was so soft that the compressor moved around enough that it could impact the casing and radiator in moderate turbulence.

The steel case had sharp edges and no means of easily securing the unit.