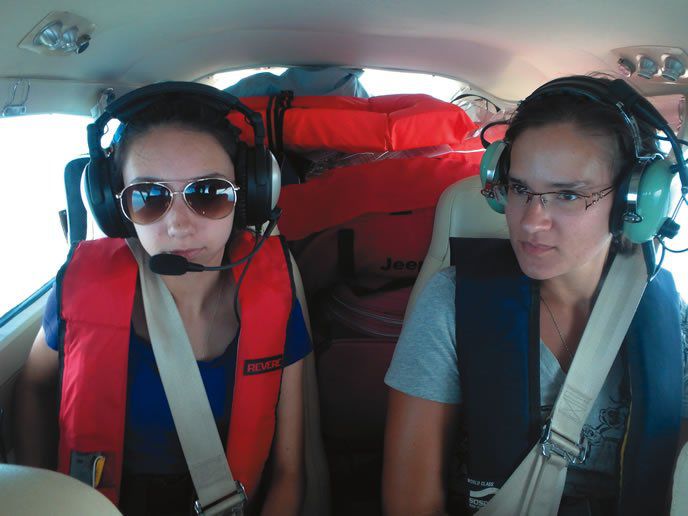 If you fly one of the vast majority of general aviation aircraft, you can legally operate over any of the waters in and around the U.S. without any sort of flotation device aboard. The requirement to carry survival equipment for operations over water more than 50 miles from land set out in FAR 91.509 only applies to airplanes weighing over 12,500 pounds and turbojets. We bugsmasher operators don’t have to carry so much as a set of water wings.

Given that most pilots can’t swim even a mile and despite the fact that aircraft engines can’t tell if they’re operating over land or water (and have proven very reliable so long as they are getting fuel), having some sort of personal flotation device for each person aboard an airplane that’s flying over water is sensible.

We did a survey of what’s available for personal flotation gear that we considered suitable for general aviation use and came away impressed with the size of the selection and not shocked by the prices.

When it comes to terminology, we’ll use personal floatation devices (PFD), life vests and life preservers interchangeably even though such usage may not be precisely accurate and the FAA uses the term life preserver in the regs.

Because most Part 91 operators do not have to carry life preservers, those who do so are not required to carry ones that are FAA approved. For those who do wish to carry aviation life preservers, they are approved under a version of TSO C13f. At a minimum, we think that a PFD intended to be used by an adult as insurance in case of ditching in a Part 91 general aviation airplane should be Coast Guard approved for watercraft and provide a minimum of 35 pounds of buoyancy.

Based on experience in various general aviation aircraft, we think that trying to put on a PFD while in the cabin on short notice is unrealistic. Accordingly, we strongly recommend that if you are going to be flying over water and have life preservers, that they be put on prior to flight. The need to wear a PFD means that the unit has to be comfortable enough to be worn continually on what may be a long flight and robust enough that it can be removed from its packaging, worn and then stored many times without damage.

The airline vest-style life preserver is what you’ve seen demonstrated on airliners forever. One of the reasons is that they work. They provide plenty of buoyancy for an adult and keep a person’s head out of the water. Many include a water immersion-activated strobe light for help with search and rescue.

The downside of the airline vest is that it’s not designed for repeated wearings and may not be comfortable when worn throughout a flight. We have used the type for multiple-hour over-water survey flights and found that wearing a shirt with a collar that could be flipped up worked to protect against the real problem—neck chafing. Carefully folding the life preserver after flight and putting it into a dedicated package such as a one-gallon zipper lock bag helped protect it against damage.

The belt pouch PFD is a flotation device in a pouch, worn around the waist on the attached belt. Simply open the pouch and don the PFD. We like the idea, we but have a certain level of discomfort with its use unless the user has practiced donning it. We’ve seen too many examples of people not being able to accomplish a task when doing it for the first time under stress.

To don the belt-pouch PFD, the aircraft shoulder harness(es) have to be released, the PFD slid over the user’s head and the harness(es) reattached. If the shoulder harness and seatbelt are a single unit, everything has to come off while the PFD is put on. The risk is obvious. Because the data on the greatly increased risk of injury or death when a shoulder harness is not worn is so compelling, we cannot recommend something that requires disabling a vital piece of safety equipment in an emergency, even temporarily. Our survey of the market found belt pouch PFDs in prices from $80 to $140.

Continuous-wear PFDs have been increasing in popularity for the last 20 years. We like them because they are comfortable, which means it’s likely they will be used. A close friend flipped his SeaRey amphib while step taxiing after hitting what was probably a submerged log. His daughter and he each had on a continuous-wear PFD. They swam clear of the inverted, partially submerged cockpit, inflated the PFDs and easily swam to shore. Perhaps that event has colored our perception of continuous-wear PFDs, nevertheless, because they are designed to be comfortable as well as to be used, stored and used again over time, we think they are the best choice for use as life preservers in Part 91 aircraft.

We saw prices for continuous-wear life preservers starting at $105 and climbing to $400 for the best units that were designed for pilots who regularly fly over water and contained pouches and attach points for a PLB, signaling mirror and other survival equipment.

No matter what the landing gear configuration of a general aviation airplane, ditching is a surprisingly low-risk proposition—89 percent of the occupants are able to get out of the airplane following a water landing. In addition, fixed-gear airplanes don’t necessarily flip over as is commonly believed—often the gear simply functions as a hydrofoil.

Nevertheless, during egress the cabin may be more or less full of water or upside down. That means that an inflated life jacket—or a flotation device that doesn’t require inflation—may hamper or preclude getting out. That’s why it’s important not to inflate the jacket until clear of the airplane and not to use a marine-type jacket that doesn’t require inflation or inflates automatically upon contact with water.

Life preservers are commonly described as “automatic” or “manual.” We’re concerned that the adjectives are confusing. Automatic means it inflates on contact with water—great for falling out of a boat, but not so hot for ditching. Manual means that the wearer has to take some action to inflate it—either jerking hard on a tab or row of beads, or blowing into an inflator tube. The fact that a CO2 cylinder does the inflation work doesn’t make a life preserver automatic. It’s the requirement for action by the wearer that determines the appellation.

Aviation life preservers use a row of red beads for the device that the wearer jerks—and we mean jerk, merely pulling is not enough—to activate the CO2 inflator. Marine PFDs still have tabs—which can hang up on protrusions or junk in the cabin when you’re trying to boogie out in a hurry. That can either stop you from escaping or cause the vest to inflate inside the cabin—either one an unsuitable state of affairs. Make your purchase decision accordingly.

Because the PFDs we surveyed use a CO2 cylinder to inflate them, and because components and fabrics wear out, every manufacturer recommends regular inspection and maintenance. On top of that, figure on about a 10-year life expectancy.

We like the aviation continuous-wear life preservers for anyone who regularly flies in circumstances where there’s a healthy risk that a power interruption means going swimming. For the price, and with a little care in storage, airline-style vests are a good deal and provide proven flotation. We’re not crazy about belt pouch units where shoulder harnesses are involved. Do not select an automatically inflating unit. No matter what you chose, we consider 35 pounds of buoyancy as the minimum acceptable.