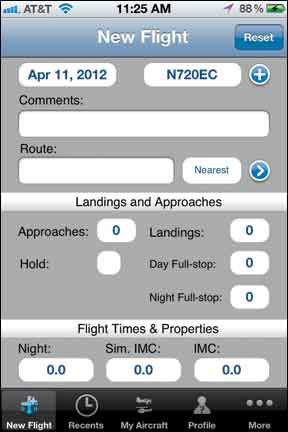 There’s nothing wrong with a paper logbook. It’s simple, cheap and satisfying to use. But digital logbooks automatically back up, total your time for insurance, an 8710 or duty limits, and, if it’s on a mobile device, are always with you.

We were shocked how many options there were for logging via an app, either as a standalone solution or paired with desktop versions. Luckily, a few solutions distinguished themselves from the pack.

iOS? Go LogTen Pro
LogTen Pro exists both as an iOS logbook and a desktop program for the Mac. What we found impressive was that the iOS apps are almost as burly as the desktop version—better in some ways. The two obviously can synchronize, but it’s not necessary, especially with the big-screen interface of an iPad.

The heart of LogTen Pro is the Radar page with your total times. The Radar is astoundingly customizable. Want a special field for currency in tailwheel, full-stop, night landings in that Beech 18? No problem. For the professional pilot, there’s both time remaining for duty limits and predictive warnings for scheduled flights (downloaded from your airline).

Recording flights is sped by favorite aircraft and airports and quick duplication of times to save retyping the same information repeatedly. The flight time list is customizable so you can hide duty times if you don’t log it, but add approach types or water landings if they apply. There are also optional business fields for tax purposes.

What makes the app work as a complete logbook solution, however, is built-in reporting. You can generate tax or time-in-type reports on the iPhone and upload them the company’s website. A link pops into your email to download the report on your real computer for printing or filing. To help organize reports, there are options to group flights in specific trips.

The app has the unique feature that after abuse from your local CFI, a signature can be entered right on the iPad or iPhone. Noah Liberman, President of Coradine (which created LogTen) told us these signatures have passed FAA muster for checkrides. In fact, the FAA requested a white paper from Coradine on digital signatures.

The iPhone version is $30; the iPad version is $60. A universal that runs on both is $80, but that’s really only useful if the two devices both sync with the desktop software. That software requires Mac OS 10.7 (Lion) and is an additional $99. Coradine can take an existing digital logbook file or spreadsheet, convert it and send it directly to the iPad without the need for desktop software. This mean you really can make the iPad your one and only logbook.

App Alternatives
If you don’t have an iOS device, or you want an app that pairs with desktop software for Windows, you have three good options: SafeLog, Logbook Pro and mccPilotLog.

In 2008, we picked Safelog as a top choice for logbook software. We’re sticking with that, with one caveat. Starting on the app side, Safelog works for multiple platforms with essentially the same interface. The app automatically learns your favorite airports and aircraft and offers them your quick entry. Like LogTen Pro, there is one-tap duplication of times, auto-entry of times and options for detailed recording of IFR work. Currency can be seen at a glance.
Safelog requires a desktop or web-based account and downloads your logbook form there. The desktop software is excellent and is essentially duplicated by the web interface, SafeLogWeb, so you can choose which solution works best for you. Safelog had the slowest syncing of any app we tested, however.

They also have an odd pricing structure. SafelogWeb is $46/year for web-only access (no app), although the web interface works pretty well even on a little phone screen. Adding the app for iOS or Android, is another $40. You can also get a bundle of desktop version (but no SafelogWeb access) and app for $140, however the desktop is only a three-year license that must be extended after three years for $40/year. So you end up paying about $85/year for app and web/desktop in the long run.

Logbook Pro is powerful desktop software with a dedicated user base. In our opinion, the $70 program is more complex than most pilots need and has a steep learning curve. The company offers an accompanying app for free download that connects to the desktop via the company’s servers. There are airline schedule imports for a small fee.

The app is easy to use, with quick view of currency and good shortcuts for fast data entry. It’s not quite as clever with favorite aircraft and airports as LogTen Pro or Safelog. It’s also only for recording flights while away from your desktop—you won’t see the rest of your logbook on the app. After syncing, the flights on the app are erased, although your currency, certificates and total times remain available for viewing.

Belgian company mccPilotLog is a newcomer with elegant desktop software for Windows. A free version of mccPilot is available, but app syncing requires the enterprise version for € 69 (≈ $90). Their app for iOS or Android is limited in exactly what it can record—for example, each flight can only have one associated instrument approach. It also doesn’t download all your recorded aircraft and airfield favorites from the desktop, so you must enter them in again on the app. Like Logbook Pro, flights are deleted from the app after syncing, but currency and total times remain.

We found one promising stand-alone app for the iOS also worth a look. The $10 Premier Logbook is a simple, well-designed app that hits the high notes for smart data entry and viewing currency. It’s searchable for time reports and the entire book can be printed to PDF. Its biggest drawbacks are no way to import earlier logbook data (although you can enter a block of previous hours).

AvConnect and Zululog are similar in that they offer monthly or yearly subscriptions for pilot and aircraft owners and have a solid web interface. We think Zululog’s web logbook is easier to use. It also offers some unique features for flight instructors. Both websites offer significant additional tracking for aircraft owners, which might be a deciding factor for some.

The AvConnect and Zululog apps are quite different, however. AvConnect doesn’t download your whole logbook, but does show totals and currency. It can create flights manually, by your phone’s GPS or even by downloading from ATC post-flight.

Zululog’s app shows currency and total times, as well as recent flights, but not an entire logbook. It offers more options for flight details than AvConnect. It also offers flight timers to start and stop, if you can remember to do so, as well as some convenient pilot tools and a place to log squawks.

Syncing to your web account is automatic with either system. The apps are free, and both AvConnect and Zululog offer free accounts, but they are quite limited. Paid accounts for logging pilot time are $5/month and $9/month, respectively. Including aircraft maintenance logging kicks the prices up to $50/month and $25/month, respectively.

Free is good, and that’s what MyFlightbook offers. We think their website demonstrates “You get what you pay for” compared to Zululog, but it does the job. The app has some clever options, such as autodetecting your route and landings from your phone’s GPS. You can also manually start and stop flight timers. It can download up to your last five years of flight time.

There are no other quick-entry shortcuts, and adding items like instrument approaches to MyFlightbook is cumbersome, in our view. We also think the display of currency works backwards: It shows where you are current, but if you’re out of currency, the information vanishes.

Conclusion
If you want a standalone app for your iPad or iPhone, we think LogTen Pro has no rival. If you need web or desktop access and don’t use a Mac, it’s trickier. We think Safelog’s desktop/app or web/app combo best combines ease of use with capability, and MyFlightbook is a winner for getting something useful for nothing spent. We like Zululog and AvConnect, but their bonus value for owners will have to be further explored.