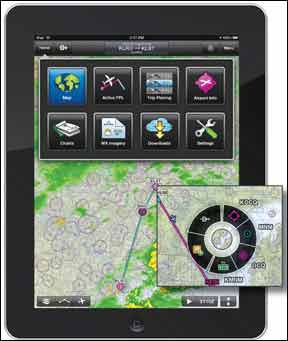 Garmin’s Pilot MyCast app has been an outlier in the Garmin family. Now it’s been revised and rebranded as simply Garmin Pilot. The changes bring some welcome improvements and make navigation similar to other Garmin products.

Go Home
The core change is in navigation, with a home function that calls up big-button navigation similar to the aera or GTN navigators. Functionally, it’s basically the same as Pilot MyCast, but it’s simplified and, we think, more intuitive. There’s also a dedicated direct-to button, just like other new Garmin navigators.

Press and hold on the map view and you will get something Garmin calls the “radial menu.” This is a context-sensitive pop-up offering a ring of three to six large, turbulence-friendly buttons for quick weather, airport or airspace info, flight plan editing or direct-to. Interacting directly with the moving map has been too long missing from Garmin’s app.

Another welcome change is with approach charts. MyCast had improved chart access with chart binders, but the new version allows you to open an approach chart and then toggle via the home menu between that chart and the moving map. Switching from map to approach chart is still two taps, whereas ForeFlight is one and WingX or AviationMaps allow simultaneous viewing on split screens, but it’s a better implementation than previously. Binders are automatically created for your departure and destination airports, and you can now make custom ones from any airport info page.

Garmin overhauled its trip-planning page to improve the ease of use and better organize the output of a DUATs briefing. The active flight plan has changed from a pop-up window to a dedicated page that has been spiffed up for easier and more flexible editing. Garmin Pilot’s download management is also graphically based and works well.

MyCast’s display of weather data on the map was always its strongest suit, and Garmin wisely left this largely the same. XM weather is available with Baron’s Mobile Link and XM receiver (see February 2012 Aviation Consumer), and data age  (internet or XM) is easier to see.

We think Garmin Pilot keeps the strongest features of the old MyCast, while cleaning up many of the weaknesses. It’s now on par with industry leaders ForeFlight and WingX on iOS and AviationMaps for Android. It also now works as the best quick weather app for Android we know.

Is it better than the others? In some areas, such as weather data presentation, we’d say yes. But it was a first-string player there anyway. In other areas, such as flight planning or app navigation, the judgment of “better” rests mostly on personal preference and which exact feature set works best for you. Competing apps offer more functions, but Garmin Pilot covers all the critical ones.

The two-tap nature of the home screen will infuriate some power users for sure as it now makes lateral navigation around the app impossible. We have a few other quibbles, such as not displaying older, published NOTAMs. Many of us only look on our iPad for NOTAMs now (despite the warnings otherwise) and could get caught by a five-month-old closure still in effect.

Garmin Pilot is free for 30 days after download (without Safetaxi and georeferencing, at least). After that, it’s $10/month (or $100/year). Safetaxi diagrams and georeferencing on approach charts are $30 and $50/year, respectively. That pricing is for iOS or Android. Existing iOS users can simply make the switch with an app update. Android users must contact Garmin to get their original fee prorated on the new app.