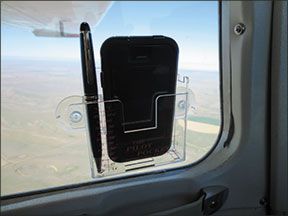 I’m not a cockpit gadget freak. Maybe it was because I spent some time hauling freight and there simply wasn’t time to mess around in the cockpit with stuff. You got in, started up and went. Maybe it was because from the time I started taking dual, I looked at any purchase in how much flying time I was giving up rather than in dollars. Buy a flight bag? Are you nuts? An old briefcase would work fine.

At the same time, I learned that being organized when flying could mean the difference between life and death. A freight dog flying out of my airport died one IMC night when he had an electrical system failure during climbout, couldn’t quickly lay his hands on either of his flashlights and spiraled in.

I’ve used a loop of string around my neck as a place to hang a pen and I’ve wondered where to put my sunglasses after descending into a cloud deck and setting up for an instrument approach.

Accordingly, my initial reaction to International Air Crew’s $22.95 Pilot Pocket PLUS was negative. It seemed to be a contraption that cost money that could better have gone toward actually flying or simply another piece of gear to lug back and forth to the airplane and add to the set-up time once in the pilot’s seat.
However, in the course of some long flights I found the gadget handy and came to like it.

The Box
The Pilot Pocket PLUS is an acrylic box large enough to hold most smartphones and two pens. It has a slot on the end that allows stashing a pair glasses or hanging the lanyard of a small flashlight. A Fahrenheit/Celsius conversion scale is on the face. Three suction cups attach it to a smooth surface—each has a tab for quick removal. The main section has inside dimensions of 3.03 inches wide, 0.75 inches deep and 2.75 inches tall.
The suction cups worked well—and fast. Cockpit setup time matters to me. It easily passed the test—in 10 seconds, my phone and pen were parked where I could get at them quickly and I could go on to other cockpit setup chores. I wondered how the Pocket would hold up in turbulence. No problems—when getting the bejabbers kicked out of me over the Rockies, it stayed attached and didn’t eject the contents.

Empty, it fell off the window when I was parked overnight and the temperature dropped below freezing. Even though it was still cold, it easily reattached to the window and remained in place.

There is an opening in the base, allowing the power cord to be plugged into the cell phone in flight—handy, although it means another cord across the pilot’s lap. I thought the temperature conversion chart was just another meaningless “feature” often applied to gadgets more for marketing than actual use. However, I found that I used it several times as I listened to ATIS and wanted to translate the Celsius temperature into units more meaningful to me.

On one flight, I didn’t put the Pilot Pocket on the window right away. I didn’t get to use it at all—my wife put it on her window and put various items in it throughout the more than three-hour flight.

It’s not a must-have piece of equipment, but it certainly beats searching around on the floor trying to find a pen as ATC calls to amend your clearance. It’s available through Sporty’s (www.sportys.com) or International Air Crew (www.internationalaircrew.com).