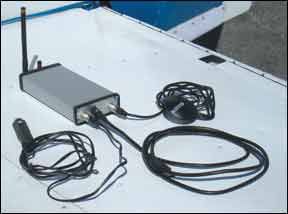 In the formative days of ADS-B, the FAA had a carrot-and-stick plan. Youd have to invest in equipment to comply with the FAAs new traffic system. But youd get free datalink weather in the cockpit as part of the bargain.

Unfortunately, that “bargain” requires a $10,000 Universal Access Transceiver (UAT) to transmit and receive your traffic data (called TIS-B) and receive the free weather (FIS-B). Cheaper solutions meet the ADS-B mandate, but without

weather. Thats all stick and no carrot.

The free weather data is still out there, however, and it was only a matter of time before someone built a receiver to paint that data on a portable display. To be clear: None of these comply with the ADS-B mandate for traffic data. They just provide weather data similar to XMs satellite-delivered weather.

All three systems we reviewed use the SkyRadar receiver built by Ravena LLC (who was kind enough to lend us the unit for this review). Its about the size and shape of a small external hard drive with cables to a small remote GPS and power from the aircraft cigarette lighter. There are also two antennas: a tall one for the FIS-B weather signal and a short one for WiFi. The box isnt peanuts to buy at $1049.95. It also needs a spot in the aircraft where the GPS and ADS-B antennas can see the sky, however, the GPS is on an extendable USB cable, and a six-foot remote antenna for ADS-B can be had for an additional $60.

Thats right, WiFi. The SkyRadar system acts like a wireless network router and uses WiFi in the cockpit to connect to it. You can put your iPhone/iPad into aircraft mode but still turn the WiFi back on to connect, and SkyRadar sells its own app to do just that. The slick part of this is that SkyRadar also sends its GPS signal so the iPhone has a GPS even in airplane mode.

The SkyRadar app is simple, but effective. It offers a basic moving map with color-

coded METAR circles and a NEXRAD overlay. Theres a direct-to function and the option to turn on terrain shading. Dragging a pointer over any airport pops up airport details, such as frequencies and runways, as well as FIS-B data details such as the full textual METARs, TAFs and NOTAMs.

The $25/year subscription price is right, but if youre in for $1050 for the ADS-B receiver, we think there are better options to use it.

A far more robust solution that integrates this same data is Hilton Softwares WingX for the iPad. WingX is a chart viewing and moving map program with extensive preflight weather and other tools. Version 5 just released with several beef-ups, including support for ADS-B weather using the same SkyRadar system. With this functionality, WingX effectively turns the iPad into a portable multi-function display.

Weather data is well integrated into the program as a whole, with the option to layer METAR circles and NEXRAD on any of the moving map views. Tapping an airport or navaid always displayed a pop-up window in WingX with a weather option that showed the last-downloaded internet weather. With ADS-B added, more current data is shown with an ADS-B flag at the start of the text so you know it came from datalink. Theres a convenient Zulu time on the pop-up window to cross reference the age of whatever report youre reading. Scrolling across the bottom gets you to all weather information, datalink if its available or from a previous internet download if not, with the age of the internet weather shown for reference.

We have two significant complaints with WingX 5. One is that the software

released a bit before it was ready, in our opinion. We have seen several crashes with the version on the App Store. It recovers and restarts quickly and the company is prompt at releasing updates, but it happened enough to be mildly annoying.

We think theres also room for improvement in displaying the weather data. ADS-B NEXRAD comes in two flavors, a high-res local image and a low-res image for the lower 48. WingX currently only shows the local image, which means you cant see NEXRAD past 250 miles from the ground station closest to you. This could be an issue with long-range strategic planning, especially in faster aircraft. PIREPs are textual, and when you view them you cant simultaneously pan on the map to see where they are relative to your location. The same is true of AIRMETs. These issues may change upcoming releases. WingX is $99.95 per year, or $199 with georeferenced approach charts. Add another several hundred for an iPad.

ChartFlier from Essential Flight offers much of the same capability as WingX-sectionals, high and low en route charts, approach charts and airport info-but running under Windows 7 on a Tablet PC. Windows 7 isnt as touch-friendly as the iPad OS, so its not quite as easy to use. For example, ChartFlier has four fixed zoom levels for the moving map controlled by onscreen buttons. No pinch-to-zoom here. Windows 7 offers much more capability overall than an iPad, so if youre looking for a full-up portable computer that also works in the cockpit, ChartFlier might fit the bill.

The software is driven by onscreen buttons, which take some getting used to. But

the overall layout is logical and well thought out. Its not as integrated as the iPad solution, with approach plates or airport data opening as separate PDF files. We saw some issues with hangs of Windows, but no problem with the ChartFlier software itself.

Weather data is integrated much like WingX, with METAR circles and NEXRAD on the moving map. NEXRAD age is prominent. Another nice touch is that the forecast winds aloft from the nearest station to your position and altitude are also shown, as well as forecast winds for any station with a forecast thats currently in the map view. Like WingX, ChartFlier offers a popup menu with a tap that includes an option to show METAR, TAF, wind and PIREP details. The next software release will add the rest of the weather products.

We tried ChartFlier on both a 2Go slate tablet, which has no keyboard and is similar in size and weight to an iPad, as well as a Lenovo S10 with a foldaway keyboard. Both want an external power supply, running out of power after about three hours. By comparison, the iPad was down to 70 percent power remaining even though it was using its WiFi. But both work with gloves on, something the iPad cant claim.

ChartFlier is $149 per year (georeferenced charts included), plus the Tablet PC. One year of ChartFlier bundled with a 2Go or an S10 tablet would be $879 or $849, respectively.

While the ADS-B weather is free, its not equivalent to satellite weather. It usually cant be received until youre airborne. Over much of the country, that coverage is guaranteed by 1800 feet AGL, but in many places its 5000 feet AGL or higher. The full suite of products is not as full as the complete XM offering. Lightning data, forecast icing or freezing levels are a few that arent available.

Non-NEXRAD ADS-B weather is also local only. You can find the exact distances and updates in the AIM, but its generally 500 miles from the broadcasting station. Outside that range, youll only get low-res NEXRAD. Also, the way NEXRAD is transmitted, its a time-smeared image with strips of newer returns mixing with older ones. This makes it harder to estimate error based on the images age.

The SkyRadar box will pay for itself less than two years of XM monthly subscription. If youre OK with the limitations, this solution has legs. Platform-wise, we think WingX on the iPad is the best solution currently for ease and capability. Thats unless you absolutely need a “real” computer for travel and want one solution that does it all.

This segment is an ever-moving target as well. More ADS-B systems are in the works and XM connections will be available for the iPad. Well do our best to keep you up to date.