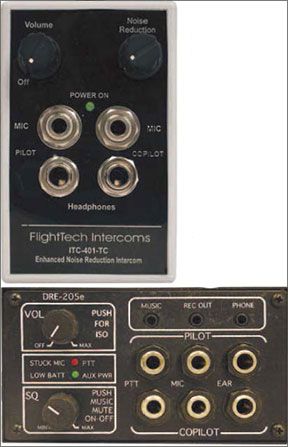 The most unsung aviation invention of the past 40 years isn’t diesel engines or glass panels, but the lowly headset, without which most of us would be deafer than we already are. And if headsets are to do their stuff, they need to be plugged into effective intercom systems (ICS), a product category that improves with each new iteration.

Panel-mount ICS dominates the market, but there’s still a place for small, battery-operated portables in legacy airplanes with no electrical systems or perhaps in modest aircraft whose owners don’t want to invest in panel-mount gear. And who can blame them?

There are plenty of contenders in portable ICS, both in two- and four-place designs. Of late, features in these products rival those found in more expensive panel units and we find that performance of these intercoms is excellent across the board.

Design Brief
Chances are, a portable ICS will be used in a small cockpit so overall size is a critical consideration. So is wiring design. In the non-electrical Cub we tested these intercoms in, there’s virtually zero space to accommodate a portable and the necessary wiring—headsets, radio leads and push-to-talk switch—just begs to tangle around the stick, the rudder pedals and seatbelts. The simpler the intercom’s wiring scheme, the better.

In that vein, two of these products have something we haven’t seen before: Onboard PTT switches that eliminate the need for a remote PTT and the wiring that goes with it. This can be a real plus, in our view.
In some airplanes, battery power will be sufficient, but in others, using ship’s power may be desirable. But again, that’s another wire to deal with and another tradeoff.

One caveat about performance: The manufacturers warn that intercom performance is strongly influenced by headset quality, especially mics. They’re right. We found so much variability in squelch response and distortion levels among headsets that we’re reluctant to say one ICS performs measurably better than another.
As far as market breadth, we’ve selected representative models from major manufacturers, but we didn’t test all the available products. For instance, Pilot Communications USA, which makes the Skycom 200E for Aircraft Spruce, has additional two- and four-place models.

Aircraft Spruce Skycom
As noted, this ICS is made by Pilot and branded by Aircraft Spruce. At $89.95 for the two-place version, it’s by far the least expensive ICS we could find. For $118.95, the Skycom can be fitted with an expansion module for the backseaters.

Performance is on par with the more expensive intercoms, but we noticed that the 200E may be a little less tolerant of variability in headset mics. It holds squelch well enough, but takes some finessing to get it right.
One thing we didn’t like was the 200E’s radio interface. It has a single jack that splits the two mic circuits and requires a remote PTT, leading to a wire routing challenge and the inevitable tangles. All of the other products have dedicated jacks into the radio and two have onboard PTTs.

Pros: Smallest size, by far. For the money, the 200E is the slam-dunk best value and delivers adequate performance for under $100.

Cons: The radio interface is lacking; it could benefit from an on-board PTT.

Avcomm AC-2EX
Along with the DRE 205e, this ICS ranks as heavy duty in this group of five. At $228, it delivers exceptional features, including dedicated PTT jacks for both stations, plus an on-board PTT button, a music input jack and an ICS system audio output for a recorder or camera.

The radio interface is a single cable with two jacks for the radio’s mic and audio. Since no remote PTT is needed, the installation is quick and clean, a real plus if the intercom is used only occasionally and will be removed between flights.

Audio performance and noise rejection appears to be excellent and the size, while larger than the 200E, isn’t too large for a small cockpit.

Pros: Definitely the high-value leader for a full-featured portable ICS. At $228, it has about every capability you could want with crisp audio and good squelch.

Cons: The battery, a single 9 volt, is a tight fit and a bit tough to get into its compartment.

DRE-205E
DRE used to be a player in the budget headset market and had a reputation for good quality at moderate prices. Headsets, Inc. has now taken over that line, including this upscale portable intercom that’s positioned in the same market space as the Avcomm AC-2EX. It’s slightly smaller than the Avcomm unit, but deeper and a bit heavier.

The 205e has separate jacks for the two stations, including a jack for a remote PTT. But it has no onboard PTT, which would be a nice option. On the other hand, it has a stuck mic indicator and a music mute function, plus a low battery indicator. In addition to the music input and recorder output, the 205e has cellphone input. Some owners will want that function for ground phone calls. Unique among these products, the 205e is also shipped with brackets for panel mounting. Its wiring and input jack design make this a practical option.

The 205e has booming audio out-  put and is capable of exceeding the threshold of pain. This may give it some advantage in squelching noise because we noticed that in the Cub’s stupid-loud cockpit, the intercom never seemed to distort noticeably at the higher squelch settings.

At $349, the 205e is the most expensive of this group, but also the most feature packed if you consider the panel mount option. If you want the phone input, for instance, it’s probably worth the additional $120.

Pros: Impressive overall featureset that’s easy to use. The ICS has two 9-volt batteries that slide into easy-to-install drawers, the best such design we’ve seen. Its durable case and controls and the panel-mount option are a nice plus.

Cons: We really miss the onboard PTT. Saving the extra wiring is always a good idea.

FlightTech ITC-401-TC
Next to the Spruce 200E, this was the smallest and lightest of the ICSs we tried. At $169.95, it’s also a good value, given its performance. On our first test flight with it, we noticed its audio seemed crisper on the ground. It did well enough in the air, but in the noisy Cub, we had to crank the squelch up to near the limit to get it to hold, which introduced noticeable distortion, but without rendering the audio unreadable. Caveat: Swapping headsets may have yielded a different result, so we’re not attaching too much weight to this observation.

Different headsets could change it.

The ITC-401-TC uses the same radio interface as all but the 200E, with a pair of jacks for the radio mic and audio. However, these are attached to separate cables, which increases the tangle factor. Tie-wrapping them together would address that.

Pros: Good basic intercom at a fair price. Onboard PTT is a plus. It’s the only intercom with an active-on light.
Cons: Nothing worth mentioning.

PSEngineering Aerocomm III
Well known for its high-performance panel-mount audio systems, PSEngineering has leveraged some of that technology into this portable ICS in the form of what it calls IntelliVox—essentially automatic squelch. Where the other intercoms have both volume and squelch controls, the aerocomm III has only volume.

This works well, to a point. With the Cub’s door open and slipstream and engine noise slamming the headset mics, the aerocomm tended to break squelch periodically, but not continuously.

While this isn’t perfect performance, we didn’t find it off putting. The tradeoff is that the aerocomm’s audio is never distorted, while the other intercoms tend to distort slightly at squelch settings high enough to resist breaking. Moreover, the aerocomm is a better performer in quieter cockpits because you don’t have to fool with squelch.

Sizewise, the aerocomm is the widest of the group, at 3 inches, so it won’t fit in same tight quarters that the others will. It has a pilot-isolate feature, but no onboard PTT. It can be expanded to four stations. At $295, the aerocomm is toward the top of the price tier.

Pros: IntelliVox works well in a moderately noisy cockpit but struggles in high noise. It seems to be the most distortion free of any of the ICSs we tried.

Cons: At a price higher than the AC-2EX, the aerocomm doesn’t have as many features.

Recommendations
Frankly, you won’t go wrong with any of these ICS products, in our estimation. They’re all credible performers. For a minimal intercom, the Spruce Skycom 200E is unbeatable for the price. Its performance is good if not exceptional and its small size means it’ll fit anywhere. Just know that the interface with a portable radio or even a panel mount isn’t the best.

Our top choice for a full-feature portable ICS is the Avcomm AC-2EX, which appears well built and is loaded with features that work well in the minimal cockpit. At $228, it’s an excellent value. If panel mounting is a consideration or you want a phone interface, the DRE 205e is the only choice and is well supported by Headsets, Inc.