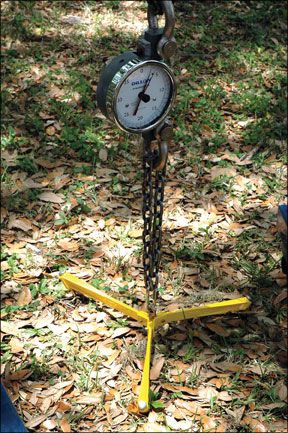 Most paved parking ramps are equipped with tiedown rings, plus adequate rope or chain to do the deed. But some of the most-desirable destinations have nothing of the sort. At back-country airstrips, a friends cow pasture and most fly-ins weve attended, you need to bring your own gear. One option is to assemble a kit from hardware-store items-rope and general-purpose anchors can meet the need. But as with everything else in aviation, if theres a better way, someone will invent and market it…thus commercial tiedown kits.

But are these things worth the money? Are they really any better than the classic cheap doggie auger you can buy at Wal-Mart for under $5? Maybe. Maybe not. While we agree the hardware-store stuff isnt optimal, we were curious about which of three popular commercial tiedown products are best. To find out, we

obtained samples from each manufacturer, plus some gear from our local hardware store, then tried to pull each of these anchors out of the ground. The results surprised even the most cynical among our testing crew and reminded us that what works well in one soil type may not be worth the trouble in another.

We pulled together three commercial tiedowns from Hunting Solutions (“The Claw”), Flyties and Deal Associates Tie Down Kit. We also obtained two types of anchors from a local hardware store- one flat-plate auger-style anchor and one made from heavy spiraled wire. These latter two anchors are commonly used to secure a tent or tarp outdoors, or-when used with a leash-to keep Fido from running amok in the neighborhood, thus the “doggie auger.”

All three commercial products are variations on the same theme: Take three metal stakes and hammer them into the ground at divergent angles to secure the tiedown anchor. The Claw aircraft anchoring system uses a three-armed base, with a tiedown ring in the center. The base and legs are high-quality cast aluminum powder coated bright yellow. Hammer the stakes through the eyelet at the end of each leg and, according to the company, pulling up on the anchor actually helps tighten the stakes. The Claws kit comes complete with rope, a hammer and a carry bag for storage.

Flyties uses a cylindrical hub or base made from black Delrin, with a tiedown ring mounted in the center. At three points around the base, angled holes are drilled. Hammer the stakes into the ground through the holes at the predetermined angle and youre ready to tie down. The angled stakes resist attempts to pull the assembly out of the ground. Also provided is a T-handle tool for removing the stakes-a nice touch-plus rope and a carry bag.

The Tie Down Kit from Deal Associates uses a small, bright-yellow piece of aluminum angle stock, with holes bored to serve as a guide for the three angled stakes. A large center hole drilled through the apex of the angle is the anchor

point. Use two of the angle-stock bases held together by a bungee cord and youve got a great portable wheel chock.

Instead of rope, Deal provides heavy-duty woven straps and carabiners to clip everything together. These are a lighter-duty affair than the automobile tow straps with which were familiar, but heavier than the widely available ratcheting motorcycle and ATV tiedowns. We didnt pull-test them, but we liked them better than the rope supplied with the other kits, or even the rope in our personal tiedown kit. A drawstring stowage bag rounded out Deals kit.

Our first pull was straight up and, if the anchor survived, we reinstalled it and pulled from an angle of about 20 to 30 degrees off the vertical to see if it made a difference. Each anchor was installed in a fresh, undisturbed location. Since our hangar is in southwest Florida, the soil-while firm-is also sandy. We expected one of the commercial anchors to win this pull test, thinking the doggie augers were out of their league. We were wrong.

The vertical-pull winner was the spiral-stake doggie auger, which withstood 575 pounds of pull force before its deformed and stretched remains finally came out of the ground. Since we snapped the head off a second spiral stake trying to install it with a three-foot piece of scrap steel used as a lever, we were unable to perform

an angled pull test. However, the stakes triangular head suffered severe deformation at 350 pounds, which we guess would be about the limit for an angled pull, too. The flat-plate stake did acceptably in the vertical pull, 350 pounds, but not so well in the angled pull, at 225 pounds.

The winner in the angled pull was The Claw, at 450 pounds. The Flyties anchor did very well here, too at 350 pounds, but was the worst of the bunch in the vertical pull, withstanding only 190 pounds. We repeated the test and got the same results.

Deal Associates kit posted the second-best results of the commercial products in the vertical pull, 300 pounds, but was the worst in the angled pull at only 175 pounds.

Concluding that Florida soil isnt the fairest way to test these gadgets, we shipped The Claw and our test gear to California, where our colleague Marc Cook tried the same test in shaded, grassy southern California soil. It eventually yielded to 650 pounds of pull, confirming our suspicion: The soil on which you park has as much to do with securing the aircraft as the anchors used.

The table above includes retail pricing, weight and other details, plus complete results from our pull-testing. We shared our testing results with each manufacturer, asking for any specific comments, but none responded.

When we last looked at portable tiedown anchors in 2001, Flyties came out on top.

But that was before The Claw and Deals kit came on the market. These three products all use the same basic stakes-at-an-angle design and-like the hardware-store anchors-their performance depends on the soil. The Claw did better in California than in Florida, and wed expect the other commercial products to behave similarly.

In looking closely at our results, we see all the anchors yielded to 300 to 350 pounds of pull, either vertically or at an angle. We think theyll resist about twice as much load in better soil. Conveniently, The Claw and Flyties are priced identically; the Deal Associates kit retails for $36 more but comes with heavy-duty straps instead of rope and its anchor bases can double as wheel chocks.

In Floridas sandy loam, the spiral- wire doggie auger worked surprisingly well, even if it gave its all to the cause and couldnt be re-used. If you choose this kind of stake, wed strongly advise carrying some extras, since we snapped the head off one just trying to install it. Or, look around for a better class of auger. Weve seen some heavy duty versions that would certainly resist the deformation we saw.

Dont bother with the flat-plate type anchors. They would be fine if anchored in concrete, but because they disturb the soil so much when installed, they just lack serious holding power. In fact, if youre counting on any of these products to keep an airplane secure in a real blow, theyre unlikely to do that, in our view.

If you use Flyties or The Claw, install the anchors so the rope pulls at an angle; thats when they performed best in our testing, with Flyties alarmingly unthreading itself in the vertical pull, which the other commercial products did not do. The Deal Associates kit worked best vertically, as did the auger-style anchor. If straps in lieu of rope and an anchor you can use as a portable wheel chock are important to you, go with Deal Associates. One other advantage of the commercial kits is that in hard, dry ground, its a lot easier to drive those pin-type stakes than it is to bore an auger into the dirt.