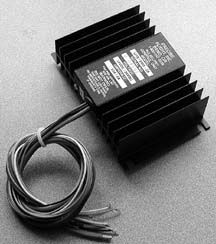 Most pilots generally assume that switching on the landing light during daylight operations radically improves the chances of avoiding a midair collision, especially in a busy pattern.

While this may not always be true, logically, a bright landing light will improve your chances to be seen, especially when youre head-on to any traffic that you might or might not see. If a bright light is good, is a flashing bright light better? Again, probably so, or at least so claims Precise Flight, manufacturer of the Pulselite landing light flasher system.

The Pulselite has been on the market for a number of years and has a reputation for being a well-made, easy-to-install device. Besides improved aircraft conspicuity, Precise Flight also claims that flashing the bulb improves its life. On its face, thats not entirely logical so we decided to investigate.

Small Box
Essentially, the Pulselite is a dedicated, pulsing power supply for a conventional aircraft landing light. The model we tested was the 1210/2405A, a unit that applies pulsed power to the landing lights instead of the normal steady on.

This device will operate on 12 or 24 volts and can be used to pulse any combination of landing or recognition lights in a varying pattern. These pulses may be set at either 45 or 90 pulses per minute and either simultaneous or alternating patterns.

Precise Flight makes other models which will handle much heavier current for large or multiple aircraft landing light systems, including channels for recognition lights.

The actual control unit measures about 2.5 inches by 3.5 inches and consists of the flashing circuitry, a couple of huge power transistors and a massive heat sink which does double duty as a mounting chassis for the components. At $229 retail, we found the Pulselite to be an exceptionally well made and durable product.

The Pulselite can be mounted just about anywhere thats structurally acceptable but it should be placed away from areas in the aircraft where theres a fire or explosion danger from accumulated vapors from fuel or oxygen lines. Otherwise, stick the thing wherever you can find room for it. There are no limitations on wire runs or distance to the bulb.

Installation is relatively simple but does require knowledge of electrical circuits and the ability to test for electromagnetic interference with radios, navigational equipment, autopilots and radar systems.

These tests are explained quite clearly in the documentation provided by Precise Flight. The installation eligibility is covered in the STC provided when you purchase the system. We would estimate typical installation time to be in the three- to five-hour range, variable with aircraft type.

In addition to mounting the pulse control unit itself, youll also have to find a spot for a switch in the panel, since the Pulselite offers the option of selecting pulsing for anti-collision considerations or steady-on operation for night landings and taxiing.

Trying It Out
Weve flown several aircraft equipped with the Pulselite and have observed it at a distance. Theres little doubt that it improves the aircrafts conspicuity during the day. But this varies according to both the angle of view and the number and type of lights on the aircraft.

If youre idling at the runway and looking up the final for traffic, youll readily see any aircraft with its landing light on, due to the straight-on viewing angle. A pulsing light is more conspicuous because it catches and holds your attention. Were not necessarily convinced, however, that its visible at a greater distance.

To really improve your chances of being seen, consider wing-tip recognition lamps-which the Pulselite will also flash in unison with wing- or nose-mounted landing lights.

A combination of flashing landing and recognition lights, along with a strobe and/or rotating beacon, is hard to miss. Recognition lights, while expensive, also offer additional illumination during landing and taxi, which cant hurt. If youre angling for the highest conceivable conspicuity, how about combining the Pulselite with LoPrestis new HID-based Boom Beam? Will it work? Roy LoPresti told us hes had inquiries about this and the company that supplies the HID system is looking into it.

One problem we see is that the HID has an arc strike time thats much longer than the time it takes a conventional tungsten filament to reach full brightness. Its roughly analogous to making a fluorescent or neon tube flash. It can be done but it may not be easy or practical. In any case, LoPresti argues that the HID is bright enough to make flashing it unnecessary and he may be right.

The primary factor in bulb life is the voltage applied to the tungsten coating on the filament and subsequently the rate that the tungsten is boiled off under a given voltage.

We contacted General Electric, the dominant manufacturer of most landing light bulbs, and were told that voltage rules all. For example, 15 volts applied to the popular 4509 bulb we tested would drastically reduce bulb life and the effect of excessive voltage-tungsten deterioration, really- rises exponentially above 15 volts.

If thats true, then is the reverse also true? Does reducing the total time that max voltage is applied to the filament decrease boil off and extend bulb life? GE says the engineering data is undeniable; flashing extends bulb life.

Just for the heck of it, we wanted to see for ourselves. Nominally, GE says the 4509 should last for 25 hours of continuous use, although many owners claim they get far less than that out of one bulb. We think mounting position has as much to do with this as anything. Wing-mounted lamps seem to last longer than those mounted in nose cowlings, probably due to vibration.

For reference, the GE 4509 is one of the more inexpensive lamps, at $11.76 typical retail. But other lamps, such as the 4552, may cost as much as $50 a pop so if youre burning out three or four a year, your landing light costs arent insubstantial.

Would the Pulselite reduce them? We think so. For our informal test, we connected a 12-volt power source to the Pulselite and left it on until the bulb burned out.

With the exception of collision avoidance, the need for landing or taxi lights really begins from 100 to 200 feet AGL. It seems logical to assume that pulsing these lights during approaches and pattern flying not only increases the likelihood of being seen but also reduces the applied voltage over a substantial portion of the bulbs life, thus increasing it.

At $229, the Pulselite is one of the cheaper aircraft gadgets on the market. Even if installing one comes to $400 to $500 total, we think its a good value in that its bound to improve bulb life somewhat if not substantially and it should make your airplane more visible, both in the pattern and enroute.

Also With This Article
Click here to view the Pulselite Checklist.