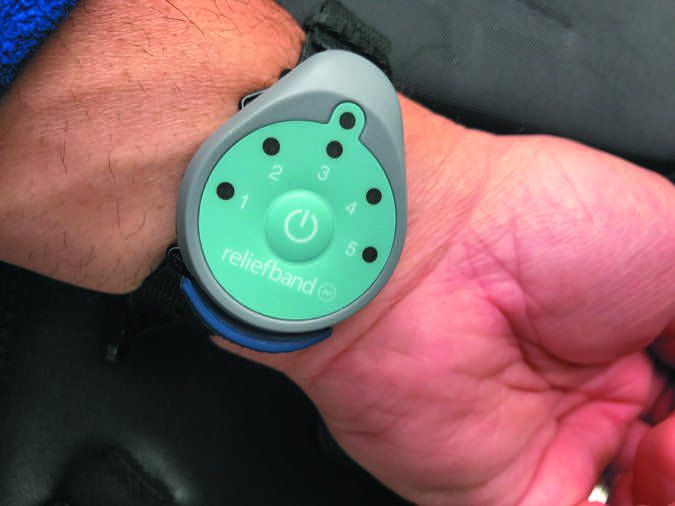 I’ve turned down rides in cool warbirds and open-cockpit aerobats because once I got pretty sick doing aerobatics—and I was the one on the controls. For me, the rotten experience makes the ReliefBand therapeutic watch worth the $95.

Moreover, the price is better than cleaning the aircraft upholstery (you’ll never get it like new) when a passenger loses a $100 hamburger. I recently ordered a new ReliefBand to replace an older model, and learned of a next-gen replacement that’s in the works. Here’s a field report.

I Don’t Feel So Good

Brent Blue, our resourceful go-to M.D., tells me motion sickness is a learned process that can be unlearned. While that useful tidbit won’t help when a passenger does a technicolor yawn at 10,000 feet, motion sickness seems easily treatable with the right approach and remedy. More on the remedy in a second.

There is more to motion sickness than puking and we’ve all felt the symptoms regardless if motion was involved. It might include a headache, cold sweats, increased salivation, burping and flatulence—none of which are well matched for the confines of a small aircraft cabin. The cause? It’s fairly complicated.

Without going deep into medical theory, human balance and spatial orientation (or lack of) are determined in the brain, central nervous system, the eyes and the three liquid-filled tubes of the inner ear. One clinician I talked with simply described motion sickness as sensory overload as the fluids in the ear canals move. But the important aspect is the sensory conflict between actual orientation and what is anticipated. In other words, you’re along for the ride without input or anticipation.

The symptoms can worsen when there’s no outside visual reference. Doc Blue noted that even low levels of carbon monoxide will lower the threshold for motion sickness.

Hardly new to the market, the ReliefBand is a wearable therapeutic neuromodulation device. It electrically stimulates the median nerve in the wrist with an electrode that’s built into the bottom of the watch-like transmitter. The median nerve is at the same location acupuncture needles and therapeutic bands are placed when treating nausea. When the first ReliefBand was released somewhere in the mid-1990s, it required a prescription, and the product changed hands a couple of times before Horsham, Pennsylvania-based ReliefBand Technolgies bought the brand a couple of years ago. The device is hardly limited to aviation activities, although the company said it’s been tested with good success by U.S. Air Force crews.

Jackie Simon, ReliefBand’s chief medical officer, said it’s cleared by the FDA to treat the symptoms of motion sickness, morning sickness and vertigo, plus it’s used for clinical post-op and during chemotherapy treatments. Using it is pretty simple. For those prone to motion sickness from flying, Simon suggests using it up to 30 minutes prior to flight, plus you can wear it for as long as the symptoms last. The only potential side effects from the device (which has a published maximum output of 35 mA) is skin irritation around the area of the device’s electrode.

The ReliefBand is worn on the underside of the wrist. You know it’s transmitting because you’ll feel a slight tingling sensation in the wrist and middle fingers as you’re zapped every four seconds. For best performance, the device comes with a tube of hypoallergenic conductivity gel, which can help when used on dry skin. The splash-resistant (but not submersible) ReliefBand runs on two CR2025 lithium batteries that last roughly 150 hours at medium intensity. A battery life annunciator is located on the face of the device and comes on when there is roughly 10 hours of battery life remaining.

The current ReliefBand differs from older models because it has a five-intensity stimulation feature. The intensity (five being the highest) is adjusted with a button on the center of the face, which also serves as a power button. Flashing annunciators show the current setting. The multiple settings are not for various degrees of sickness. Instead, since the median nerve isn’t in the exact location on every person’s wrist (deep in some, shallow in others), it might require higher amounts of therapy to effectively reach the nerve.

Body mass doesn’t seem to matter. Larger people could have a median nerve closer to the skin’s surface than thinner ones. Again, you’ll know the signal is reaching the nerve when you feel a tingle. I think the variable stimulation feature is a good improvement.

Can everyone count on the ReliefBand all the time? Simon reasoned that no drug is 100 percent effective for the entire population and similarly, the ReliefBand’s therapeutic effectiveness isn’t perfect, either. She said the device has an 80 to 85 percent efficacy rate amongst all populations. During my research I spoke with other pilots, including aerobatic flight instructors, and everyone who’s used the ReliefBand for themselves or for students and passengers reports extremely favorable results. The couple of passengers who used my ReliefBand sample generally don’t get motion sickness. Given the efficacy rate, you really won’t know until you try it.

The ReliefBand, which has a street price of around $95 (Sporty’s selling price), doesn’t exactly have a cutting-edge appearance; it was born in the clinic a long time ago. The next-gen ReliefBand, called the Neurowave, was recently unveiled at the recent Consumer Electronics Show. It works nearly the same as the current model, but has a redesigned non-latex band, a digital feature set, rechargeable batteries and it resembles a fitness tracker. The modern design could be more appealing to nervous passengers and more inconspicuous when worn by crew. The Neurowave—which will be FDA cleared—is expected to sell for just under $200 when it’s released later this year.

Years ago while motoring through the New York Class B in a Mooney, I turned around to find my motion sickness-prone wife slouched down, eyes closed and head resting 90 degrees on the rear sidewall. Just as I was thinking it wasn’t the ideal seating position she authoritatively christened the Mooney’s fabric seats. Yes, I failed to brief her on where the relief bag was. That forever changed my approach to passenger briefings and air sickness preparedness, which should include at least some advice and tips for keeping it together.

First, posture. I asked Dr. Brent Blue if seating position makes a difference in fighting motion sickness and according to him, it certainly does play a role. “Head position definitely can have an effect on air sickness because it has to do with the orientation of the semicircular canals in the inner ear,” he told me. If you can seat a passenger up front, those who suffer from motion sickness might do better because there’s less yaw effect and better visibility, Blue suggested. Supplemental oxygen, plus scopolamine patches applied at least an hour prior to flight, can help too. For some, ginger may help.

To supplement the ReliefBand report, I had Sporty’s send other remedies from its inventory of sickness products, including the $10 QueaseEase product, which I also spotted in a few drugstores. The inexpensive QueaseEase is drug free and contains a blend of natural essential oils including ginger, peppermint, spearmint and lavender. The recipe is stored in a convenient cylinder with a twist cap (see the image below) that releases the scent. According to the company, the molecules from the inhaled oil scent travel to the central nervous system where they break the queasiness cycle. Passengers liked its odor.

As for medicine, there are none that I know of that are legal to use while PIC. For passengers, Zofran is said to be a good anti-nausea/vomiting med if taken prior to exposure.

As for pilots like me who battle nausea during aerobatics, Brent Blue is convinced the ReliefBand can “unlearn” motion sickness. The theory is that unlike millennials who grew up with modern car seats that enable vision out the front and sides of the vehicle, my motion sickness was learned in the bad old days before car seats. Regardless, the key is to have a solid plan in place should you or your passengers fall ill.