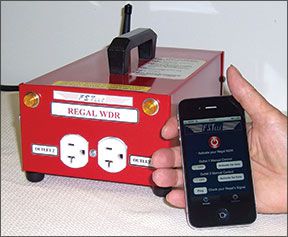 In our March 2013 article on external engine heaters, we noted that there is disagreement among pilots regarding keeping a heater plugged in all the time versus using it only in preparation for a flight. While we do not take sides on the matter, we note that a lot of pilots are concerned about engine corrosion caused by running an engine heater constantly, so they only want to use the heater in preparation for flight.

For those who want some way of controlling their engine heater without it running full blast all the time and don’t want to drive to the airport several hours prior to a planned cold-weather flight, there’s good news. There is not only a healthy market in remote switching units that allow firing up the heater from a distance, there is also a thermostatic control that will run your heater at an intermediate temperature.

Most of the remote switching units will handle two independent lines. All can be controlled via a simple telephone call (landline or mobile) or text message, while two will also respond to dedicated smartphone apps.

Regal WDR
The Regal WDR (Wireless Digital Remote) from FS Tech, LLC controls two 115-volt power lines, with loads of up to 15 amps and 1500 watts, via telephone call, text message or smartphone app. It will switch the lines on or off independently. It is programmed via a smartphone app, text messaging or the owner can put in stored programs when installing the unit.

The Regal comes with a sim card, activated cell phone account and $10 credit on the account. Carl Bumpurs of FS Tech, LLC told us that the user can easily add credit to the cell phone account online. As he’s been in contact with his customers, he’s found that many owners simply put a $100 credit into the cell phone account so they don’t have to worry about it for several years. The only charges that are incurred are when the Regal sends a text, 10 cents per—a rate we found to be consistent with the other switch systems.

Based on how the owner programs it, the Regal will send texts when it switches a line on or off, and it will answer questions as to the status of its programmable features and its operational status, as well as to simple inquires such as how long a line has been on.

We’ve observed problems with cell phone reception in various locations in a single hangar. The Regal monitors signal strength so it can tell you the best place to put it, or you can order the $48.50 optional remote antenna extension, which has 20 feet of lead and a magnetic mount. It’s the largest of the units we looked at, an aluminum box weighing in at 3.2 pounds with two outlets on its face.

It is password protected and acceptable phone numbers can be programmed in. It is the highest priced unit we surveyed at $435.

Switchbox
Priced at $299, the Switchbox also independently switches two 115-volt lines on and off. It will handle loads of up to 15 amps and 1500 watts. It comes with a T-Mobile network sim card activated, with $3 on account.
The Switchbox can be controlled by calling, texting or through a smartphone app. As programmed by the owner, it sends confirmations of commands as well as answers to questions regarding such things as its signal strength and how long it’s been on. The owner provides a security list of acceptable phone numbers. It will not respond to calls from any not on the list. It has a custom timer that allows a line to be switched on for as long as 18 hours, or the owner may choose to switch off the line at prior to the programmed time.

Because the system monitors cell phone signal strength, it also tells you the best spot in the hangar for reception. We like that the price includes a six-foot antenna extension with a magnetic mount. One satisfied user told us the antenna extension proved handy because cell reception varied within his hangar. He also said that the cord from the Switchbox to the wall plug was fairly short, so he tie-wrapped the Switchbox to a spot adjacent to the plug.

Cell Switch CS-100
At $295, the Cell Switch CS-100 is priced competitively, but it is the only unit that will not control two independent power lines. That’s a pretty big weakness given the price of the competition. Further, it is limited to handling 10 amps when the others will take care of either 15 or 30 amps.

The CS-100 is programmed via text messages. The company notes in its advertising that it does not require a computer to program the unit, yet neither do any of the others.

The unit has a security mode through which it will only act on calls from up to 25 telephone numbers that have been programmed into its memory. If the user desires, the security mode can be shut off and the CS-100 will activate in response to all telephone calls.

A call to the CS-100 turns it on for a selected period of time. It can be turned on or off, without time limit, via text message. It requires a mobile phone SIM card (not provided) with sufficient credit to send text messages when programming the unit.

Aerotherm
The Remote-Control Starter (RCS) from Aerotherm will operate two lines with loads of up to 30 amps, the highest of the group we surveyed. At $299, it costs about the same and can be controlled by a phone call or text message—but not by a smartphone app, its one weakness.

For security, 199 telephone numbers can be programed into memory as safe. It can told to allow a line to stay on for up to 18 hours when activated by phone call or text. The unit sends a text when it shuts off. Alternatively, a text can turn a line on and tell it how long to stay on or to stay on until you turn it off.

There is no cost for activating the unit via phone call; it simply recognizes the number and drops the call. There is a per-text charge as with the other units.

The RCS comes with a T-Mobile SIM card and is estimated to cost about $3 for cell service per month. The antenna is attached to the unit itself.

Thermostatic control
McFarlane Aviation takes a different approach to preventing corrosion when using an engine heater. It sells a pad-type heater and thermostat combination to allow the engine to be heated to just above ambient, continuously, reducing the risk of corrosion.

When the pilot arrives to preflight, he or she turns the thermostat to the highest temperature, and the engine is heated to an easy starting temperature in the time it takes to preflight and load the airplane.
McFarlane’s heater is called SAFE-HEET. The pad bonds to the engine sump.

The associated SAFE-HEET temperature controller not only functions as a thermostat, it is used during installation of the heating pad to allow the bonding adhesive to cure at a slower speed.

At a price of $259, we like the SAFE-HEET and temperature controller for those who either can’t get cell reception at the hangar, don’t want to mess with keeping track and paying for a cell phone account, or just want to keep the cost down.

Conclusion
We like the ability to remotely control our engine heater as well as other electrical devices in the hangar—such as a portable cabin heater—which may not need to run as long as the engine heater.

We also like being able to independently control two lines via a smartphone app and receive status reports on what’s going on with each line and the switching unit itself. For $295, the Switchbox Control looks pretty attractive to us with the 30-amp Aerotherm as the one to choose should we have to handle heavier loads, even though it doesn’t yet have a smartphone app.