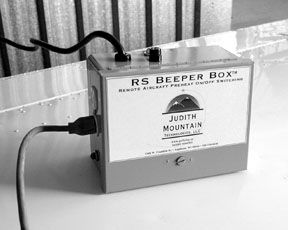 The true challenge of winter flying isnt the cold itself but mustering up the gumption to drive out and hook up the pre-heater a few hours before launching. If only you could do it by remote control.

Everyone has pondered this dilemma and now someone has finally done something about it. The product is called RS Beeper Box and its in the post prototype stage from a start-up company called Judith Mountain Technologies in Appleton, Wisconsin, where they know about cold weather. What it does, basically, is to listen to a conventional pager through an acoustic sensor and then switch on current to a standard outlet, into which you can plug your pre-heater or any other electrical appliance. The Beeper Box is housed in a gray electrical junction box about the size of a shoebox. It can be wall mounted or merely placed on the floor in the hangar. Plug the line cord into the wall and the heater into the Beeper box outlet and youre good to go.

You will need a pager, of course. It goes inside the Beeper Box, mounted on a bracket next to the acoustic sensor. Three tones a few seconds apart are enough to flip the switch, so make sure the pager you have or you plan to buy meets that requirement. (A cheap pager we bought worked fine.)

Judith Technologies Tim Robertson told us some cellphones might also trigger the box but, then again, cellphones are more expensive than pagers and the batteries dont last as long. Plus, if your cellphone is in your hangar, how are you gonna beep the box?

The box can be set up in a number of configurations, using a multi-position rotary switch inside the case. For example, it can be set to run from one to 12 hours-in one-hour increments-after which it powers off and resets. Other options include remaining on after beeper activation or toggling on and off with each beeper signal.

Beeper Bads
The problem with pagers, of course, is that like cellphones, they work in some areas but not others. The pager we bought, for example, worked fine in the metal hangar, even with the pager itself inside the metal Beeper Box. But fooling around with the thing in the office, the pager simply wouldnt receive the signal, no matter where we put it. Robertson told us hes advising customers to check pager coverage before purchasing the Beeper Box. A cheapo model like your kids carry might not work, but a pricier business pager might.

The pager market is intensely competitive and we had no trouble finding one for $20. Monthly service costs between $10 and $20, on the cheap side of the spectrum. Obviously, since youre after just the tone, you dont need a digital pager. (These days, most are digital anyway.)

Speaking of cost, this isnt a cheap device. It retails for $369 and by the time you add the pager and the first month or two of service, youll be into the party for more than $400.

Is it worth it? It depends. If the airport is 20 minutes away and you dont leave your pre-heater on all winter, the Beeper Box will save some pointless driving.

If you fly 10 trips requiring pre-heat, a $400 investment will save six hours of driving. If your time is worth $50 an hour, youll reach payback by the second winter. Were not sure electricity savings figure into the equation much, since the average electric pre-heater draws 300 to 500 watts, costing $15 to $20 a month for the winter pre-heat season, unless youre a hapless California resident where electricity is no longer available.

Hey, It Works
Based on our trials, the Beeper Box works as claimed, assuming the beeper does its part. Robertson says the company is still improving the device and not yet producing it in large numbers.

The model sent to us for test purposes appeared robust and well made, although the switch labels were obviously not mass production items. Nonetheless, Judith Mountain can sell you one.