In a market dominated by big-screen primary flight displays it’s easy to see why high-priced HUD technology hasn’t gained traction in large numbers for small airplanes. But smartphones have grown larger screens that may be useful for displaying nav data and don’t take much space in the cabin.

And that’s why Sporty’s has been marketing the Hyperion smartphone reflector product, which puts the phone data at eyeball level on the glareshield by reflecting on a screen that mimics that of a HUD. It’s dirt cheap at only $19.95, but one problem is it doesn’t work with the most popular aviation apps. 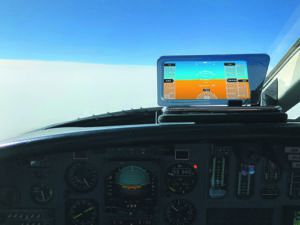 The Hyperion by Dellran smartphone navigation heads up display is really focused on ground navigation in vehicles, but the concept can work in anything—including aircraft. The unit is sold to work with the Hudway Go app, but for use in the aircraft it works with the Appareo Stratus Horizon Pro app.

The device needs no power; it simply reflects what is on the screen of an iPhone or Android device onto a 6.5-inch angle-adjustable mirrored screen. The idea is to reflect backup attitude data onto the screen, turning any smartphone into a HUD-like screen that’s positioned on the glareshield in an area that’s more convenient than, say, your lap. The viewer is partially transparent and the 45-degree angle adjustment seemed to be right for a decent HUD-like image. The specs says the viewer produces a 20 percent larger image than the phone’s display.

Out of the box the device, which has a 6 by 3.75 inch flat base, is easy to set up. All you do is stick the supplied transparent reflection film to the front side of the organic glass board. The base/smartphone holder doesn’t hard attach to the glareshield, but instead sits on a non-slip mat, to keep it from moving around. And it’s sticky enough to hold it in place, but the smartphone just rests (face up, of course) on the base so the screen can reflect on the viewer.

I tried the device with an Apple iPhone XR in an Otterbox Defender  screenless case and it fit nearly perfectly. The trouble, though, is that any sizable amount of turbulence can shift the phone partly off the base. In a crash the last thing to go through your head might be the phone.

As we go to press the only aviation nav app that’s compatible is the Appareo Stratus Horizon Pro, from the company that makes the Stratus ADS-B products, of course. What’s unique about this app is that it has  a Mirror Display mode for reverse imaging. The app requires a Wi-Fi-enabled Stratus ADS-B receiver for the AHRS display. No, ForeFlight and Garmin Pilot won’t work, and John Zimmerman at Sporty’s (which has passed on selling high-end HUDs) called it straight.

“We’re hoping this dead-simple and affordable product inspires other app developers to add a HUD/Mirror mode to their apps,” he told us. Visit www.sportys.com.