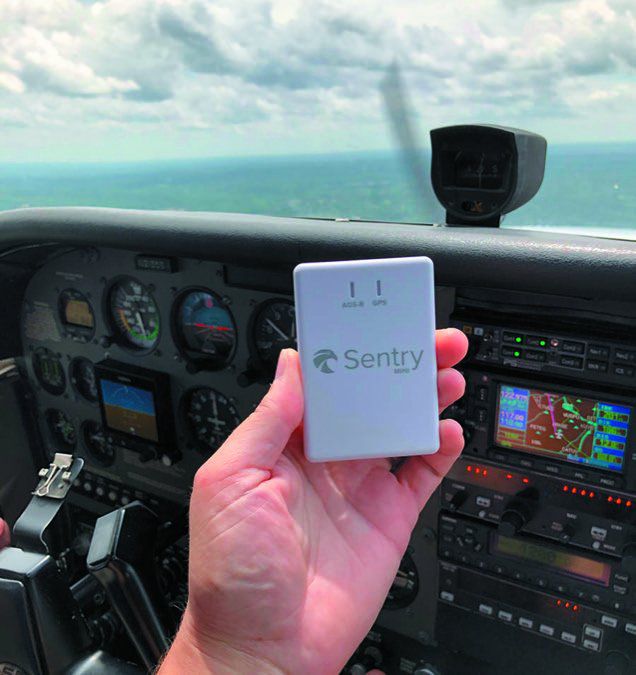 ForeFlight thinks there’s still a sizable market for budget-based portable ADS-B receivers so it came to AirVenture last month with a new model: the Sentry Mini. Think of the Mini-priced at $299-as the little brother of the full-sized Sentry receiver ($499) the company brought to AirVenture last year.

Like the full-sized Sentry, the new Mini is made by Montana-based uAvionix and has dual built-in antennas for receiving weather and traffic on both 978 MHz and 1090 MHz frequencies. The product’s name suits it well-the device is 3.3 by 2.3 by 0.6 inches and weighs 0.1 pounds. Check that against the full-size Sentry, which measures 3.25 by 2.25 by 1.25-still compact.

The main reason for the Mini’s slightly smaller footprint is it doesn’t have an onboard battery. You’ll need to plug it in to any 5-volt USB-C power source using the supplied cable.

No Ahrs Built In

The Sentry Mini is slightly scaled back on features compared to the full-sized Sentry. It doesn’t have built-in AHRS or the CO detector. It does have a built-in GPS receiver for providing position to iPads that aren’t so equipped.

If you plan to use ForeFlight for backup flight instruments the Mini probably isn’t the device for you because it doesn’t have the AHRS sensor to feed the app. It does, however, support the full range of FIS-B weather and data, including animated NEXRAD, METARs, TAFs, AIRMETs/SIGMETs, PIREPs, winds and temps aloft, TFRs, NOTAMs, SUA information, turbulence, lightning, cloud tops and center weather advisories.

We like that the Mini has onboard memory to support ForeFlight’s Weather Replay, which provides automatic storage of up to 30 minutes of FIS-B data. That means you can Sleep the iPad and then receive a burst of updates when the iPad wakes.

If there is more than one iPad connected, each iPad will be synced to have the same data replayed. ForeFlight will also animate ADS-B radar, looping up to 30 minutes of radar while in flight.

If you fly with multiple tablets or with other people, the Mini supports up to five devices on its integrated Wi-Fi network, as well as Cockpit Sharing, a feature that enables users to share routes between all devices on the Sentry Mini’s network. That works for a copilot or instructor to follow along and monitor weather and traffic.

We’re not fans of hanging portable devices on the windshield with suction cups, but the Mini is small and light enough where it might not be too much of a hazard in a crash or turbulence. We like that it comes standard with a high-quality and sturdy RAM suction mount.

Don’t plan on using the Mini with your Garmin Pilot app (or any other third-party program) because it only works with ForeFlight. But the device is compatible with all ForeFlight subscription plans. ForeFlight said the Mini will be sold exclusively by Sporty’s.

We covered all of the available portable ADS-B receivers in a roundup article for the December 2018 issue of Aviation Consumer.