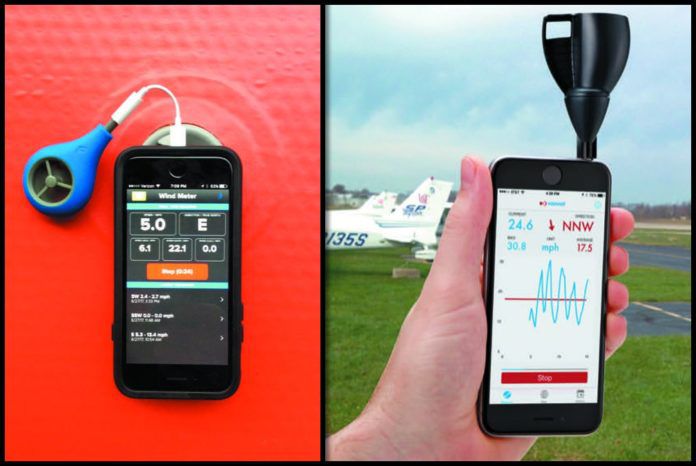 I reviewed Vaavud’s first-gen Mjolnir smartphone anemometer a few years ago and discovered its shortcomings, yet appreciated its utility on the water and land. I used it for seaplane flying on remote lakes where local wind reports weren’t available, and to compare aging ATIS recordings on the home field. The disappointment was a lack of wind direction display.

That’s why I was anxious to try Vaavud’s newer Sleipnir, which has new measuring blades and a wind direction utility. Pleased with the company’s home weather station gear, I also tried the WeatherFlow WindMeter. It turned out to be the favorite.

First, the Vaavud Sleipnir. Distributed by Sporty’s, marine outlets and weather equipment suppliers, it sells for $59.95 and is one of several portable anemometers from Denmark-based Vaavud. I tried it with my current Apple iPhone 7, which doesn’t have a 3.5-mm audio jack for plugging the device in. While it’s still compatible with the phone, you’ll need to use the Apple Lightning/3.5-mm jack adapter.

An older iPhone, an iPad or an Android device is better matched because the anemometer plugs directly into the 3.5-mm jack, while an attachment clip secures it upright. Simply one-hand the phone into the wind and view the data.

Part of the problem is that the Lightning adapter’s pigtail is too short to clip the anemometer on the phone (especially with a fat case on it), so you have to hold the phone in one hand and the anemometer in the other—stressing the flopping cable.

I preferred the early model’s measuring blades. Inspired by more expensive professional anemometers that often have a three-cup design, the original Mjolnir (still in the product line) uses two rotating measuring cups with magnets built in the hub. The flatter blades made it easier to stash.;

Weighing 14 grams, the Sleipnir seems almost as durable and compact, but it uses two curved rotating blades and an internal optical recording sensor, rather than magnets. The specs say the omnidirectional meter records 44,100 measurements per second.

The anemometer isn’t sophisticated enough to measure wind direction on it its own, but instead uses the smartphone’s compass, accelerometer and GPS. Plus, it’s up to the user to position the anemometer into the wind for more accurate computations, and the device needs to sample the wind for at least 30 seconds.

While full featured, I think the Vaavud smartphone app is more than many pilots might use. It has a social media sharing feature and shows measurements taken from other Vaavud users, which you access from a worldwide map. Pilots might primarily use the data page, which has configurable units (MPH, knots, KM/H, M/S) and displays current wind speed, maximum speed and wind direction using a vector arrow and text stamp (SW, for example).

For each measurement, a gust value is calculated, which tells you how much the wind is varying. The weather savvy know this as turbulence intensity. Even I figured out that a low value (less than 10 percent) means the wind is pretty much blowing steady.

The Sleipnir comes with a soft storage case and the app is free. Contact www.sportys.com and www.vaavud.com.

The $39.95 WindMeter from commercial weather station maker WeatherFlow seems to have similar sampling accuracy, but it uses a turbine blade encased in a rubber shell, giving it a more rugged feel than the Vaavud. Compatible with Apple and Android devices, it uses the company’s Wind and Weather app (and iWindSurf, SailFlow and a few other specialty apps) for data display. But, it too requires an Apple Lightning adapter for iPhone 7 smartphones. The saving grace is the current model smartly comes with a stiffener to keep the anemometer anchored vertically, but it really needs a cleaner Lightning plug option, in my view.

The WeatherFlow device and app measures wind speed (average and gusts), direction (true and magnetic) and the app gives you the option to name or trash each sampling. After it takes the measurement, the app automatically creates an onsite report, which summarizes wind direction, average speed and peak gust. From there, you can edit a description and save it to the sampling log, plus you can send it as an SMS or email message. You can also view the data on a map (linked on a new webpage), using the View On Map command, where the wind data is overlaid with a vector arrow. For seaplane ops, this turned out to be a good utility for reading crosswinds on groups of lakes. Contact www.weatherflow.com.

A Win By App, Design

John Zimmerman at Sporty’s told me smartphone anemometers are niche products, but are gaining traction as they get better. My Sleipnir failed out of the box and I couldn’t talk or email with Vaavud for technical help. Luckily, distributor Sporty’s nails customer service and helped sort it out.

WeatherFlow, however, got back to me in a few hours to answer a technical question. For that, I’d buy a WeatherFlow product over a Vaavud.

What really sealed the deal is the WindMeter’s rugged housing, lower price, Lightning adapter stiffener and my preference for the utilitarian Wind and Weather app.