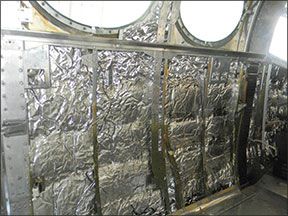 It’s no news to anyone that general aviation airplane cabins are loud. After all, the engines have minimal mufflers, the thin aluminum skins vibrate like a drum, the exhaust exits ahead of the cabin, the tail cone is shaped like a loudspeaker aimed at the occupants, the windows are thin, the prop tips are moving at a high percentage of Mach and the manufacturer’s sound insulation is minimal.

How noisy are they? OSHA did extensive sound intensity testing and came up with a time-weighted average of just over 86 decibels (dBA). However, it was examining the work environment of flight instructors, so nearly half of the testing was done at less than 60 percent power. Testing by Dennis Wolter of Air Mod, an aircraft refurb and renovation shop on Clermont County Airport in Batavia, Ohio, in a number of airplanes revealed an average of 92 dBA at the pilot’s ear at 70 percent power.

Not only does that noise level cause hearing loss, it also increases the fatigue level of the pilot, potentially affecting his or her ability to make good decisions and fly the aircraft well.

What can be done to reduce the cabin noise level? Our survey found that the most cost-effective approach is to install sound-absorbing material on the inside of the skin of the airplane around the cabin and to the rear baggage curtain. We think that the maximum economical level of reduction is on the order of 10 dBA (that’s cutting the sound intensity by half—more on that later), which is significant—headsets are still going to be necessary. We don’t believe any ads that claim to bring the noise level down to that of a car.

Sound 101
The force of sound waves is measured in decibels—and the scale used is logarithmic. For reference, while individual reaction to sound intensity varies, 70 dBA is often the basis for sound comparison—it is about the level at which most people keep the audio on a TV. Sound in the high 70s dBA is annoyingly loud to most people; 80 dBA is twice as loud as 70 and is the sound level of garbage disposals; 90 dBA is four times as loud as 70—it’s the sound of a motorcycle passing 25 feet from you. Sound at 100 dBA is eight times as loud as 70 and will cause serious hearing damage in as little as eight hours of exposure; 110 dBA is 16 times as loud as 70 and is what you hear during a runup with the windows open.

Sources of Noise
Because weight is the enemy of general aviation aircraft design, much cabin noise is the result of efforts to reduce weight. The light aluminum skin vibrates and resonates with the energy generated by each passage of a prop blade. Each power pulse from the engine, blasting out of the exhaust, further activates the aluminum. The movement of the airplane, shoving the air out of the way, generates significant noise—if you’ve flown a glider you know the claims of “silent flight” just aren’t true.

The cabin air distribution system can be a major contributor to the noise level, especially on airplanes where the intake is within the prop arc and there are sharp turns in the path the high-speed air has to follow.
What can be done to cut the racket? A combination of three approaches: reduce the intensity of the sound at its source; reflect the sound away from the cabin and absorb the sound before it gets to the cabin.

Attacking the Sources
Prop noise can be reduced by turning the prop slower; using the POH, select the lowest RPM for the power setting you want on an airplane with a constant-speed prop. Don’t worry about an “oversquare” power setting; that OWT is a myth. Many airplanes have a particular RPM at which overall vibration is lower, allowing for a lower perceived sound level. Switching to a three-blade prop reduces cabin noise because the blades are shorter so the tips are moving more slowly and generating less noise. Three-blade props usually mean smoother operation, a benefit for the pilot and airframe.

Fixing collapsed or partially blocked ductwork can reduce cabin noise. According to Dennis Wolter, the ventilation system of Cessna singles can be quieted by sticking plastic dishwashing pads such as the S.O.S Tuffy in the cabin air inlets in the wing leading edge. The plastic strands slow down the air.

Noisy Cessna can-style air vents can be replaced with Precise-Flow Air Vents offered by Sporty’s for $450.

Time spent on sealing the cabin doors may prove worth the investment. To further reduce cabin door noise, we like inflatable door seals, such as Bob Fields’ “Ultimate Inflatable Door Seals, (www.ultimate
doorseals.com). They’re a bladder that goes around the door and inflated either by hand or electrically once the door is closed. Prices start at just under $400 for manual systems and top out at $1650 for electric inflation on all the doors on a 36 Bonanza or 58 Baron.

While we have not seen hard data on door seal noise reduction, in the Piper and Cessna twins we’ve flown that had them, we could clearly tell the noise level difference when we waited until cruise to inflate the seal. We have been told that a pilot generally cannot detect less than 2 dBA sound change in flight.

Sound Damping
Our survey of soundproofing products and techniques lead us to the conclusion that the most cost-effective method is sound damping by installing a sound-absorbing material against the inside of the skin of the airplane, completely around the cabin. For a little more money, using a material that is specifically designed for sound absorption combined with a foil that reflects sound away from the cabin just about doubles the effectiveness.

From an economic perspective, the time to install soundproofing is when you’re upgrading the interior or avionics so at least part of the cabin is going to be opened to the stringers and skin.

The first step in installing any sound damping material is to remove the interior, peel off the factory-installed material (usually a thin layer of fiberglass) and whatever adhesive was used. Every shop we interviewed told that the odds are high that there will be corrosion caused by the moisture-wicking effect of the factory soundproofing and the adhesives that were used to install it. We learned that corrosion treatment and soundproofing go hand in hand.

We agree with Air Mod’s approach to soundproofing—the stringers and skins are chromated before the soundproofing material is installed.

Materials
Our survey of the field led us to the conclusion that you tend to get what you pay for with soundproofing materials. You also add more weight to the airplane, something to consider.

At a basic level, plain old fiberglass does a reasonable job for a reasonable price. Air Mod’s Wolters told us that he considered fiberglass to be the best bang for the buck. An inch to 1.5 inches of lofted fiberglass costs $200 for materials and requires an experienced technician about eight hours to install in a four-place single. It adds five to six pounds over the weight of factory soundproofing in a Cessna 182 or Beech Bonanza and, in tests by Air Mod, gives a four-dBA noise reduction.

Derek DeRuiter of Northwoods Aviation in Cadillac, Michigan, told us that he got similar results from ¾ of an inch (1/2 inch under the floor) of Super Soundproofing foam from Aircraft Spruce (www.aircraftspruce.com) on a Cessna 180. He described the noise reduction in flight as surprisingly quieter and said there was an unexpected benefit in that the airplane was a lot warmer in winter. The next step up in noise reduction involves using the three-layer composite material from SoundEx. It consists of a layer of sound deadenerthat rests against the skin, an absorbent center layer and a reflective foil on the cabin side to reflect sound back into the absorbent layer. For a four-place single, Wolters told us it costs about $800 for materials from SoundEx and a pattern kit from PlanePatterns. Installation takes eight hours of experienced labor. AirMod’s measurements show a six to eight dBA noise reduction for a weight increase of 10 pounds over factory soundproofing. Keeping in mind the logarithmic decibel scale, a six- to eight-dBA reduction is significant.

We note that the SoundEx installation is “press fit,” no adhesive is used and the material does not absorb water so it does not increase the corrosion risk to the airplane. Further, it can be removed and reinstalled easily during future maintenance. The top-of-the-line sound proofing from shops such as Air Mod is generally not an owner-assist job as it involves more sophisticated engineered materials — different materials for different locations on the airframe — that are cut to size and then installed in individual bags that have been cut to size and then installed. From Air Mod, the materials kit itself is $1800, however, the cutting and bagging involved means 30 hours of labor by experienced technicians.

Weight increase over factory original sound proofing is 22-24 pounds. The noise reduction, per Wolter’s testing, is 10 dBA, the maximum we feel can be expected for such an installation. A 10 dBA reduction means the noise level has been halved.

Windows
When it’s time to replace the windshield and windows, thicker glass can mean a cabin noise reduction. In our November 2013 issue we noted that testing Aviation Consumer performed on a Mooney showed a 1-3.5 dBA reduction. Dennis Wolters said his testing showed that going to 3/8-inch thick acrylic windows resulted in a two-dBA noise reduction on most airplanes except Cessna singles because of the flat nature of the windshield.

Conclusion
SoundEx’s Gene Shackelford said that most owners combine soundproofing with either an interior or avionics upgrade. That makes good sense to us. Once the cabin is opened up, the moderate additional cost of soundproofing with sophisticated material to get a six- to eight-dBA drop is worth it. We think SoundEx provides the best noise reduction for the money and we like that it is not glued to the aluminum skin.

While we don’t believe any of the claims that your airplane is going to be quiet enough to fly without headsets, noise adversely affects the entire body, so in our opinion, reducing it is a worthwhile investment.

We think an owner has to go into the process with open eyes, because it may reveal hidden corrosion that will be expensive to correct, and be prepared to pay to have the area chromated to protect it going forward.