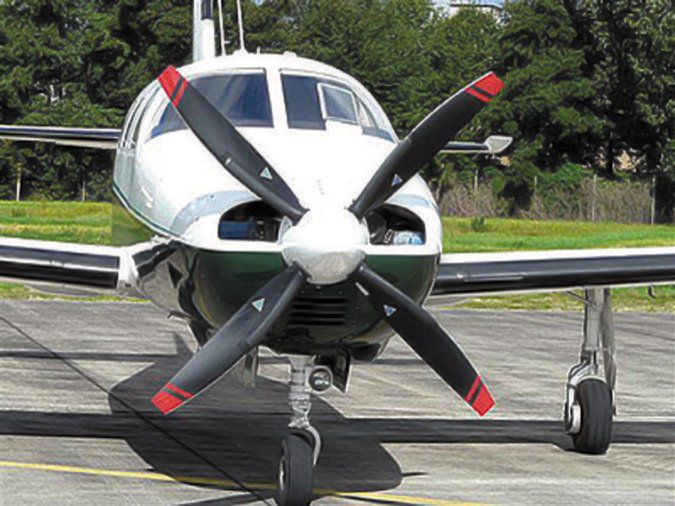 As the general aviation market slid downhill in the final 15 years of the last century, propeller manufacturers Hartzell (www.hartzellprop.com) and McCauley (www.mccauley.txtav.com) were faced with vanishing demand. Their response was to break away from their historic reliance on aircraft manufacturers and invent new products that would appeal to owners of existing airplanes via STCs.

Hartzell came out with its sharp Top Prop line at about the same time McCauley developed its aggressive-looking Black Mac line of three- and four-blade propellers. Both began getting STCs for as many airplanes as their budgets allowed.

The timing proved fortuitous as ADs, notably on Hartzell propellers, caused many aircraft owners to be confronted with mandatory prop overhauls. According to propeller overhaul shops, the rejection rate on props flown under 100 hours per year ran in the 60 to 70 percent range, due to corrosion and repeated filing until the blades were undersize. Often, the only solution for the aircraft owner was a new fan.

Prop shops told us that the initial competitive marketing by Hartzell and McCauley also resulted in owners buying new three-blade props just because they looked cool—sometimes in connection with new paint and interior.

We were also told that when the shop did the prop install, it wasn’t unusual for the technicians to observe that the old prop was frighteningly close to failure from long-term neglect. It’s one of the few times we’ve observed selling good looks also sold safety.

There were good and not-so-good side effects reported by owners who replaced their two-blade props with the three-blade version. On the good side, vibration went down—noticeably. As the three-blade prop was usually shorter than the two-blade it replaced, there tended to be reduced prop erosion in service. In addition, most owners reported slightly reduced takeoff runs and improved rates of climb.

On the not-so-good side of the ledger, adding an extra blade didn’t do anything to improve cruise speed. The extra weight forward meant slightly more tail-down force to compensate and slightly increased drag—as is expected when the center of gravity is moved forward. Few owners did before and after cruise speed analysis, so what we learned when we first looked at early three-blade prop upgrades was based on anecdotal information. Overall, for airplanes with engines putting out more than 200 to 230 HP, cruise speed was unaffected. For those with smaller engines, the airplanes appeared to lose from one to three knots in cruise.

By the time the millennium rolled over, the prop manufacturers had ended their aggressive pricing for three-blade props but had also started to develop scimitar-shaped blades with more complex airfoils that got rid of the reported cruise speed loss and, in some cases, improved cruise speeds.

Over the next few years MT Propeller (www.mt-propellerusa.com), long maker of lightweight composite props for aerobatic airplanes, branched out into the non-aerobatic piston airplane world in a big way.

MT also went the route of adding a blade to its props—if the OEM hung a two-blade up front, MT built a three-blade version for the airplane (or even four). As MT composite props have no life limit and are field repairable, they have proven attractive those owners looking to step up from their two-blade prop. Not to be left behind, Hartzell also developed a line of lightweight composite props.

We considerthe prop upgrade market to have matured now that the manufacturers are generally not pricing three-blade at a level below two-blade. While MT Propeller USA’s Peter Marshall told us that MT continues to see solid demand for its aftermarket props, we noted that a number of three-blade props that we’d seen offered in the past are gone from McCauley’s website. Accordingly, given that the “new” has worn off the market, what are the benefits, if any, of switching to a three-blade prop?

The answer isn’t simple, so we’ll approach it from several directions and we’ll say up front that the bottom line is probably going to be emotion—rather than cold, hard economics.

Moving to a three-blade composite prop means a weight savings of from 5 to 20 pounds over an aluminum three-blade prop—and a slight weight savings over the weight of an aluminum two-blade prop. Composites allow more subtle and precise shaping of the blade, which often means better performance—although propeller engineers pretty much knew what they were doing by the 1940s, so any performance increase is generally subtle and measured in the single digits when it comes to percentage improvement.

From an efficiency standpoint, the fewer the blades and the lower the RPM, the better. Piston general aviation airplanes have relatively low horsepower engines, so it doesn’t take a lot of blades to absorb it and convert it to thrust. Although a single-blade prop is the theoretical max performer, we don’t think there’s been one on a production airplane since well before World War II. By and large, two-blade props proved to be the best compromise between efficiency, thrust, weight and avoiding cavitation—where one blade advances into the turbulence generated by the previous blade during rotation.

We use $3000 as a rule of thumb price for overhauling a constant-speed, aluminum prop. The price goes up from there, especially if the airplane is not flown regularly. Prop shops told us that if it’s been a long time since the prop has been in the shop, there’s a good chance there will be enough corrosion in the hub to require replacement of internal components.

We were also told that aluminum prop blades generally will make it through three or four overhauls unless the prop is operated regularly on gravel. If a blade needs to be replaced plan on a minimum of $1600 for a used, serviceable blade and $3500 for new.

Composite blades can last indefinitely as they are never filed down as are aluminum blades. Where a nick in an aluminum blade means filing and changing the size and airfoil of the blade, the same damage to a composite blade is fixed by removing the glass, inspecting the area and rebuilding it to the original dimensions.

The economics of the replacement decision for a two-blade prop are such that if there are problems at overhaul time, the price of repairs and/or blade replacement can rapidly add up to the price of a new prop.

When we compared prices of replacement props for four popular airplanes we were interested to note that for less than 50 percent more than a new two-blade prop, you can have your choice of aluminum or composite three-blade props—and in one case, the three-blade prop was cheaper than a two-blade unit.

As withmost aircraft upgrades, spending the extra bucks for a three- or four-blade prop will not increase the resale value of your airplane by a like amount. If you are going to sell the airplane in the next few years upgrading the prop probably doesn’t make sense. However, if you are going to keep the airplane and have been regularly upgrading various systems and components, we think considering upgrading to more blades up front may be the right thing for you. We cannot predict what parts aren’t going to break because of the reduced vibration, but our experience is that the increased smoothness is noticeable.

We can’t put a number of the value of appearance, but we note that most pilots like the way airplanes look when they have more propeller blades. After all, we’re willing to pay a premium for an attractive paint job, why not for a cool-looking prop?

We also like the weight savings that comes with composites and the performance increase that comes with their being able to hold a more precise airfoil. For someone intending to fly regularly and keep an airplane for several years, the longevity of composite blades may make them cheaper to maintain than aluminum.

Finally, we think that the cruise speed losses noted with some early three-blade props have been erased with the scimitar and composite fans.

We think the prop upgrade decision boils down to emotion. And that’s OK. That’s what got a lot of us into airplanes to start with—they are way cool. So making them even cooler may be worth the price of admission.