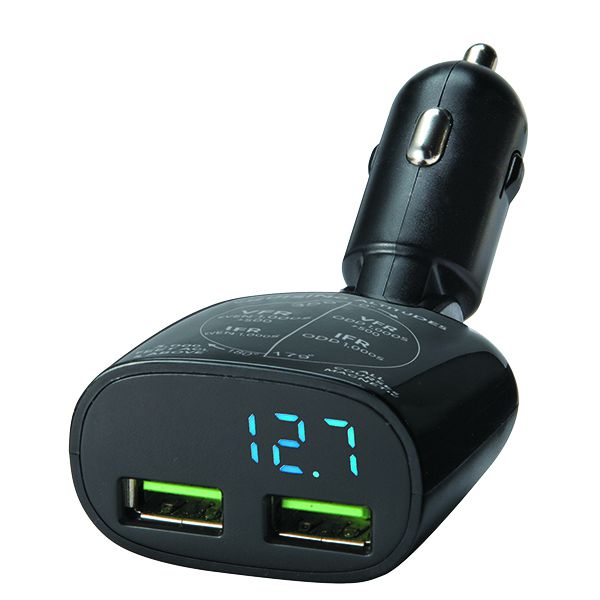 You’ll spend at least a few hundred dollars to have a panel USB charging port installed, and for many dropping big money on a panel upgrade it’s probably worth it. But for the rest of us, especially renters, plug-in chargers are the only options for a constant source of ship’s power for keeping portable gadgets topped off. I’ve been using two of the latest aviation-purposed chargers: the MyGoFlight Dual Digital model, and the Sporty’s Flight Gear Dual USB Quick Charger.

Yes, I know many pilots have good luck with cheap plug-in chargers sourced at the local auto parts or hardware store, but I also know that many of these devices inject unwanted noise in the audio system that caused an expensive troubleshooting tail chase.

You’ll likely hear the radios or intercom break squelch from RF interference, but both the Sporty’s and MyGoFlight products promise interference-free operation, and in my trials they succeed. First the MGF Dual Digital, pictured below.

Priced at $49.99 and equipped with both USB-C and USB-A quick-charge ports, the company says it exceeds the power consumption (36 watts) for charging late-model iPads while they are running aviation apps. The digital display shows the bus voltage coming in (it works with 14- and 28-volt systems) and amperage being drawn by the device that’s plugged into each port.

The device is fairly small, but has  a rugged aluminum housing. I tried the MGF charger in a variety of accessory ports—from old Cessnas to newer Cirrus models—and had no issues. But, when I plugged the device into the power socket of a Honda, it got stuck. Since then, MGF offered a caveat that it won’t fit some older receptacles. The display is small, but easy to read in sunlight and nearly perfect in a dark cabin. I like that is has a USB-C port—useful for charging my GoPro action cam on the fly. 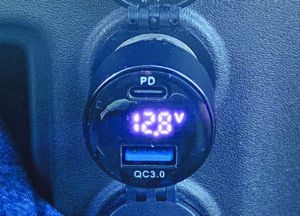 I have been using the original  Sporty’s Flight Gear USB charger for a couple of years and it has performed flawlessly.

The latest USB quick-charger model (shown at the top), priced at a fair $18.95, is improved because it has a swiveling body—useful if the receptacle is placed low in the aircraft’s subpanel, on the copilot’s panel or in tight spots in the passenger cabin. (It pivots up to 45 degrees.)

I wish the Sporty’s had a USB-C port, but it’s equipped with dual USB-A ports. While it’s less than half the price of the MGF, I would pay extra for USB-C charging capability. Each port outputs 3 amps of charging power (6 amps total) and the charger works in both 14- and 28-volt electrical systems.

The LED display, which isn’t quite as good as the one on the MGF device when splashed with sun, shows both bus voltage and amperage draw. When I used both of these devices in the same aircraft, I consistently noted 0.3 volts difference between the two, while the aircraft’s engine monitor split the difference.

The Sporty’s charger has an audible alarm, plus the display will flash when the input voltage drops below a set threshold, providing plenty of warning during an electrical system failure.

Like the MGF charger, the Sporty’s never emitted RF noise that was strong enough to detect in several aircraft audio systems while wearing Bose ANR headsets, including one aircraft that wasn’t exactly equipped with the modern standard.

Sporty’s also sells a $34.95 four-port USB-A charger that’s equipped with a 6-foot pigtail extension that can be routed to the passenger cabin. It has 8.2 amps of combined output.