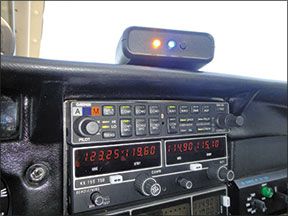 Is my radio transmitter working? At some point, that’s the question nearly every pilot will ponder when they check in on a frequency and get no reply. Most of the time, the radio is functioning properly, but other times it’s a real-world failure.

Electrical Efficiency Systems designed the $190 Trans-Ind radio transmitter monitor to take the guesswork out of these situations. It’s a portable unit that listens for radio transmit and voice modulation and displays the status using simple annunciation. It’s not perfect, but it might provide peace of mind, especially if you operate older equipment and are paranoid about communications failure.

Passive Detection
EES says there is nothing inside the 3.1 by 4.75-inch Trans-Ind housing that will interfere with any of the aircraft systems, including the comm radios and GPS receivers. Instead, the passive system simply listens for radio frequency energy that’s emitted from the onboard antennas (the system detects the 118 to 137 MHz frequency band). The indicator won’t respond to smartphones or other portable electronics (unless it’s a portable comm transceiver). The unit will register transmissions from a 121.5 MHz ELT system.

The Trans-In operates on a single 9-volt battery that can last upward of 100 hours. EES suggests mounting the unit on top of the aircraft glareshield, but you can also operate the unit from the palm of your hand. The company cautions that small aircraft vary widely in the amount of radio energy that filters into the cockpit, so before mounting the unit you’ll want to test for dead spots that might not trigger the transmit indicator, and mount the unit as high as possible.

We found the Trans-Ind simple to use. There’s a single power button on the front of the case, in addition to two sunlight-readable LEDs.

When the unit powers up, both the blue and yellow LEDs blink during the self-test. When the power is on, the blue LED dimly illuminates while the unit listens for RF energy.

Keying a transmitter will illuminate the yellow LED, much like the TX indicator that’s on many comm radios.

The real advantage of the Trans-Ind, however, is the modulation indicator. As you talk through the microphone, the blue LED comes on, confirming that your radio has both transmit key and voice output. The Trans-Ind is also used to indicate a stuck microphone, made obvious by an activated yellow LED.

Now the warts. The unit could indicate transmissions from other aircraft on the ground and it can also be activated by fixed transmitters, such as ATIS or other continuous sources of transmissions.

Still, we think the Trans-Ind could be useful for preflight testing and for initial diagnostics before surrendering the aircraft to an avionics shop. Visit www.eesys.co, 503-490-5852.