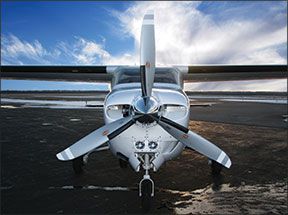 Vitatoe Aviation’s turbonormalized P210 conversion may just have turned the Cessna P210 into the airplane it should have been all along. I’ve liked the P210 ever since I first flew it in 1979. It’s fast, carries a good load, has honest handling and the pressurization spoiled me.

However, the first part of any flight always seemed to be a battle between a decent rate of climb and engine cooling. When going fast enough to keep CHTs out of the stratosphere, the rate of climb was usually around 400 or 500 FPM. It took a lot of fuel and time to get to altitude. This mod fixes those problems and turns the airplane into a 200-knot cruiser.

Successful entrepreneur, former drag-racer and self-described gear head, Larry Vitatoe faced the heat-versus-rate-of-climb conundrum with his P210—he liked everything about the airplane except for the constant battle with cooling during the climb and the need to sometimes step-climb on hot days.

About four years ago, when it was time to overhaul the TSIO-520 up front, Vitatoe decided to act on his idea of getting an STC for a turbonormalized IO-550P in the P (and T) 210. He reasoned that by installing the high compression ratio IO-550 and using the existing turbocharger but only using it to turbonormalize the engine—maintain ambient sea level manifold pressure up to altitude—rather than ground boost the engine—boost the manifold pressure above ambient—the engine would run cooler and more efficiently than the TSIO-520 in the T and P210.

The installation
Over the course of two-and-a-half years, they came up with an installation that mated with the existing Inconel exhaust system used by Cessna. They used dual intercoolers to keep induction air temperatures to not more than 135 degrees F, moved the altitude-compensating fuel pump to a location where it was easily accessible and adjusting fuel pressure would no longer be a four-hour job. They then put the induction system on top of the engine where it would be in a cooler operating environment and used the throttle body from a TSIO-550 engine.

The existing McCauley prop could not meet vibration requirements in the new installation. Hartzell, “just up the road from us,” as Vitatoe put it, was willing to get involved and came up with two scimitar props, one 80 inches in diameter, the other 82 inches. Both props cut takeoff noise by 2.5 decibels, which doesn’t seem like much, but makes a noticeable difference for a 210 in an increasingly noise-sensitive world.
Atlantic Aero’s six-point engine mount, similar to what Cessna used for the last model of the 210, the R proved to reduce vibration and was chosen for the Vitatoe mod.

The STC for the conversion for the P210N, T210L, M and N was received in the summer of 2011. Vitatoe performs the changes at its facility at Pickaway County Airport, Circleville, Ohio. While I was there, the hangar was full of airplanes being converted. I was told there is a short waiting list. The conversion requires 14-16 weeks. Thus far, the P210 has proven to be the overwhelming favorite for the mod, with only one T210 having undergone the engine swap.

The mod involves a number of other changes, such as some rework of the cowling and nose bowls, and the tail pipe exit area of the lower cowling.

The STC requires that the airplane have an engine monitoring system that displays and records engine data. Most coming in for the mod already have an acceptable engine monitor. If not, Vitatoe Aviation is an AuRACLE dealer.

There are additional options available—the engine will handle dual alternators, dual vacuum pumps and air conditioning. Vitatoe can install electric or fluid prop deicing and some owners specify a new, rather than remanufactured, engine. For those owners who desire paint, interior and/or avionics when doing the engine upgrade, Vitatoe will help coordinate the work with shops that specialize in those areas.
Vitatoe noted that no two airplanes his shop has looked at are the same. Every one has gone through some changes since new, from avionics through auxiliary fuel tanks to TKS deicing systems. It is one reason that every airplane is weighed as a part of the engine mod—Vitatoe went on to say that every airplane has also weighed more than its owner thought, by as much as 100 pounds.

Weight
The engine change adds from 7 to 35 pounds to the airplane, depending on the equipment on the original airplane. The airplane I flew had a post-mod empty weight of 2771 pounds, which Vitatoe said made it one of the heaviest as it had a number of options, including air conditioning and a radar pod. With a 4016-pound maximum ramp weight, its useful load is 1245 pounds. Loaded, with full standard tanks—89 gallons usable, 534 pounds—711 pounds can be carried in the cabin, three 200 pounders plus over 100 pounds of stuff.

There is an interesting limitation on the installation—at power settings above 26 inches MP, fuel flow must be either greater than 30 GPH or less than 17.6 GPH.

Vitatoe told us that when he started working on the conversion, his target was a 200-knot cruise at FL200. My numbers showed that he exceeded his goal.

Preflighting the airplane is conventional. A person familiar with P210s will notice that the cowling has been cleaned up, a non-icing NACA scoop is used for induction air and the prop bears the distinctive look of the Hartzell scimitar design.

I’ve flown various IO-550 conversions and have found them to be remarkably smooth—Vitatoe’s P210 installation proved to be no exception. It was dead smooth at all power settings from idle up.  Even running well lean of peak (LOP), it simply never ran rough, although I should probably credit the GAMIs for the LOP smoothness.

Takeoff comes after a minimum of 100 degrees F oil temperature and 200 degrees F  CHTs are reached. At full throttle, the automatic waste gate control sets the manifold pressure and fuel flow to 31 inches and 37 GPH, although there may be a small overrun on the first takeoff of the day. There is a pop-off valve that takes care of any significant overboost.

Takeoff and Climb
The airplane was loaded to 200 pounds below gross weight on a day that was 15 degrees F below standard temperature. Takeoff acceleration was slightly better than I would expect in an unmodified P210, with more right rudder required. More rudder trim was required when transitioning to climb, cruise and descent than in an unmodified P210.

All power controls are moved full forward at the beginning of the takeoff roll and left there until leveling off in cruise. I did not have to touch anything until leveling off at FL220, which, in my opinion, is how power management should be—there are enough demands on the pilot’s attention, particularly when departing from a terminal area.

Other than a greater need for rudder, handling is pure Cessna P210—well-behaved and harmonized in all axes throughout the envelope, but heavy. The airplane is utterly predictable and will handle impressive crosswinds. The controls are effective—it just requires effort to displace them. That solidity and predictability may be one of the reasons the airplane has long been popular.

Performance
Once the gear and flaps were up, a cruise climb of 120 knots was set. I did not see less than 900 FPM all the way to FL220, even though the airplane picked up about a quarter inch of rime ice between 6000 and 8000 feet. The time to FL220 was just over 20 minutes. In my experience, an unmodified P210 would take twice that time.

The hottest CHT I saw in the climb was 320 degrees F, and the hottest inlet temperature I observed was 90 degrees F.

At FL220, I made cruise speed in runs in opposite directions. In an airplane with a radar pod and a light layer of rime ice, cowl flaps closed and power set to 326 HP LOP (30 inches MP, 17.3 GPH and 2500 RPM), the speed settled at 152 knots indicated, 212 knots true. TIT was 1540 degrees F; the hottest cylinder was 358 degrees F. Vitatoe said that when the OAT is above standard, the CHTs will run at what he considers to be max—380 degrees F—and it may be necessary to partially open the cowl flaps.
At this altitude, the TN P210 is within 10 knots of being as fast as the advertised speed of the Silver Eagle turboprop mod of the P210 while burning 7 fewer GPH.

I also did a check at 8000 feet, as it is often asserted that turbos are a liability below 10,000 feet. With the lower exhaust backpressure of turbonormalizing versus ground boosting, I am not convinced that cruising at lower altitudes hurts economy. My observations, again at 262 HP, were a TAS of 175 knots at 17.4 GPH and a highest CHT of 297.

While higher is generally more efficient, even with a 37 GPH fuel burn in the climb, lower isn’t going to eat you up with fuel bills, especially when there are strong headwinds up high.

Conclusion
It looks like Vitatoe Aviation has hit a long ball in converting the P210 to a turbonormalized IO-550. The TN IO-550 has been a success in the Bonanza and Cirrus—it looks as if this can continue the trend.
With prices of P210Ns under $200,000, the idea of being able to have a pressurized single that cooks along at turbine speeds in the flight levels for $300,000 is attractive.