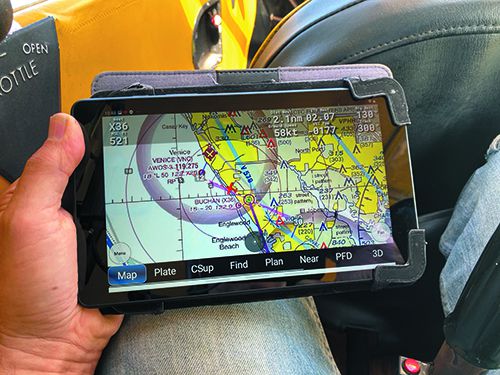 If the app market hasn’t quite reached stasis, it must be close to that. Our recent surveys suggest that only about 11 percent of pilots don’t fly with tablets or apps of any kind and that doesn’t leave much headroom for new entrants or for expansion of established players. So, buyers may be shifting from one app to another in search of something better or just different.

Two apps that we missed in our survey in last month’s issue are iFly GPS and an Android freebie called Avare. Both of these drew quite a few survey comments and thumps for us for missing them. (It’s an established rule of editorial surveys that at least something has to be overlooked.)

Our mea culpa is this brief review of both of these apps. Given that feature bloat is a recurring complaint from app users, both of these may have merit as capable but easier-to-use alternatives. Pricewise, Avare is a slam dunk, since it’s free. iFly GPS is competitively priced; cheaper than ForeFlight, comparable with the lower tier of Garmin Pilot, but no free or low-cost VFR option as WingX Pro offers.

As apps go, iFly GPS is certainly one of the most platform flexible. There are versions for iOS, Android and Windows, meaning it can run on tablets like the Microsoft Surface. It began life on a dedicated tablet and that’s still available as the iFly 740b at $599. This is a 7-inch, bright-screen device that, although equipped with an internal battery, requires ship’s power for regular use. (We reviewed it in the May 2015 issue of Aviation Consumer.)

Adventure Pilot offers the same capability in both iOS and Android versions for $79.99 a year for a basic VFR version and $129.99 for a combo VFR/IFR. You can run a 30-day free trial with all the data before buying. We trialed the app on a new Samsung Tab A 7-inch tablet with 32 GB of storage.

And speaking of which, that’s enough storage for this app and then some. Because it draws the charts from data not raster scans, it’s pretty stingy with storage. I loaded charts for the U.S. east of the Mississippi and used only 4.7 GB of the tablet’s storage. The charts draw in crisp detail with little latency when scaling, although they soften at extreme scales.

Like so many apps, iFly was born of need when co-developer Walter Boyd planned a trip to Mexico and found nothing appealing for navigation and planning. One design goal for iFly GPS was large buttons and simple operation. It hits both marks, in my view, but with one major annoyance: Even in still air, it occasionally doesn’t respond to the desired command or responds slowly. Another reader complained of this problem. It could be a function of the Tab A. This device’s performance is adequate, but it’s hardly top of the line. My iPad Air is both faster and more vibrant, but costs three times as much.

The iFly GPS default screen is a moving map that can be configured with sectionals, IFR low or high, a 3D EFIS or an instrument flight page. It doesn’t have split screen capability, such as WingX or ForeFlight, so it’s either the maps or the instruments. The app supports at least 11 ADS-B In hardware choices and thus will show weather and traffic. It also plots fuel prices and includes airport data from the Chart Supplement.

A recent addition to iFly GPS—and still in beta when I tried it—is a powerful flight planning tool called Real Plan. You tell it where you’re departing from and flying to, specify avoidances and altitudes and it figures out the optimized routing. This is, however, a work in progress. It worked well for short flights, but choked on longer ones, failed to complete the task and asked for help with waypoints. A second or third try did the trick. I suspect this will improve as the feature matures.

For a free app, Avare—pronounced uh-vair to rhyme with Univair—is far more capable than someone who hasn’t paid for it has a right to expect. It doesn’t have many high-end features, but what basics is does do, it does well. What it does best is not frustrate the user with multiple layers of dubious, hard-to-find tasks reached through multiple menus. If you used it once a month ago, you can pick up where you left off.

The app dates  to 2012 when it was created as an open-source basic moving map app by Boston programmer and pilot Zubair Khan. As with other such open-source applications, there is no company running or supporting Avare but a dedicated group of volunteers with support through the apps4av.net/site/ website. The site has a series of tutorial videos and there are more to be found on YouTube. The site doesn’t appear to be frequently updated. The newest posting I found was about a year ago, but there’s a link to an active forum for questions and comments.

Not that you’re likely to need much tutoring. Through happenstance and intent, the developers seem to have resisted the temptation to lard Avare up with rarely used and often unneeded functions. After all, what do you really need? The ability to navigate with a moving map, write and file a flight plan, download weather and ingest ADS-B In for inflight weather and traffic. Avare does all that, but not much more.

The site lists five compatible ADS-B In receivers including the Stratux (also open source), the Dual XGPS, the Freeflight FDL-978 and the Skyradar DX. I didn’t try any of these receivers but comments suggest they perform acceptably.

As with iFly GPS, the basic go-to is a moving map with a sectional background, but it can be set to other options including IFR low and high and terrain maps, to name just a few. You can layer on or off METARs, NEXRAD and plates.

Avare offers quite a bit of customization through a menu with nine items that allows weather preferences, instrumentation setup, display values and so forth. This includes reconfiguring some of the basic button functions.

There are 12 buttons along the bottom of the screen, each corresponding to a specific function, such as accessing plates, the Chart Supplement, flight planning, a flight instrument page … all the usual suspects. There’s also a weight and balance function with graphic capability, but it’s roll your own—no canned models already loaded.

If there’s anything I don’t like about Avare, it’s the flight planning function. I found it oddly designed and not especially intuitive. There are a couple of videos that explain it and you might need to watch them to burn the procedure into the gray cells. With enough use, I could probably get used to it. For what it’s worth, I don’t find any of the planning functions on other apps particularly well designed, either.

Overall, however, Avare is a winner and how can you not like a capable app that’s free? Well, I’ll tell you. If you’re an iPad user, getting used to the Android tablet requires some adjustment. The fact that it costs about half what an iPad does (variable with model) helps. A lot. With that in mind, if you have nothing at all or want to retire from paying for applications, you could buy a used or even new Android for pocket change. That alone makes it a worthy investment.