Over the past year or so uAvionix made a name for itself with the innovative skyBeacon and tailBeacon ADS-B Out solutions. These 978 MHz UAT devices, intended to replace a wingtip strobe and tail light, respectively, proved popular for owners wanting a cost-effective way to get ADS-B compliance without having to invest in a new transponder or install other equipment inside the aircraft.

With the tailBeaconX, we can now see that these products were just a run-up in the company’s product-development plans. Where the previous UAT devices would be fine for domestic U.S. compliance below 18,000 feet, they wouldn’t work in Canada or into the flight levels; for that, you need a 1090 MHz Mode S transponder. And that’s exactly what the tailBeaconX is. Moreover, uAvionix is working on Aireon compatibility—the GPS-based ADS-B equivalent Canada is considering.

We got our mitts on one of the first experimental versions of the product to try, as well as the company’s AV-20 control head/flight instrument. uAvionix is working through the certification process for Part 23 applications. Here’s a field report. 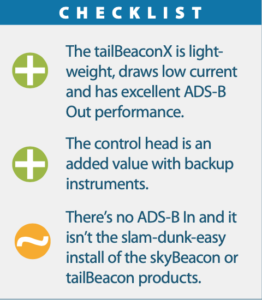 The buzzword with Canada’s space-based ADS-B proposal is diversity, which requires a dual-antenna transponder system and the tailBeaconX has it covered. The built-in antenna configuration is inherently “diverse,” with top and bottom elements that will be needed for Aireon compatibility. Like the other “Beacon” devices, the tailBeaconX crams a lot into a small space. Weighing just 3.5 ounces, the tailBeaconX is a mere 4.4 inches tall (at the wings of the two small blade antennas), and 4.4 inches deep, as measured from the trailing edge of the antennas to the connector. The depth inside the tail-light well is only 2.3 inches. To say it’s impressive to have a fully featured Mode S transponder and a WAAS GPS as well as antennas for both, and a bright LED tail light, in this one package probably understates the case. As impressive is the low power consumption: a flashlight-like half an amp.

It’s fair to wonder that if the entire transponder is in the tail light, how do you control it? That’s where the uAvionix (nee Aerovonics) AV-20-S and AV-30 come in. A two-wire RS-232 data connection is needed between the tailBeaconX and the control head, but that makes the system complete, allowing the pilot to control the transponder and provide it with baro information.

Obviously, the tailBeaconX is intended to replace a conventional tail light, like you’d find on thousands of Cessnas and Pipers. As with the previous tailBeacon, it’s powered by the nav light circuit. And that was the brilliance, so to speak, of the skyBeacon and tailBeacon products: They were close to straight swap-outs for the lights they replaced.

As we’ve reported previously, we were able to install these devices in just a couple of hours, including doing the paperwork.

Not so with the tailBeaconX, since it requires a data connection—and that could make the installation in a certified aircraft slightly more complicated than the previous tailBeacon, or quite a lot, depending on maintenance access within the airframe. Almost certainly this will be easier than a full transponder swap, but it’s not quite plug and play. Since it requires a set of wires to run from the tail to the instrument panel, it will be best to install the system while the aircraft is opened for other work.

As we went to press, the tailBeaconX was only available in the experimental version. That’s where I came in, offering to test it in my GlaStar homebuilt. Just one problem with that. OK, two. First is that my aircraft doesn’t have a tail light installed; it has the white rear-facing lights on the wingtips. And second is that the GlaStar design is a bit unusual in that it has significant overhang of the aluminum elevator above the short Fiberglas tail fairing. Think severe overbite without the need for orthodontia. Concerns of the tailBeaconX’s antennas getting blanked by the elevator and the need to build a tail light mount into the existing (and painted!) tail fairing led to another option. I mounted the tailBeaconX inside the tail cone on a composite bracket, which puts it well away from pretty much all the metal in the airframe, save for the control cables running down the floor.

Any concerns that the location would cause performance problems were proved misguided after my test flights. The instrument itself shows NIC and NACp scores right on the face. NIC is Navigation Integrity Category, and ranges from 0 to 11. NACp is Navigation Accuracy Category for Position, and also ranges from 0 to 11. In order to be considered functional, ADS-B systems need to score 8 or above.

In testing, the tailBeaconX not only averaged above 9 in flight (and hit 8 sitting in the hangar) but the FAA PAPR reports showed no flags. Likewise, ATC had no issues with the transponder even at lower altitudes. The tailBeaconX might be small, but it had no problems getting the job done.

Obviously, you’re going to interface with this transponder in an unconventional way. For my flight testing, uAvionix provided an AV-20-S head unit, which fits into a 2.25-inch instrument hole. By itself, it includes multiple clocks, a backup attitude indicator, a calculated angle-of-attack indicator and the new transponder interface. The head unit’s installation is as simple as providing ship’s power, splicing into the pitot-static system and mounting it up.

Both the AV-20 and the larger AV-30 are meant to come in from the back of the panel, and feature common D-sub connectors (a DB-9 for the -20 and a DB-15 for the -30) so that part’s easy. Incidentally, the tailBeaconX will interface with most common EFIS displays, so the control head is not a requirement for all installations. At least in the experimental class—for now.

The AV-20 powers up on the transponder page, which shows the squawk code prominently as well as NIC and NACp scores, mode annunciation and other menu items. To change the squawk code, you first have to press both lower buttons at the same time. (Touching one or the other scrolls through the available screens.) This step highlights the first squawk digit, which you can change through the left-side buttons. Then hit the right-side button to move to the next digit. When you’re done, press both lower buttons to accept. To change modes, continue scrolling with the right button until the mode is highlighted, then change it with the lower-left button. When not in the set mode, the upper left button tells the transponder to ident or, with a long push, to reset the squawk to 1200.

Overall, the control scheme is logical but not nearly as easy as using a traditional transponder. None of the buttons are lighted, and finding and then pressing both in the heat of turbulence simply isn’t as good as twirling four big knobs or jabbing a series of numbered buttons in sequence.

The AV-30 head unit, which also has a lot more functionality than the AV-20, portends an easier time of it; at least it has a rotary controller with a push-to-accept function.

Pricing for the tailBeaconX starts at $2199 for the experimental version, and $2999 for the certified version. Unless you have a compatible EFIS installed, you’ll need the head unit, for $895 (AV-20-S) or either $1595 (AV-30 experimental) or $1995 (AV-30 certified). So for under $4000 in certified form, you get a new, very light, extremely functional Mode S transponder as well as bare-bones backup instrumentation. For homebuilts, the tailBeaconX represents a tantalizing combination of a strong primary instrument (in the AV-30) and a super-light Mode S transponder for under $4000.

For certified aircraft, the pending FAA-approved version of the tail-mounted device might be a compelling alternative to traditional panel and even remote-mounted transponders, especially with its diversity status. We’ll keep tabs on the product as it progresses.