Whether it’s your first headset to get the flight training off the ground or a spare set for the back seat of the family airplane, it’s tempting to shop the used headset market for bargains on high-end models. But don’t expect much savings on desirable, current-production models from Bose and Lightspeed. 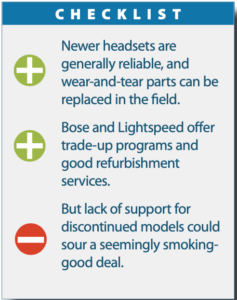 Face it, headsets get beat on. In a perfect world, they’re stored in their carry cases or in well-protected flight bags. But the reality is they’re often left in hot, cold and damp cabins—especially dedicated sets for passengers. We stress the audio cables by yanking them from the audio jacks, we step on them, we sit on them, we sweat in them and we twist, turn and bend their microphone boom. Eventually this takes a toll on even the finest-built set. Some high-end models are TSO and PMA certified, which perhaps makes them more likely to survive abuse. But not always.

“The major component that experiences a great amount of stress in any aviation headset is the microphone boom because users adjust it every single time they don and doff the set,” Hratch Astarjian, the manager of global aviation sales at Bose, told us. Astarjian also pointed out that many of us put additional stress on that mic boom by pulling it away from the face laterally, which no boom is designed for.

Bose (which keeps close tabs on real-world usage) witnessed this early on with the flagship A20 and made adjustments to the design, which significantly reduced this kind of damage.

The good news is that the majority of wear and tear is on a headset’s ear seals, headpad and mic muff, as a few examples. Teresa De Mers at Lightspeed Aviation reiterated that these components are designed to be easily replaced by the headset’s owner, and the company makes them available at a nominal fee.

The same can be said over at Bose, David Clark and Faro Aviation, which made these normal-wear parts easily accessible without having to send the set to the factory. As minor as this may seem, factor this cost and effort into any used headset purchase. After all, do you really want to use the same grubby earpads, headpads and mic muff that others have been using for years? Probably not.

Sometimes a trip back to the manufacturer for a repair or refurb is in order. This isn’t necessarily a bad thing as long as you purchased the headset right. At Bose, anytime a headset is sent in for repair it not only works to fix what’s broken and returns it to original performance specs, but replaces the ear cushions, headband cushions and the mic muff, plus it cleans the set up so it arrives back to the owner in good condition. We can vouch for this from our own experience. For headsets out of the original five-year warranty, the flat-rate repair charge is $225. Bose offers a limited 90-day warranty on repairs.

Bose quotes a seven- to 10-day turnaround time, which includes shipping. “Our goal is to have the set repaired and shipped back to the customer in a maximum of four business days, and we usually do better than that goal,” Arstarjian told us. Since the model A20 and in-ear ProFlight series are FAA TSO and EASA TSO certified, repairs must be done in similarly certified Bose repair centers.

Over at Worcester, Massachusetts-based David Clark, each headset sent in for repair is evaluated on a case-by-case basis, and its customer service department (which for years has been reeling in exceptionally high marks for consumer satisfaction) will provide the customer with an itemized repair/reconditioning estimate prior to commencing any work. Pricing is based on the condition of the headset and the costs of replacement parts. The company has earned a reputation for fair pricing (with in many cases minimal if any labor costs) and quick turnarounds. All models have a five-year warranty.

Lightspeed Aviation in Oregon charges a $175 flat-rate fee for repairs on sets that are out of warranty. This covers parts, labor and the replacement of “soft goods,” which are ear seals, the headband and mic muff.

In our research, in general we found that factory repair pricing on  the majority of late-model noise-canceling models is reasonable, but be careful with units that are no longer supported. Read on.

If you’re in the market for a used ANR model to replace your vintage set, there are some standout trade-up programs. For broken, discontinued models left with no factory support, it may be your only option.

That’s the case with the hugely popular and long discontinued

Bose X. Originally introduced in 1999, the set was dropped from the line in 2010. It’s arguably one of the best ANR headsets to ever hit the aviation market, but Bose was forced to stop supporting it because it can’t source replacement parts. Instead, Bose offers U.S.-based customers a $300 trade-in credit against a new A20 or ProFlight Series 2 model.

Lightspeed has a generous trade-up program (one trade per headset) to its Zulu 3 ANR and entry-level Sierra ANR models, and it will even take a Bose X ($150 credit), although Lightspeed told us that technically, it needs to be a functioning set. Lightspeed’s current Zulu 3 has a list price of $850 and the Sierra is $650.

The trade-up process is easily accomplished on the company’s website and the trade value is applied to the list price of the Zulu 3 or Sierra and credited upon receipt of the trade. A Zulu 2 has no trade value against the Zulu 3, but a Sierra is worth $250, and the original Zulu is worth $200. Older discontinued models, including the 3G series, Mach 1 series and the XL and K models, are all valued at $100 toward a new Zulu 3 or a Sierra.

Lightspeed’s Teresa De Mers cautioned against spending good money on these old models because of support issues. She pointed out that the majority of these old sets were already traded in for new models.

The company will pay $100 for any David Clark passive headset, $200 for a Sennheiser or David Clark ANR model and if for some reason you want out of a Bose A20 for a Zulu 3, Lightspeed will take it off your head for $400.

“The reality is that current-production ANR models like the Zulu 3 and even the older Zulu 2 have impressively high resale values,” De Mers told us. She’s correct. The ads we see on FBO bulletin boards and the shopping we’ve done on eBay suggest that well-cared-for models are priced within $175 or so of a new set. That savings could be worth it because many of these headsets may still be under warranty. Lightspeed covers the Zulu 3 for seven years, no matter how many owners it’s had, and others are covered for five years. It’s easy to figure out the warranty status. Ask a seller for the serial number and call the Bose or Lightspeed customer service departments

Still, we wouldn’t jump on any flagship model unless the savings was at least $200 unless the set has never been used, and for some that’s the case.

In our shopping we found a wide variety of aviation headsets on eBay, Barnstormers, Trade-A-Plane and on community forums. But be careful with discontinued models from brands like Sennheiser and Harmon—even the ones that performed well in previous Aviation Consumer trials. This includes the Harmon AKG AV100. This model originally sold for $1099 and up, had excellent audio quality, good Bluetooth performance but not the best ANR performance. We found a couple for sale at $700 each. No thanks. There’s also the Beyerdynamic HS800 and HS600 models, but these are long discontinued. Unless it was a smoking deal, we would avoid them.

But other models like the Flightcom Denali series (D30SP and D90ANR) could be worth it if the price was right. We found a few D90ANR models sold through the reputable Gulf Coast Avionics for around $400. Of course, where you buy is just as important as what you buy, and we would certainly feel more comfortable buying high-end models from long-established retailers than some individuals on eBay.

We also found a bunch of Bose noise-canceling models modified with aviation microphones, including the NFlightMic electret microphone kit. Again, it would have to be dirt-cheap, and we suggest checking the serial number with Bose for warranty status. Later-model non-aviation noise-canceling sets are pricey.

Obviously you don’t have a lot to lose when bargaining on low-end passive models. They’re simple (no electronics) and long-proven models from David Clark are our favorites for occasional use, especially for passengers. But flagship ANR models are another story.

If you own an existing vintage ANR model, instead of shopping the used market we think taking advantage of the Bose and Lightspeed trade-up programs is your best option. They’ll offer a warranty, you get a new set at a reasonable savings and there’s no risk. If you’re starting from scratch, understand there won’t be many—if any—deals on current-production flagship models.