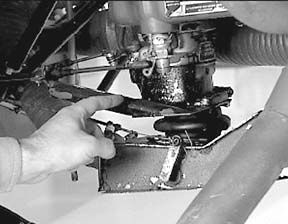 Despite the current move toward CD-ROM based training, some vendors still flog video. One of the newer entrants is Approach Aviations series, The Educated Owner. We took a look at Volume I: Preventative Maintenance. Practiced wrench swingers wont find anything useful here, nor are they the target market. But the owner who finds maintenance confusing and intimidating could do worse for an introduction into the arcana of airplane fix-it.

But be prepared to be underwhelmed during the opening sequence. First was the rah-rah talking head commercial about what a great thing owner-maintenance awareness is, delivered to the same people who just demonstrated they knew that by plunking down the money for a video about same.

Next came several minutes of static text reciting the relevant FARs, including reading aloud without substantive elaboration or visual interest all 32 categories of approved maintenance. Yawn.

Our initial annoyance evaporated, however, when the actual hands-on lessons began. Replacing a landing light is about the simplest, no-brainer maintenance task available to an owner and, logically enough, this is where the how-to starts. Here, the photography/narration for substantive portions was appropriate and useful.

Next up is a segment about general engine inspection, which we thought quite good. Instead of show-and-tell with discrete components, as is typical for this sort of presentation, on-camera expert Jeff Simon uses a systems approach, demonstrating how to check out and trace through the ram air, fuel system, induction air, exhaust, oil system and some electrical.

The video proceeds with good discussions and demonstrations on oil change, safety wiring and spark plug service. The final segment on tires and wheels was clearly explained and useful as well.

It got our attention during the penultimate discussion that the only replacement option mentioned was Unison. Having noticed early on a small Unison placard placed strategically on the fuselage of the demo aircraft, we werent surprised to find Unison listed as a sponsor in the end credits. Theres nothing inherently nefarious about this sort of tie-in but we would prefer to know about it up front.

Some of the substantive recommendations may be a trifle over done, such as the suggestion that an owner cant do anything without having in hand the parts and service manuals for that model, not to mention the FAA AC 43.13-1B Approved Practices manual. Well, the real world doesnt work that way. And its been our experience that quality oil analysis shops dont necessarily recommend submission for every change, as does the video.

As of this writing, Volume II on owner-assisted annuals is due out. Future installments are planned on pre-purchase inspections, overhaul, cosmetics and the like. We think Volume I of The Educated Owner series does a decent job of nullifying trepidation about owner-performed maintenance.

And, unlike other entrants into the aviation video market, $34.95 plus $4.99 shipping strikes us as a reasonable price, even if 12 of the 60 minutes is fluff. At normal shop rates, one landing light and an oil change should pay you back with interest. Contact Approach Aviation,24 Deer Path, Suite 6 Maynard, MA 01754, phone 877-564 4457/www.ApproachAviation.com.

CD-ROM Nav
We fully expect any day to receive promo for computer-based training on how to do logbook entries, since it seems that every other aspect of flying has been reduced to CD-ROM. Aviation Tutorials navigation trainer, titled, oddly enough, The Navigation CD-ROM, is one such offering.

The CD is broken into five categories of instruction. Obviously, VOR and NDB navigation lead the Hit Parade, including HSIs and RMIs. The final segment covers airspace, some communications and a chart review. The program is not pitched just to the FAA written, however, as evidenced by an entire module devoted to GPS nav.

The modules contain interactive components, which may permit the student to move the aircraft around the navaid and observe the resulting changes in instrument indication or which ask for the student to select position based on the displayed indication.

Obviously superior to static graphics, this capability even beats the average airborne demonstration, since the student can see both his position relative to the navaid and the aircrafts heading in relation to same at all times.

The explanations are clear, straightforward and well illustrated by animations or more text buttons sprinkled throughout the program. Important points are reinforced with painless pop tests.

The Navigation CD-ROMs production values are excellent and the program itself is simple to use and navigate. Our only gripe-minor, to be sure-was that the occasional sequential display was timed to the voice over, which is annoying if youre familiar with the topic and want to move on. But the majority of elements can be navigated, scanned or bypassed at the users pace simply by clicking next page. Nav CD even tucks in the occasional dollop of humor to keep things from getting too ponderous.

System requirements are the usual: 486 or higher, Windows 95, 4 MB RAM minimum, 2MB of drive space and a CD-ROM. Sound is needed for the voice-overs but you can operate with just on-screen text.

The Navigation CD-ROM is $99, plus shipping. The lowest discount we could find was a whopping $4 from several online pilot supply sites and variable shipping costs could wipe out the differential. Contact Aviation Tutorials Company, 245 Gillick St., Park Ridge, IL 60068, 847-823-5417/www.avtutorials.com.