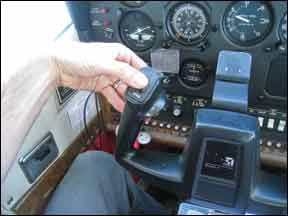 While almost every sci-fi epic has us navigating our way around the galaxy by voice command, the reality of controlling computers by voice has been a bit less impressive. It’s not that it can’t be done, it’s that there are inevitably errors. When your iPhone turns “Call Bonnie Smith Home” into “Calling Ronnie Schmidt Home” before you stamp the “end call” button, that’s not such a big deal. Having your GPS misunderstand where you want to go would be something else entirely.

However, the right combination of improvements in voice-recognition technology and a few focused voice-control commands make the VoiceFlight VFS101 system a success. That concept of a few, focused commands is important. For voice control to be worth the trouble it has to save you time or reduce your workload in a measurable way. VoiceFlight does both for users of the Garmin GNS 430/530.

Less Twist and Push
The system’s biggest trick is entering flight plans. Your clearance might come in as “KPWM ENE V93 CTR V270 ATHOS 1B1,” but a 430 needs all the waypoints that define those airways. That means pulling out a chart or asking some app like ForeFlight to decode it for you. The VFS101 will let you speak that clearance as is and do the decoding for you.

Well, almost as is. The way it works is there’s a button on the pilot-side yoke called the VoiceFlight Activation Switch (VAS). Assuming there is no active flight plan, you can start a new one by pushing and holding the VAS and reading off the clearance phonetically: “Kilo Papa Whiskey Mike ENTER Echo November Echo ENTER Victor Two Seven Zero ENTER …” and so on. The VFS100 beeps for every recognized waypoint, but you don’t need to stop speaking so long as you keep holding down the VAS button. Except for the victor airways, you are speaking letter-for-letter what you would twist and enter in the normal flight plan page—but even spelling them out is much, much faster than twisting.

Because this is a very limited set of words the VFS101 must know, the character recognition accuracy is virtually 100 percent with no voice training required. At least, that’s what we saw both in flight and at bench demonstrations.

There are a few oddities. The VFS101 uses the crossfill link to send its commands, so there’s a delay before they appear in the flight plan. The place to look if you want to watch the recognition as it progresses is the title bar at the top of the flight plan (where the flight plan name goes). This is also where any error messages come up (more on that in a moment). You also must remember to say “enter” after each waypoint just like you’d push enter if you were punching the waypoints in manually.

Interestingly, you don’t need to be on the flight plan page to edit the flight plan, although it’s strongly recommended you at least check once it’s in to make sure it went in correctly.

The other common trick is direct-to. This is done by holding down the VAS and saying something like “Direct to Alpha Bravo Charlie Activate.” In this case, the system confirms it understood you—not a bad idea as it’s about to change your active navigation. You double-click the VAS to accept the change and you’re now navigating direct. Two other commands requiring confirmation are “Start new flight plan,” which will erase the entire flight plan, and “erase remainder,” which wipes out everything from the selected waypoint down. You can insert and delete waypoints within the flightplan by voice as well.

Not a Creative Listener
It takes a few minutes to learn how the VFS101 works and be successful, but consistently getting the right sequence of pressing and releasing the VAS and saying just the right words takes a bit of practice. For instance, you must say “enter” after each waypoint but “activate” for a direct-to. Failure to comply will earn you a buzzer tone in your headset like you just gave a wrong answer on Jeopardy. If you botch it five successive times, the system will shut down and require a reset to try again.

Because the Garmin GNS 430 can only take 31 waypoint in its flightplan, expanding airways might fill the flightplan for long trips. The system will warn you if it runs out of space. There’s also an option to compress airways to show only the turn points, rather than every waypoint.

You can’t change radio frequencies by voice command. This is a limitation of the 430, but other GPS units VoiceFlight is looking at connecting to, such as the GNS 480, may have that option. The system also won’t let you delete an active waypoint and won’t accept voice commands when an approach is loaded, both for safety.

You also can’t do fancy things like direct to whatever the nearest airport is or activating a flight plan leg.

The system did have a “Dave, I’m afraid I can’t do that” moment when we first tried to go direct to a VOR that wasn’t in our flight plan. It understood Lima Echo Bravo as the Lebanon VOR, but wouldn’t accept the direct after we gave the double-click. Oddly, it would happily let us go direct anywhere else. After a system reset (it restarts in a few seconds) the system behaved normally with our other tests.

The company has jumped on the issue and determined what weird constellation of events caused the problem. That bug is now squashed. If this is an indication how they would deal with issues in the field, we expect VoiceFlight will get high marks for customer support.

Novelty or Necessity?
Past the gee-whiz factor, the system does make a tangible reduction in cockpit workload. Whether that’s worth the list price of $2995, plus five to 10 hours of labor to install, is impossible for us to quantify; the value would sit too much on personal preference. We’d be hard pressed to see how a short-haul, VFR flyer could get his money’s worth out of the system. But for a distance-crunching, IFR pilot, the airway expansion alone might be worth it.

There are a couple of additional factors to keep in mind if you’re considering the system. The VFS101 has its own navigation database, so that’s one more database to download and update in the aircraft. VoiceFlight offers this database for free right now, but reserves the right to change that policy in the future if they must.

VoiceFlight only provides a U.S. database at the moment, so the system won’t work for pilots in, say, Canada or Australia. Due to some certification issues, the system is available for 430W/530W (WAAS) units only in aircraft under 6000 pounds; however this may change in the future. The cert for legacy 430/530 GPS has no weight restriction. Bigger craft would need jetways as well as victor airways, which the system currently doesn’t have. As of this writing the system is STC’d for only the 182, but the AML is in approval right now for any aircraft under 6000 pounds.

We do think the company is one to watch going forward. Among the many projects they are investigating is a G1000 system and integration with Avidyne avionics, including their iFD540 nav/comm, DFC 90/100 autopilots and PFD/MFDs. One day you might be able to tell your  radios to switch to the Tower frequency, tell your autopilot to fly a heading of 090 and arm its approach mode, and then tell the MFD to pan and zoom over to the weather that’s causing all this turbulence that would have made button pushing all those changes a real pain.

Whether the success of that effort is more Star Trek—or more 2001—has yet to be seen.