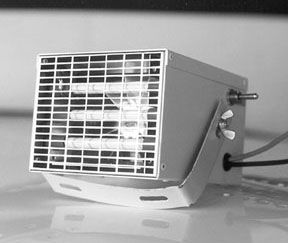 Winter flying in the northern tier is not for sissies. The ideal winter attire for occupants of my 1960s Bonanza is a pair of snowmobile pants and a t-shirt.

The stock heating system is woefully inadequate to warm a front seaters lower extremities during below-zero operations, while the greenhouse cockpit can create shoulder-high temperatures in 70s and 80s on a sunny winters flight. At night, the airplane is bone shatteringly cold, something thats not unusual for those of us who fly in extremely cold conditions.

Like all single-engine piston operators, I can warm up the cockpit a bit with a roll of Duct tape, masking wing root vents and air intakes. New gaskets for the cabin and baggage door help. But ultimately, that stock heater just wont do the job.

A Little Heat, Please
What to do about it? Owners of twins know about gas-powered auxiliary heaters such as the Janitrol. If you dont mind a gas-burning fireplace in the airplane and the unit is in good maintenance, you can heat the far reaches of an Aztec, Comanche or Cessna 310 with a gas-burning auxiliary.

But gas-burning furnaces take space, eat gas and weigh too much to be an effective heater for most single-engine piston airplanes, if they are even STCd for singles, which few, if any, are.

That leaves two options: Get the stock heater working as well as you can or consider an electric space heater. Many of us who fly in the north country pre-heat the cabin with small 110-volt ceramic cubes aimed up under the instrument panel to warm flight instruments and provide a cozy start to a winter flight.

But these are 110-volt AC units, suitable for ground operation only. Whats needed is a DC heater suitable for operation on available ships power. (And believe me, most airplanes dont have surplus power available so the amount of heat you can expect from a supplemental unit is limited.)

The DC Thermal Solar Aircraft and Auto Heater is a small (4 X 5 X 6 inches deep) lightweight (just under two pounds) box that houses three quartz tubes and a small fan and motor. A switch turns on two quartz tubes for low heat and three tubes for high output. The fan forces the heat into the cockpit. The heater is available for airplanes in 12 and 24-volt configurations, producing from 1212 to 2250 BTUs in the 12-volt versions up to 2389 to 6690 BTUs in the 24-volt models. Prices are reasonable, ranging from $169 to $499.

The heater can be mounted anywhere that infra-red forced air heat is useful, provided that an inch of clearance can be maintained between the rear of the heater and the nearest obstruction.

A U-shaped mounting bracket is furnished and can be placed above or below the heater, although the heater ought to be mounted so the three-way switch (low, high and off) is easily accessible.The heater must be wired through an electrical bus bar and fused (30-amp fuse for the 25-amp models and 40-amp fuse for the 30- and 35-amp models).

FAA certification requires that circuit breakers be installed. Obviously, the heater cannot be plugged into the socket of a cigarette lighter, which is usually fused for a maximum of 20 amps. Rheostats should not be used for the same reason. Were talking about a lot of current draw here.

Finally, the heater should be installed using the shortest length and largest diameter wire available. Voltage drop is the concern and even the slightest drop will seriously depreciate the BTU output.

FAR 23 stipulates that the aircraft generating system must have sufficient capacity to supply a running electrical load, which is defined as all electrical equipment except the stuff used intermittently, such as landing lights, electric flaps and landing gear.

The FAA considers direct current heaters an intermittent load, which not too causally implies the heater should not be used for long periods of time. In fact, the STC demands a placard be posted to remind pilots that the aux heater must be turned off during takeoff and landing operations.

Just what is meant by intermittent is open to interpretation but we think it means that the heater may be used to knock back the chill and then turned off and on again as needed.

Where to Put It
Although users of direct current heaters might prefer to install the units under aircraft seats, the distance from an engine compartment battery impacts heater efficiency. In other words, the closer to the battery, the better, to minimize voltage drop.

Heater switching is on the box itself and will be a nuisance to operate on an intermittent basis if its not easily accessible. Most operators will want to install a remote on/off switch on the panel. Finally, heat isnt free. A direct current heater will use a lot energy and unless your airplane is equipped with at least a 50-amp alternator, you will be borrowing electricity from the battery, especially at night, with lights burning.

According to DC Thermal, some operators of single-engine aircraft have installed 90-amp alternators. The power problems are of less concern for twins equipped with dual alternators. Then again, they probably have Janitrols.

My intent was to locate the heater in the front cabin, on the center console, to serve both the pilot and front seat passenger. Since radiant or infrared heaters dont heat the air, but instead, heat objects, I wanted the box as close to legs and feet as possible.

I wanted to use the shortest power wire possible to retain BTUs-about 15-inches – and I used a large diameter wire-number 10. All of this is wired through a 40-amp circuit breaker.

The Bonanzas exhaust muff heater will produce a temperature on the passenger side floor of 30-degrees when the outside temperature is zero. With some creative duct taping and a good seal on the cabin and baggage door, I can get the floor temperature up to 40 degrees F.

With the heater installed, I flew to the freezing level and turned the unit on to the low setting. My amp gauge pegged on the right side, indicating that my 50-amp alternator was fully employed. The amp needle stayed pegged, but my hand was warmed quickly when I sampled the air on the cockpit floor.

I turned the heater off. In a few minutes I felt the chill of outside air again, turned the heater to the high setting. The amp needle pegged again, I could feel the warm air, and I shut the unit down. If this was intermittent use, I was going to become one busy pilot on a chilly flight.

Theres no question that the direct current heater will produce heat. The question is, at what cost? A wintertime night flight uses a lot of energy to operate lights and radios and I would have a problem stealing heat from a battery that will have to provide energy for flaps and landing gear.

If I were to use a direct current heater confidently, I would want an alternator that could keep up with the draw and an amp gauge that gives me more information than my stock 1960 gauge.

I would also install a remote heater switch on the panel. The fact that the heaters convective warming so quickly abated when I shut the unit off tells me that I have some air leaks to plug.

Conclusion
The point of auxiliary heat is to supplement inadequate stock heating. Before I modified my electrical system, I would take the airplane to the shop and track down the heat loss.

Much can be done to improve old heating ductwork, the least of which is to be certain that carpeting and other restrictions dont impede the free flow of warm air.

Beyond cockpit door seals, check vents that become bent or obstructed and contribute to the heat suck. One way to inspect the airplane is to take it aloft, remove your headset and listen. If you hear whistling- and you probably will if youre flying a cold airplane-thats the sound of air leaving the cockpit. Get the air leaks stopped before deciding on a supplemental heater.

I recommend caution in modifying your electrical system. A 50-amp alternator is sufficient to keep up with my running load of electrical devices, with plenty of juice available for the intermittent loads. The DC Thermal unit pushes this to the max.

Im hesitant to install a 90-amp alternator just to serve an auxiliary heater. Although the DC Thermal heater only weighs two pounds, building an electrical system to support it will add additional weight. But if theres no other choice than to freeze, a larger alternator may be the thing to do.

The quartz tubes get hot and the heater is placarded to warn against allowing combustible materials near the front of the box. Even if the heater is mounted in the pilots view, I can imagine a busy flight when an enroute chart might find its way to the heater, so caution in operation is a must.

The heater is small, lightweight and well constructed. The design is simple and it will do the job under controlled cockpit conditions and with an adequate electrical supply. But its not a problem-free solution to a chilly cockpit.

-by Richard A. Coffey