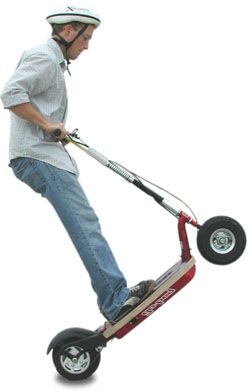 A light airplane may be a high-zoot ride, but when you arrive at the destination, youre just another face in the freckle-necked masses if you dont have ground transportation. Rental cars and cabs will do, but its hardly rare for an airport to have neither. Folding bikes are an option for the athletically inclined and we reported on these in the December 2005 issue.

But if pedaling three miles isnt your cup of tea, how about a motorized scooter? Although few are intended purely for aircraft use, the market hardly lacks for choices that can be pressed into service. As with folding bicycles, the two overriding criteria are size and weight, which translates directly into the ability to get the things into the airplane without blowing a disc in your back. Since these gadgets depend on stored battery power or a gas engine, the next consideration is practical range. Think of them as good for destinations within 5 miles of the airport, 10 miles tops. Beyond that, think about a rental car or a cab.

To sample the offerings, we borrowed some motorized scooters (gas and electric) that are foldable, portable (to varying degrees) and swift (if not a bit squirrelly). Thats another thing to think about: Fall off one of these things and you could suffer injuries more serious than just a scraped knee or elbow.

DiBlasi Express
The DiBlasi Express is a foldable gas-powered scooter that looks and behaves like the minibike you or your best friend had before mom took it away after you dumped it too many times in the driveway. And now, instead of wearing a circuit around the house, you can take it on the open road, which may or may not be an appealing prospect, depending on how good you think you look wearing knee and elbow pads.

The Express has a two-cycle engine that will propel a rider to 30 MPH, which classifies it as a moped in all 50 states. It can be registered, insured and has a VIN number, head and tail lights, turn signals and a speedometer. Its the only vehicle we looked at thats road legal.

Practically speaking, however, taking it on the road would be a gutsy move in any setting beyond the rural highway or sleepy village square. Its small tires reduce maneuverability to only slow and calculated turns-no evasive swerving allowed, as you need to do on a motorcycle from time to time. Acceleration, while not bad relative to its size and horsepower, is sluggish compared to everybody else on the road.

These behavioral traits are liabilities, in our view. However, the Express is fun to ride in open, more controlled areas, like from your hangar to the soda machine at the FBO. Hardy Huber, president of DiBlasi America, told us that while the Express can be stored in an airplane, its folded size (29 1/2 by 23 by 12 1/2 inches and dry weight of 68 pounds make hangar-based operation more feasible for most riders. It might be practical in a big-cabin airplane, such as a Cherokee Six or a Cessna 210.

We like the ingenuity that went into the Italian-designed Express folding mechanism. Folding can be accomplished in a matter of seconds and the fact that you can produce a road legal bike from a carrying case-even though it may give you a hernia lifting it into the cargo hold-is impressive. At $1995, however, the novelty may wear thin. (Contact: www.diblasi.com/)

Go-Peds
Offering the choice of gas or electric scooters is the Nevada-based Patmont Motor Werks, which produces the Go-Ped line. These first appeared in 1985, as a fusion of the old-school, foot-propelled scooter with an engine. The Go-Peds of today are still ridden in the same way; the rider stands upright on a low-slung platform with a T-handlebar in hand thats connected at a 90-degree angle to the stem and fork below.

Chunky rubber wheels with disk brakes protrude at either end. Turning is accomplished with a graceful leaning motion, like a skateboard or bicycle at speed. The wide tires travel smoothly, although they dont have a suspension like the DiBlasi.

However, because the center of gravity is lower on the Go-Ped-down near your feet, not up where your butt is on the more traditional bike-styled DiBlasi-the Go-Peds are more sure-footed through the turns. (It should be noted that the tester has years of skateboarding experience, a fluid riding style and consummate skill.) (Not to mention a vivid imagination-Ed.)

We tested both the gas-powered and electric models. The gas scooter has a 41.5cc two-cycle engine bolted to the back that drives the rear wheel with a chain. It will achieve speeds in the mid-20s, depending in the weight of the rider. But the vibration, the smell of gas and oil and the noise makes the experience comparable to riding a chain saw down the taxiway.

If ambiance, fluidity and lowering hydrocarbon emissions are important to you, then the electric model is more appealing. Its a machine of consequence. It has two modes, economy and turbo and the latter will get the thing up to a silent and gratifying 20 MPH. Battery life in turbo will take you 5 miles; itll do 8 miles in economy mode. Either way, you wont be planning any long-distance trips. Charge time from a nearly dead battery to full capacity is three hours.

Go-Peds are made in the U.S. and we think the overall quality of construction and the components used is high. But, at $916 for the gas model and $698 for the electric, their value is in the eye of the beholder. Theyll both deliver, but youd really have to be sold on the stand-up scooter design, which gives an overall feeling that theyre closer to sporty novelties than to serious point A to B transportation.

Blade Z
To see how Go-Ped compared to similar products on the market, we looked at gas and electric powered models from Blade Z, another U.S. company. Their designs are similar, with flat platforms for standing, T-shaped handlebars, disk brakes and rear-mounted power plants. We were given refurbished models for testing and this may have contributed to the difference in performance for the gas models.

The Blade Zs already-broken-in 40cc two-stroke was easier to start and ran smoother than the brand new Go-Ped engine. It was also faster, which may or may not be an advantage. Braking is good but handling at low speeds is dicey, in our estimation, with a considerable wobble if the riders movements with the handlebar arent precise. This is too unforgiving in our opinion, but speaks more of the design than of the Blade Z product specifically. The overpowered stand-up scooter is not a toy, although it straddles that line somewhat precariously, in our estimation. The electric model was a milder ride. Speeds are in the more appropriate mid-teens, not as fast as the Go-Ped, but the Blade Z will give you more ride time per charge, at 8 miles plus. Blade Zs gas model is $539.99, the electric costs $359.95. Contact www.ebladez.com/.

The folding mechanisms used for both brands are easy to operate. Go-Ped has a spring-loaded sheath that covers and secures a hinge that brings the stem flush to the ride platform. Blade Z uses a lever that controls a hinge, producing the same effect, which is the only amount of folding these scooters can do.

Weightwise, the gas models, when drained, are easier to handle. The batteries in the electric scooters account for their heft. The electric Go-Ped weighs 52 pounds. Its folded dimensions are 48 by 18 by 17 inches. The gas model weighs 38 pounds with similar dimensions.

The electric Blade Z weighs 55 pounds with similar folded dimensions as the Go-Ped while the gas model weighs 52 pounds, considerably more than its Go-Ped counterpart. Pricewise, the Blade Zs and Go-Peds claim similar MSRPs, although prices will vary dealer to dealer. Expect to pay close to $1000 and more if you want options like detachable seat posts, which are available for all four models.

Bottom of the Line
To see what we could get for a fraction of that price by browsing through the bargain basement, we bought a cheap Chinese stand-up electric scooter from the website www.rakatak.com/. For $65, we got a much smaller, less sturdy scooter with a brittle plastic platform that cracked easily.

This no-frills scooter was fully charged after six hours and topped out at a blazing 8 MPH-on the flats. Its much more portable than the larger, more powerful and more robust scooters from GoPed and Blade Z, but only in our wildest dreams would we consider it remotely as durable. Then again, its less than 10 percent of the price, so you definitely get what you pay for.

Conclusions
Are these things practical, baggage compartment transportation? Yes, up to a point. The DiBlasi is simply too big and heavy, although its fine for a hangar hack around the airport. A used bicycle might be far more effective and easy to ride, since airports are usually flat.

That leaves the Go-Ped, Blade Z and the cheap Chinese imitations. First, we dont like the gasoline models much. Something about carrying gas in the baggage compartment gives us the willies, so we say suffer the weight penalties of electric models and go with one of them.

Of the two, the Go-Ped electric strikes as the top choice, mainly because of its construction quality. The Blade Z is faster, true, but this is good and bad, in our view. Higher speed increases the chances of an injury-producing accident. In any case, if you need to go that fast, rent a car.

-Ben Barnard is an