In the cockpit, POV or action cameras have become as common—if not more so—as handheld radios. Driven by the action sports and social media markets, competition in these cameras is white hot and new models and accessories proliferate. For the purpose of this review, the choice is between the GoPro Hero 7 or Hero 8.

Yes, the Garmin VIRB Ultra 30 is still an option as are the Osmo Action and Sony FDR-X3000. And while the VIRB is better populated with aviation accessories, including filters and wireless integration with an onboard intercom, the GoPro imagery and stabilization is the one to beat, in my view. Despite some quirks, the footage these cameras are capable of is stunning.

All of these cameras have similar capabilities and performance, but there’s enough difference between them to complicate the choice. I’d like to say picking one is a no-brainer, then cite the reasons. But it’s not that simple. It depends on how you’re going to use the camera in and around the airplane and what else you’re going to do with it, such as extreme sports, diving, skiing and whatever else you think you might want to video. And, of course, if you don’t have footage of it, it didn’t happen, so that’s basically everything.

First, let’s dispense with the simplest problem. If you have an old GoPro 4 or 5 or a VIRB Elite, the GoPro 7 or 8 is a significant upgrade. The image quality, color fidelity, audio and operability are far superior, in my estimation. When GoPro introduced the 7 in the fall of 2018, it kept its homegrown GP1 chip that first appeared in the Hero 6. But this model also added a feature called HyperSmooth stabilization, giving it a performance improvement over the Hero 6, or any other POV camera, that was stunning. Before the Hero 7 appeared, the Garmin VIRB Ultra 30 crushed the GoPro 4 and 5, as we reported in the November 2016 issue of Aviation Consumer. But time and technology march on and now the Hero 7 and 8 hold the upper hand. While the VIRB’s stabilization was impressive, GoPro’s HyperSmooth is noticeably better. 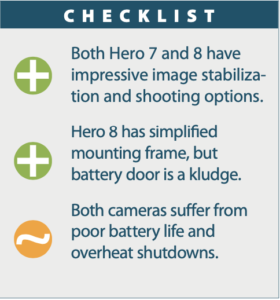 It’s not quite gimbal quality, but for a hard-mounted camera, it’s difficult to tell the difference. HyperSmooth removes the minor shakes the airframe will subject the camera to and it’s effective to make handheld shots almost shake free. It’s done in the software by sacrificing a small amount of the image area in favor of manipulating it to suppress movement. In the GoPro 7, it’s applicable to resolutions up to 2.7K and 60 frames, but not 4K.

That’s not much of a sacrifice because 2.7K is a good compromise between 1080 and 4K and takes less card space and battery capacity. I rarely use any other setting.

The Hero 8’s improved HyperSmooth 2.0 was done with the same GP1 chip, but also with software tweaking. Side by side on the same mount, the Hero 8 is marginally smoother, but certainly not night and day.

The cameras are similar mechanically, but the Hero 8 introduces a new basic frame, or more accurately, the lack of one. When GoPro introduced the Hero 5, it featured a rubberized metal case that fits into a skeleton frame with the standard GoPro mounting fingers. The Hero 8 does away with that in favor of a frameless case with two folding fingers.

Although this simplifies the accessory load, it has been met with mixed reaction in the field. The fingers appear to be somewhat tender and if the camera is whacked, the small screws can shear off, necessitating a repair trip to the factory, if you don’t lose the camera.

While the Hero 7 had two doors in the case—one for battery and SD card and a second for cable/charger access—the Hero 8 has one for everything. Again, a mixed bag. The door tends to come off when you open it, requiring a fussy reinstallation. Another complaint about the Hero 8 is that its lens is fixed, not removable, as on the Hero 7. Two issues with that: One, if it gets scratched, back to the factory it goes and second, you can insert neutral density film into

If you plan to use the camera inside the cockpit and you want to record intercom/radio audio, it gets … complicated. Both the 7 and 8 require a mic module to match audio input to the camera. For the Hero 7, this is the GoPro mic adapter ($49) that accepts a 3.5-mm jack. But the module is clunky and you need to find a place for it. The best solution I’ve found is the protective case from Artman Protective Housing ($15 on Amazon) that has a slot for the module, a case for the camera and a cold shoe mount for an external mic, if you need that. This lash-up adds weight to the camera and also almost an inch of height, which reduces mounting flexibility on a tight glareshield, for example. The mic adapter will work with the Hero 8, but the Artman case won’t because the 8 is slightly larger. Ulanzi has the G8-5 case with an optional mount for the mic adapter ($39.95 and $9.95 respectively). Again, it adds weight and size to the overall camera so it’s not a perfect solution.

In early 2020, GoPro introduced the Media Mod, an external case for the Hero 8 that incorporates onboard mics and jacks for an external mic, charging and HDMI output. The camera slides into this $80 accessory and a latch secures it so it’s smaller than the Artman and Ulanzi solutions. As of press time, the mount is on backorder, but early reviews on it have been mixed.

It does, however, have one nice feature useful for aviation: It offers a line-in setting for audio, meaning you can plug the intercom directly into the camera. I’ve had unhappy results in using audio cables designed for this purpose, plugged directly into the camera. There sometimes appear to be impedance matching issues and in one shoot, the cable picked up noise from an avionics source, producing an audible click on a one-second beat on the recorded audio. The line-in option may help with this. As soon as one is available, we’ll give it a try.

Either camera is suitable for mounting inside the airplane or on a wing, strut or fuselage mount. The HyperSmooth in both does an excellent job of eliminating airframe buzz, yielding a crisp image. Inside mounts, however, have one large wart.

Both the 7 and 8 will overheat and shut down, especially if placed on a glareshield mount in direct sunlight. In warm conditions, I’ve had both cameras shut off after about 20 minutes. After cooling for five minutes, they’ll come back for another 15 or 20. Don’t be surprised if you don’t see continuous operation.

Mounted outside the airplane, there’s sufficient airflow to prevent this from happening. Shooting 2.7K at 60 frames, either the 7 or 8 appear to run for 40 to 50 minutes before exhausting the battery. For reference, the Hero 4 and 5 will run longer, as much at 90 minutes on a full charge, but at lower resolutions. Batteries matter, too. GoPro’s latest branded battery is rated at 1220 mAh and is identifiable by a blue band along the bottom.

At $20, these are expensive batteries and for any kind of serious shooting, you need at least two or three. For $35.99, Artman from Amazon offers a three-pack battery system that includes a charger that will accept USB-C or USB micro cables. And the batteries are rated at 1480 mAh. So, more power, less money. What’s not to like, right?

Hold up. Despite the higher capacity, the Artman batteries consistently yield less endurance than the GoPro batteries. And although it doesn’t seem to affect camera function, they will sometimes throw an error code indicating incompatibility. Considering the price, they’re worth the purchase if you need extras. Just know they don’t work as well as the GoPro originals. The charger is a plus and works well, even for the GoPro branded batteries.

Because of market demands, prices on these cameras have been fluid. The Hero 7 is currently selling for $330, plus $50 for the mic adapter, if you need it. The Hero 8 is retailing for $400, plus $80 for the Media Mod if you want audio capability. It doesn’t make any sense to buy it with the older mic adapter then add the price of a case to that.

So, we’re talking about $100 price delta here between the 7 and 8 for cameras that are functionally quite similar. The Hero 7 has a marginally easier-to-use menu system, while the Hero 8 has marginally better stabilization and some additional shooting modes. It also has menu presets of which I’m not a fan.

The price/value equation is so close that my advice is if you’re buying purely on price, go with the Hero 7. If you want the latest features and don’t care about price, the 8 is the better choice. If you have an old clunker Hero 3 through 6, GoPro will give you $100 on a trade-in for a Hero 8 and that makes it the hands-down best choice.

And by the way, the trade-in doesn’t even have to work. I suspect going into early summer, we’ll see more downward movement in price for both models.