Lost to the sands of time is the quaint notion that a mechanical E6B or—gasp!—an eraser-equipped pencil were cockpit essentials. Now, it’s not just a question of having a smartphone or a tablet for aviating, but how many. Not kidding here, some owners have and use several.

But which are the best buys? Which platform is the better performer and if you’re an old hand at tablets, is an upgrade worth it? Answering this with accuracy beyond over-the-shoulder dart throwing gives new meaning to the fool’s futile errand. But that’s never stopped us before, so herewith is a glimpse at the current state of play in the app, tablet and smartphone market. No new trends seem to have emerged since last we examined this, but our survey of 947 owners and pilots revealed some nuggets. 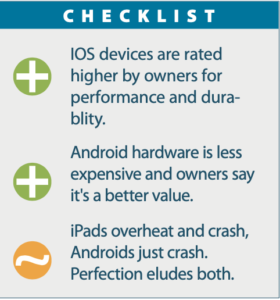 This one you probably already knew: Apple dominates the cockpit to a degree that even surprised us. According to our survey, 76 percent of pilots use an iOS device from Apple, while 16 percent use Android-powered devices. Eight percent use both and that’s often an iPhone used with a cheaper-to-buy Android tablet. For what it’s worth, in the unsheltered world beyond aviation, the market share is the opposite—67 percent for Android and 27 percent for iOS. The rest is owned by Windows tablets, which didn’t figure in our survey. There are aviation apps for these tablets, but nothing like what’s available for the market leaders.

The focus of our survey wasn’t apps, but we did ask a few questions about what owners are using. As Apple owns the platform, ForeFlight owns the app market. Some 60 percent told us they primarily use iOS-only ForeFlight for planning and navigation. As the chart at right shows, Garmin has the next biggest chunk and other providers split what’s left. Two companies—iFly GPS and Avare—the latter not really a company—dinged us for overlooking them in the survey, so we’ll examine them in a future review.

The reason for the iPad’s dominance probably has less to do with it being a superior product than with being there firstest with the mostest. Apple established its app store before Android apps were much more than a thought and ForeFlight has been in that market since 2007—13 years. Even with competition fierce, market inertia and loyalty evidently still count for something. 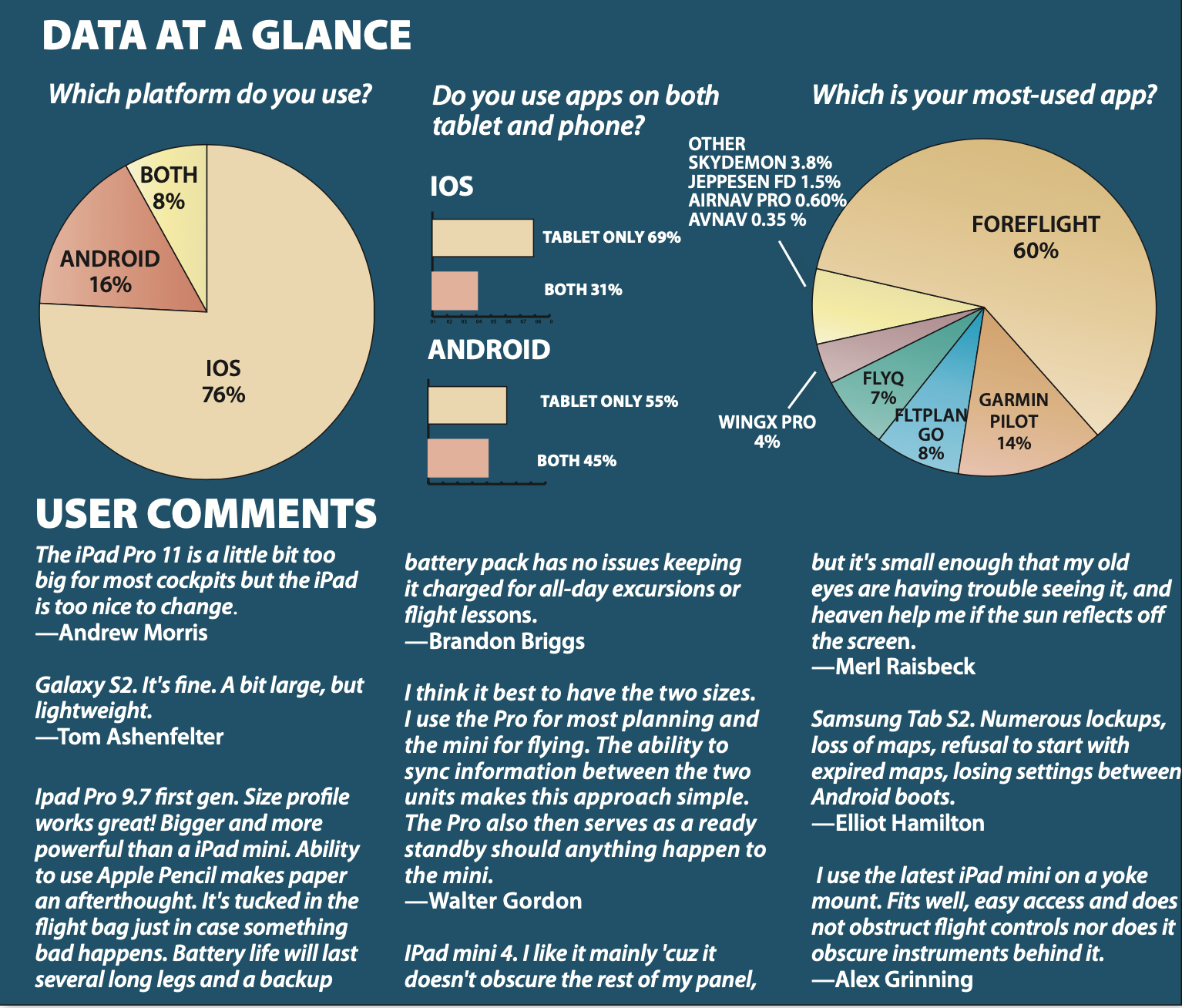 Our survey revealed that iPad and Android usage is all over the map in terms of models and vintage. Our primary focus here is iOS devices—both buying new and upgrading—so we’ll tilt in that direction. There are several determinants here in making a buying decision: What apps will you run? What else will you do with the tablet? What size can you tolerate? Tolerate is used purposefully here because users tell us too large can be just as irritating as too small. Too small relates to being able to see the display with eyes not as eagle-like as they once were. In a single comment, reader Merl Raisbeck flashed both sides of the double-bladed axe. “I have the iPad mini 4. I like it mainly ‘cuz it doesn’t obscure the rest of my panel, but it’s small enough that my old eyes are having trouble seeing it. And heaven help me if the sun reflects off the screen,” he said.

If there’s a plurality of taste, it seems to coalesce around some version of the mini as the best every-pilot’s choice. Thirty-one percent of the survey respondents use the mini and ForeFlight tells us more than 40 percent of their subscribers do. The other iPad models—Pro, Air and legacy iPad—have 10 to 13 percent each. But many users also have an iPhone and some have given up tablets entirely as just not worth the bother. “My iPhone 7 Plus is perfect in my yoke mount. Some people scoff as this, but hey, the screen’s way bigger than the Magellan portable that I was using 30 years ago,” said Mike Beckoff.

And speaking of yoke mounts, this is another buyer consideration related to the size of tablet you select, regardless of the platform. There are plenty of mount choices to plant a tablet about anywhere you want it in an airplane. That’s not the problem. The problem is keeping it there and not obscuring the instruments while still getting utilitarian  benefit out of the device. “I have a Samsung Tab A8. Before that, I had a Nexus 7. All great tablets. Works great in the cockpit using a RAM mount on the yoke with power from a USB charger. Sole source reference for IFR maps and approaches. Use the same tablet for reading and for sailing navigation apps,” said Nick Pfeiffer. A few readers had similar comments, suggesting many use their tablets for multiple activities.

A slice of the aviation iOS market belongs to Apple’s top-of-the-line, ginormous Pro series iPads. These strike us as just too large for the cockpit and although some readers confirmed this, a handful love them. “I actually think it’s best to have the two sizes,” said Walter Gordon. “I use the Pro for most planning and the mini for flying. The ability to sync information between the two units makes this approach simple. The Pro also then serves as a ready standby should anything happen to the mini.”

Related to physical size is the data storage size the tablet has. What’s best is almost impossible to answer because it depends not just on the aviation app you use, but what other apps you’ll load, especially if they’re as data intensive as aviation navigation apps tend to be. We suggest making a list of potential apps and checking the specs for required storage. If you fly regionally with ForeFlight, for instance, 32 GB is probably sufficient, while 64 GB would be a nice to have. Increasingly, Apple has made this a moot point in its maddening storage capacity pricing. Only the seventh generation of the original iPad offers a 32 GB option, then for another $100, it jumps to 128 GB. The mini’s minimum storage is 64 GB, which is plenty.

Apple also dings the buyer on the option of adding cellular to the standard Wi-Fi as a $130 upsell. Add another $20 to $40 a month for the cellular plan. Worth it? We aren’t impressed, considering most cellphones offer a Wi-Fi hotspot that will tether the tablet to the phone. We don’t see the value for aviation.

While it’s true that the cellular versions include a GPS chip while the Wi-Fi only models don’t,  you may already have a better GPS source aboard the aircraft through the avionics or a portable ADS-B In receiver. The tablet’s GPS can provide a backup, but not necessarily a very good one. We say skip the cellular option and save the bucks.

LOVE IT, HATE IT 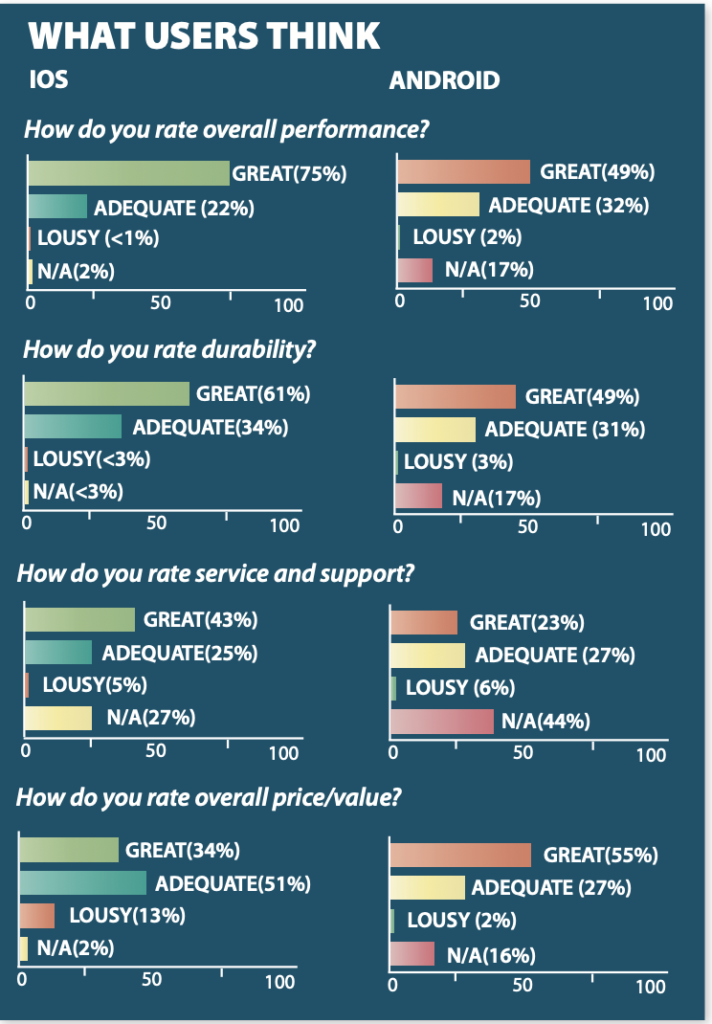 OK, so no one really hates tablets with the burning rage that, say, Washington fans hate the Dallas Cowboys. But there’s a measurable difference between iOS love and Android love. As the chart at left shows, 75 percent of iOS users say the products perform great. But not even 50 percent of Android users say the same of their tablets.

IOS users similarly give the tablets higher marks for durability and product support. Part of this may relate to how the performance is perceived and how Apple manages the apps that play on its tablets. The app store famously lords over developers and reviews apps before they’re approved for release. Although this hardly assures perfection, there are fewer apps that crash, fail to perform or are just useless.

The Google Play Store where Android apps are found is more of a digital tragedy of the commons. Buyers are on their own to discover if an app will work and users report plenty of issues. “Samsung Tab S2. Numerous lockups, loss of maps, refusal to start with expired maps, losing settings between Android boots,” reports Elliot Hamilton in a typical reaction.

But let’s not give the wrong impression here. Android devices generally perform well, they just crash and lock up a bit more than iOS tablets do. But they don’t appear to suffer that still-common problem of heat shutdowns. This has plagued iPads from day one and the fact that it probably happens less often now than it used to is because pilots have learned to work around it. “I have a sixth-gen iPad 9.7. Heat shutdowns are a problem if the tablet is in direct sunlight, as in a Bonanza yoke pivot mount,” said Frank Weissig. Veteran iPad users know never to place the tablet on the glareshield for longer than a few moments and to hide it from sunlight streaming through a window. A few minutes of cooling will bring the display back. But it’s better not to overheat it in the first place.

Some owners go to extremes to cool hot iPads. “For my Android tablet I currently use, I have never had any heat shutdowns or slowdowns, though I have occasionally had the EFB app crash and have to be restarted. For some of my older Android tablets, I have had them slow down due to heat, but never had any heat shutdowns. For my iPad, I have had a heat shutdown and purchased a fan/leg strap attachment for it, but haven’t had a chance to try it out in the aircraft yet,” said Gary Baluha. 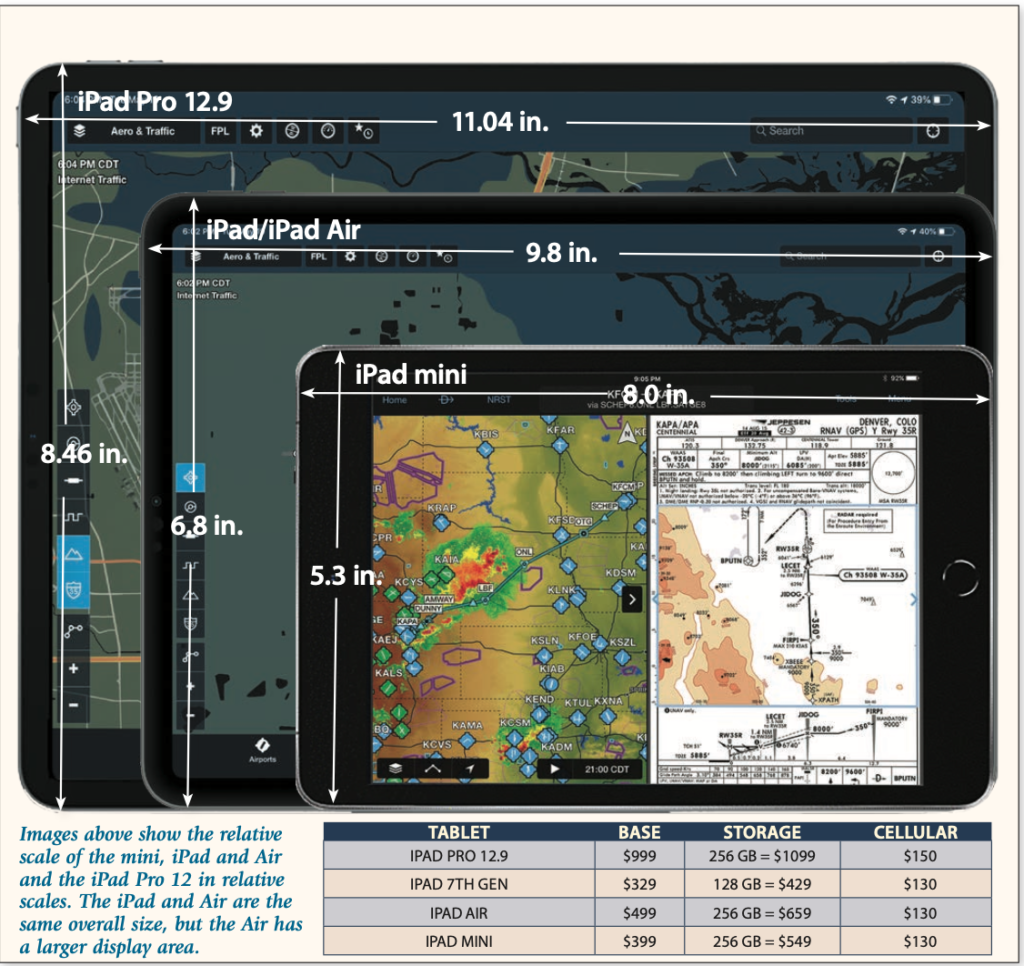 Despite the iPad’s lopsided market share, we think the Android tablets and phones are comparable performers and the tablets are less expensive and available from a broader range of providers. Overall, the Android market has more apps than Apple’s app store does, but not necessarily more mainstream aviation apps.

As for buying an iPad, the current Apple lineup is anchored at one end by the mini and the other by the iPad Pro, a niche product, in our view. It’s just too big for most cockpits.

The mini—currently in its fifth generation—is an easy first choice. It’s the most popular size for pilots in the survey because it’s big enough to see the display without blocking the panel. It can mount on the yoke or a suction cup. With 64 GB of storage, sans the cellular, it sells for $399. The next storage space step up is to 256 GB for an additional $150. That’s just not needed for aviation apps, but it might be for other purposes.

Evidently, Apple still finds sales in offering the seventh-gen original iPad. This is purely a budget buy against the newer iPad air, now into its third generation. The Air is the same size physically but has a slightly larger display and is a bit lighter. It has a marginally faster chip, but perhaps not so much that you’d notice unless the two were side by side. With 32 GB of storage—not enough—it sells for $329 or $70 less than the mini with twice the storage. The seventh-gen storage step up leaps to 128 GB for a price of $429. The Air starts at $499 with 64 GB of storage and it’s the one we would pick if the mini’s display doesn’t appeal. 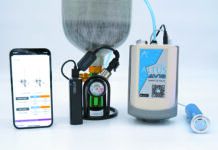 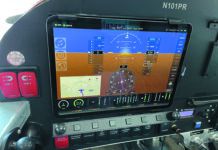 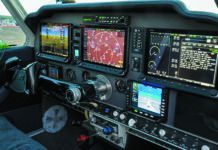