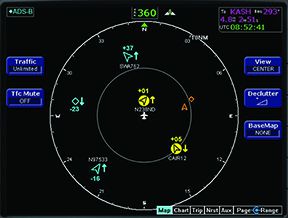 For those shopping for a traffic system upgrade, the selection has never been more complicated. Judging by the frequent calls and letters we get from confused buyers, it’s ADS-B that’s creating the confusion. The buying decision might be easier once you understand the theory behind ADS-B traffic and in particular, its limitations. You’ll also need to assess your flying mission and decide if the growing ADS-B system suits your mission better than active traffic alerting, known as TAS.

In this report, we’ll compare these different traffic technologies and offer hints on how you might qualify a buy-in right now.

ACTIVE TAS REFRESHER
Before diving into ADS-B traffic considerations, a quick review of TAS technology is in order. TAS, for Traffic Advisory System, is the old standard for which any traffic system is judged. Unlike ADS-B, TAS can work anywhere there are other transponder-equipped targets. TAS—which evolved from big-aircraft TCAS, actively interrogates other Mode A, C and S transponder systems. The traffic alerts rely completely on those responses. Much like an ATC radar interrogation, TAS systems listen for a target reply and then calculate as much of distance, relative bearing, altitude and vertical trend as possible. Part of the traffic processing function is to calculate a closure rate to the host aircraft, called the Closest Point of Approach. If the system calculates a collision course, it issues a Traffic Alert or TA, in traffic system jargon. That’s it—no ground stations, no uplink delays—it’s real time alerting from a traffic target to your aircraft. A huge benefit of TAS is that it can work on the ground, so you’ll see traffic in the local area before you take the runway for departure.

We think every buyer looking at ADS-B traffic upgrades should first get a proposal for a TAS system. By nature of design, these systems won’t always be a good match for lesser aircraft. TAS installations are big work, with heavy and large remote processors and complex antenna work. But despite the complexity, active TAS systems have come down in price, with entry-level systems from Avidyne and Garmin priced around $10,000.

On the other hand, some installations can push that number close to $20,000. That’s because the installation requires significant teardown and interfacing. They also rely on other onboard systems to step up their performance and accuracy. For instance, heading system input—either from an AHARS or HSI system—improves target-tracking performance and helps the traffic processor keep target positions in sync during major heading changes, such as a holding patterns, course reversals and maneuvering around the terminal area. This heading reference significantly lessens lag time as the system updates a threat target’s position. The truth is, smaller aircraft including some LSA models just don’t have these supporting systems or the useful load to accommodate a TAS. That’s a gap that might be filled with an ADS-B system.

ADS-B ADVANTAGE
Active traffic systems, which operate on the 1090 MHz transponder frequency, are good at nailing the distance to a potential traffic threat, but not so good on exact bearings. ADS-B is nearly perfect on both. Also, all active traffic systems increase the rate at which they interrogate other aircraft based on the threat—low for distant aircraft and fast for nearby ones. The 1090 MHz transponder frequencies are crowded, so a fast rate can actually have the unwanted affect of clogging the frequency and reducing accuracy. ADS-B was developed, in part, to reduce this frequency congestion. ADS-B traffic can operate on two frequencies—1090 MHz and 978 MHz. Aircraft that are transmitting ADS-B data on these frequencies will be picked up by listening FAA ADS-B ground stations. In return, the ground station builds a custom information packet with data on all traffic in the airspace around the transmitting aircraft, and transmits this traffic data to the ADS-B-out aircraft. This is called TIS-B, for broadcast traffic and includes non-ADS-B traffic targets. ADS-B also works air to air—as much as 100 nautical miles between ADS-B-equipped aircraft.

Since ADS-B outputs GPS WAAS position, speed and direction, an ADS-B on-screen traffic tag can offer more information than traditional TAS symbology. This includes a trend vector, indicating where the target will be in a certain amount of time, plus a unique aircraft ID that’s programmed in the transmitter aboard the ADS-B-equipped aircraft. See the sidebar on page 10 for owner comments on flying ADS-B traffic.

BEST OF BOTH WORLDS
A solution we’re following closely is the all-in-one ADS-B/TAS boxes. Garmin’s GTS800-series—available now, and Avidyne’s in-development TAS600B traffic processor, use both active interrogation and ADS-B receivers. These combined systems compute that the same target is on active TAS and ADS-B and uses the more accurate ADS-B data. This keeps a low transponder interrogation rate, reducing clutter on the frequency. Unfortunately, the GTS800 won’t display ADS-B symbology to the user. It treats all targets as traditional traffic tags, emulating TCAS symbology. Garmin says the unit will some day differentiate between ADS-B and Mode C/A targets, but not now. One thing that the higher-power GTS820 does well is see traffic at great distances. Owners boast at tracking targets 50 and more miles away. We covered the GTS800-series in the October 2009 issue of Aviation Consumer and little has changed other than substantial software upgrades that improve performance in a growing ADS-B infrastructure. For bigger aircraft with more complex missions, we think TAS/ADS-B combinations are a good solution.

ADS-B IN A BOX
As we reported in the December 2012 issue of Aviation Consumer, Garmin’s GDL88 is a remote box with mandate-compliant ADS-B out while receiving on 1090 MHzand 978 MHz frequencies. It’s also compatible with non-Garmin boxes. As we go to press, the GDL88 is in the certification process. Since the GDL88 is a permanently mounted transceiver, Garmin told us it won’t interface with portable displays. It will, however, be available with built-in, ADS-B-compliant WAAS GPS.

FreeFlight Systems TSO’d RANGR ADS-B system is another one-box solution and to date, is the only ADS-B systems that can be installed through FAA Field Approval.

For certain, ADS-B software is maturing as rapidly as the hardware. For example, Garmin’s Target Trend software ups the ante in traffic awareness and is available on the GTN-series touchscreen navigators as well as on the Garmin Pilot app. In an nutshell, Target Trend provides a velocity vector display that shows how ADS-B out-equipped aircraft are moving with relation to your aircraft, which in theory, allows faster threat assessment. Target Trend’s advantage is that it shows a length of the directional line. The longer the direction line on the map, the faster the target is moving. This certainly adds a higher level of target information compared to the TAS traffic, since you can pinpoint faster-moving traffic, which may be a critical threat.

As much value as a one-box ADS-B solution may provide, we think putting a sharp pencil on the cost of a semi-portable solutions is in order. This installation might be easier with less teardown. But remember, because no stand-alone portable ADS-B device can meet the FAA’s year 2020 ADS-B mandate—or provide a complete traffic picture— you’ll still need to install ADS-B out using a 1090ES transponder.

TIS DATALINK STILL WORKS
Often confused with ADS-B, TIS stands for Traffic Information Service. This is traffic data broadcasted from FAA ground stations directly to a TIS-compatible, Mode S transponder. The concept is similar, but not identical, to ADS-B traffic. Since the traffic data is streamed from secondary surveillance radar, dropping out of datalink coverage is a major limitations of TIS, as it is with ADS-B.

The relative location and trend of movement of Mode-A, Mode-C and Mode-S equipped airplanes within a specified service volume of terminal radars is what TIS paints, so aircraft with inoperative or transponders switched to Off won’t be visible to a TIS host system.

TIS data is generated approximately every other sweep of the radar, or every 4.7 seconds, thus traffic data is about five seconds old before it reaches the host aircraft. Using predictive algorithms, the ATC ground tracking software uses track history to present near-real-time traffic data to the host aircraft’s TIS transponder, which then displays the traffic on a screen using TCAS-like symbology.

From its inception, the FAA viewed Mode-S TIS as a short-term technology to eventually be supplanted by ADS-B, which is where we are right now. We expect TIS to work for the foreseeable future, although the FAA has already decommissioned TIS Mode-S capability at many radar sites and upgrading FAA terminal radars from older ASR-7 and -8 to ASR-11 technology, which doesn’t support the TIS ground equipment.

While we caution against buying into Mode S TIS traffic as a long-term solution, we think owners of some existing TIS transponders are well-leveraged to handle the ADS-B output mandate. That’s because models like the Garmin GTX330 and remote GTX33 can be upgraded for ADS-B output for well under $2000. The process is to send the box to Garmin for the modification.

They’ll need to be connected with an appropriate ADS-B WAAS position source—something Garmin says they are working on with their existing line of navigators. We’re confident this will be wrapped up long before the year 2020 mandate, although we’re not sure whether it will be a hardware or software fix or both.

PUTTING IT TOGETHER
There’s no way we can say which traffic technology, ADS-B or TAS, is best for every aircraft. For aircraft that fly outside of ADS-B coverage, we think TAS is the clear solution (visit the FAA’s coverage page www.faa.gov/nextgen/flashMap/index.cfm for an updated ground station map and match it against your flying missions). If you fly within ADS-B coverage, we have no problem recommending an ADS-B traffic solution, as long as you can accept coverage loss at low altitude and at times when you travel out of ground station coverage.

For certain, every aircraft that flies in controlled airspace in the year 2020 needs to have ADS-B output. This opens the door for reliable ADS-B traffic and free weather capability for every cockpit.

Looking into our crystal ball, we predict that semi-portable solutions will be the rule for lesser aircraft and tighter budgets, while a combination of TAS and ADS-B will ride along in serious, go-places aircraft. Better yet, an emerging market of single-box ADS-B solutions could drop prices even further. Still, a lot can change in seven years. We’ll be watching ADS-B closely and reporting on new products regularly.