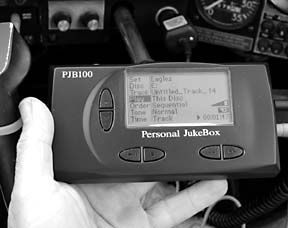 The ugly side of having an aircraft sound system is lugging around all those CDs and, worse, shuffling them around the cockpit along with charts, plates, flashlights and all the rest of the cockpit blather.

One intriguing alternative to this being hawked at Sun n Fun by Gulfcoast Avionics is a clever product called a Personal Jukebox, a high-capacity CD/MP3 storage device.

The PJ is little more than a miniature hard drive with an audio section but at 6GB, it has the astonishing ability to store the equivalent of 125 CDs or about 100 hours of music. Each CD or track can be accessed and played via a menu system, in order, by CD or randomly, by song.

To load the music, you need a USB-capable PC with a CD player that will do audio playback. (Some can, some cant.) We had only a little trouble loading a sample CD into the device. One of our computers simply wouldnt install the PJ software but another PC accepted it without a hitch. (Hey, its Windows; we dont expect much anymore. We consider it a victory if any Windows program (a) installs without trashing the operating systems or (b) requires less than four days on the phone with tech support.)

From there, a simple menu program points the way to record your personal music and it allows organizing CDs by track, music style, song title and so forth. It takes about 8 minutes to record an entire CD and well under a minute to pick off a single song. A couple of hours of loading and you can stuff 15 or so CDs into the juke box.

Playback is via a relatively simple but somewhat awkward menu system controlled by six toggle up/down keys, which allow navigating the storage tree you created when you recorded. The PJ is powered by either ships power-14 volts, through a fused accessory plug provided-or an onboard rechargeable lithium battery good for about 10 hours of playback.

How does it sound? We were impressed, frankly. Through a Koss headset included with the kit, the PJs stereo is easily comparable to our Sony portable CD and we noticed something curious: When patched into our PS Engineering intercom, the PJ sounds crisp and clean compared to the somewhat muddy quality of the Sony CD player. Evidently, the Sony and the intercom have some issues.

But compared to a portable CD player, the PJ is on the expensive side: $495 for the 6GB version and $695 for a 20GB version. These days, MP3 players are less than half that. Of course, the PJ will accept the MP3 format but MP3 players wont do CDs. Pay your money and take your choice. MP3 is increasingly looking like a perishable format; CDs arent.

The PJ comes standard with a big box of accessories, including the headset, AC power adapter, cabling, software and a carrying case. Translated from the Korean, the accompanying instructions are adequate if not exceptional.

So, yes, we like this gadget. But now comes the bad part. As we were preparing to ship our loaner back, it unceremoniously quit for no apparent reason. Gulf Coast offered to replace it, of course, but since we borrowed it, well instead await the autopsy report. Its not the first portable device weve found DOA or shortly therafter. In any case, the Personal Juke Box carries a one-year warranty.

Contact Gulf Coast Avionics at 3650 Drane Field Road, Lakeland Linder Regional Airport, Lakeland, Florida 33811. Phone 800-474-9714 or on the web at www.gulfcoastavionics.com. We found the PJ on other Web sites (www.pjbox.com) but none with a better price than Gulf Coasts, which we recommend for its customer friendly service policies.