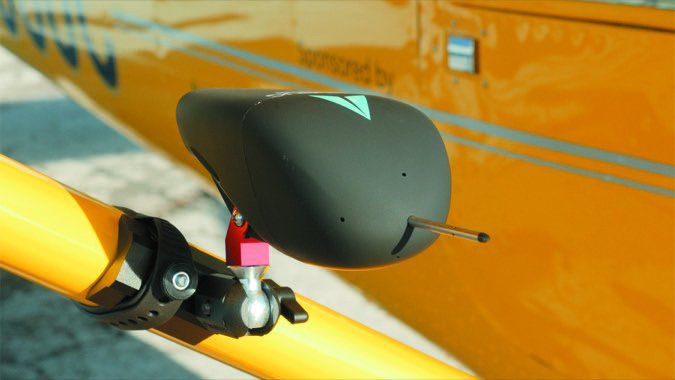 If you’ve dealt with a pitot static system failure you probably recognize the value of electronic air data computers. This tech is hardly new, of course, but portable wing-mounted pods with built-in air data sensors/computers are fairly new and a company called Straight & Level Technologies (SLT) has been selling the $950 WingBug.

The WingBug device packages ADAHRS, GPS and an ADS-B In receiver in a relatively compact chassis that easily mounts to a wing strut or nearly any surface of the aircraft with a variety of common mounting hardware. I flew with the system in a variety of aircraft and prepared this field report.

What’s In The Pod?

ADAHRS, of course, and that includes attitude data to accompany the heading and air data flight instruments. The sensors include pitot static, temperature, barometric altimeter, accelerometer, electronic gyro with magnetometer and GPS. A micro controller converts these sensors into digital data, delivered to the WingBug app for iOS tablets and smartphones over a Wi-Fi connection.

Now the standard cabin connection protocol, Wi-Fi provides a more stable connection than Bluetooth. Plus, Wi-Fi is more tolerant of electromagnetic interference (EMI)-and there’s plenty of it generated by charging systems and magnetos. But wireless connectivity is another challenge. The WingBug pod creates concurrent point-to-point Wi-Fi connections to multiple tablets or smartphones at once. But consider when multiple Wi-Fi devices like ADS-B receivers, satellite hotspots and action cameras are fighting to connect to the pilot’s tablet in a point-to-point peer connection. In a peer-to-peer connection, only a single device may be connected to a tablet or smartphone, requiring the user to manually select the device (in Wi-Fi settings). A portable Wi-Fi access point provides the fix, but the devices and applications must be able to support access-point connectivity. Not all do.

The onboard battery delivers 12 hours of use and recharges in six hours via Micro-USB, and is not user replaceable. The pod measures 7 by 3 by 2.5 inches, weighs 11.8 ounces and has a small pitot tube positioned in the center of the pod’s front case. No, it’s not heated.

Since it isn’t STC certified, the WingBug pod was designed to be completely removable from the airframe, and it’s the operator’s responsibility to keep it that way on certified aircraft. Drill through structure and the installation could require a field approval. On the other hand, for electronic pods that are permanently affixed to the airframe, the NORSEE (non-required safety enhancing equipment) guidance might be utilized. As we’ve reported, the NORSEE process addresses equipment that is not required by any federal regulation with the intent to measurably increase aircraft safety, but this still requires sizable interpretation.

The WingBug ships with a variety of GoPro-style action camera mounts. The mounts use 3M UHB mounting adhesive strips, providing a fairly secure bond, but can also be removed from the airframe with some effort. Still, we’ve had action cams come off the aircraft using these adhesives and know plenty of others with the same story. The mounting bracket allows the pod to be quickly and easily attached to the mount.

I used Flight Flix’s (www.FlightFlix.net) Rock Steady GoPro tie-down aluminum mount ($59.99) to evaluate the WingBug on a variety of aircraft. The Flight Flix mount turns any standard tie down ring into a device attachment point. This mounting system is constructed of aircraft aluminum with a low profile designed for both Garmin and GoPro action cameras. The mounts are slimmed down to a basic GoPro adapter and base. Adjust the WingBug’s position by rotating the aluminum adapter on the 1/4-20 threaded stud and locking it in place with the jamb nut. The aluminum base uses a thumb screw with a hex drive head. The aluminum centering nut allows quick attachment to any tie down ring with up to a 1-inch diameter hole. The centering nut has a grooved outer edge allowing a perfect fit on most standard aircraft, including Cessna and Piper tie down rings. I added two additional locking nuts to ensure that the screws never come loose in flight.

Use common sense and don’t mount the WingBug to any control surface or vulnerable locations on the aircraft, around loose or chipping paint, oily surfaces and surfaces susceptible to heat. A suction cup mount likely won’t be strong enough. Also, since the device is a calibrated instrument, don’t blow into the pitot tube or any of the ports.

The WingBug’s internal battery is charged in six hours using the supplied charger and Micro-USB cable. There is an On/Off switch with a red LED that flashes when the pod is charging and it turns solid red when the device is powered on. The light on the button will stop flashing once a GPS signal has been acquired.

Before the first flight, your iPad must be set to work with the WingBug hardware. The process begins with downloading and installing the free WingBug app from Apple’s App Store. The initial installation process requires the creation of an account and the registration of the WingBug hardware through the app. You’ll need a reliable internet connection for the initial setup. Tip: During the setup process, don’t power up the WingBug until prompted to do so and have the pod’s serial number handy.

Once the WingBug is mounted in the optimal location, turn it on and allow to sit for 30 seconds. This allows the device to gather its data necessary for accurate readings. Prevent wind from entering the pitot tube during this time.

I evaluated the WingBug in a Rockwell Commander 114, a Cessna 172M and a Piper Cherokee, and the Flight Flix RS tie down ring worked well on all three of these aircraft. Installation of the RS tie down ring mount took under 5 minutes. The WingBug fit well with the Flight Flix aluminum GoPro style bracket; however, I added a small amount of tank sealing tape to add a modest amount of friction. To ensure that the WingBug did not move in flight, I used a long Philips screwdriver, nut driver and 7/16-inch wrench to ensure a snug fit of the screw and nut. The Flight Flix bracket allowed the WingBug to be adjusted to be level with the wing’s airfoil.

The software currently only supports Apple iPads and smartphones. You’ll want a large screen because the six-pack application utilizes the screen’s ample real estate to display the electronic round flight instruments. The app requires that you add a pilot profile and the aircraft’s information, including the year, type, model and registration number. You’ll also set up data for the airspeed indicator and angle of attack display.

Setting the airspeed indicator requires the following information to be entered: Vs, Vno, Vne, Vmc, Vso, Vfe, Vyse and the indicator style (90, 140, 220 knots). The sideslip and angle of attack information are entered in degrees. Consult your aircraft’s pilot’s operating handbook for the correct data, although some older aircraft may not have all of the V-speeds documented. Those values may be kept at zero.

The pod is water- and shock-resistant, making it worthy for use on seaplanes. Aerodynamically, the product was designed to be used at speeds up to 260 MPH. Wind tunnel tests demonstrated 1.1 pounds of force against the device at this speed.

With the WingBug hardware charged, securely attached to the aircraft, the iPad charged, the WingBug app installed and configured for your aircraft, it’s time to fly. During my initial flights, I focused on the app and did not fly the aircraft. Sitting in the right seat, I focused on learning and using the app and found it is intuitive to use and requires very little time to master. That’s refreshing in a world where many aviation apps are layers deep. The WingBug requires the current barometric pressure setting and tapping on the airspeed indicator changes the units between MPH and knots.

With the WingBug powered on and connected over Wi-Fi, open the WingBug app, select the stored pilot and the aircraft for the flight. Then tap the Let’s Fly button, which displays the flight instruments. Worth mentioning is there was no PFD presentation in the app I evaluated, but that’s planned for a future revision, perhaps by the time you read this. There’s also a planned ADS-B Ininterface.

Tap on the altimeter to enter the barometric pressure and calibrate the altimeter to the known airport elevation. Before takeoff, tap the flight recording button (lower left-hand corner) and all of the captured data will be saved until the flight recording is turned off. In the lower right-hand corner of the screen is a Note icon. When tapped, this will open up a notes pop-up, allowing you to add notes to the flight. When recording a flight, an “event marker” button (circled in red) will appear in the flight instrument. Use this button to mark events during your recorded flight for later reference. They will be clearly marked in the flight playback section when replaying the flight. The My Flights icon displays a list of recorded flights. There’s a Play/Pause button as well as a timeline, which allows you to move the slider to a specific time in the flight.

With four years of hardware product development under their wings, the developers at SLT are focusing their energies into the WingBug application as well as the website and cloud infrastructure. We think third-party app interfaces can step the product up to another level and the company says it’s working with a number of companies to incorporate support of the WingBug into mainstream apps. The goal is to utilize the pod’s air data reference to drive other PFD displays, rather than using AHRS and GPS-derived data from a portable ADS-B receiver, for example.

SLT will offer an annual maintenance plan for the pod, which will cover internal cleaning and calibration, battery replacement and other tasks. We suspect the device will take a beating with regular use. SLT’s co-founder Alex Rolinski said that by using state-of-the-art components, the WingBug’s hardware platform will outlive the software builds. The company has a no-questions-asked one-year replacement warranty.

SLT has partnered with Flight Flix, which manufactures a CNC aluminum mounting system for action cameras. Flight Flix offers mount bases for tie down ring and wing strut attachment, as well as surface screw attachments, and has created a custom adapter for the WingBug that’s priced around $100 and will be available on the SLTwebsite.

For the price, I think the WingBug can be an invaluable tool for backing up the aircraft’s existing pitot static system and instruments. It’s also a useful tool for the training environment given its flight recording and playback. Still, as mentioned, third-party app interfaces can make the product better. Plus, an ADS-B In function can rid portable receivers from the glareshield.