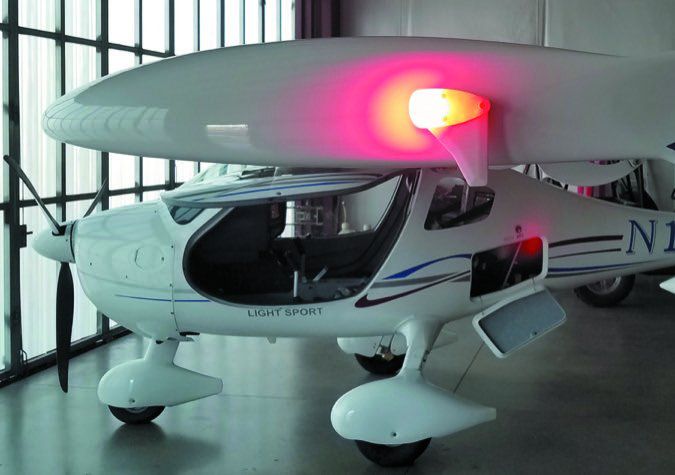 To date, even the lowest-priced mandate-compliant ADS-B Out solutions require opening the airframe for a major installation. Whether installing a remote ADS-B transmitter or a new transponder, it’s realistic to plan on nearly two days of shop time. In round numbers, that could mean a $1600 invoice—just for labor. But not with the uAvionix skyBeacon, a bolt-on, two-wire solution.

With roots in the UAS market, uAvionix brings fresh thinking, creativity and slick modern tech to the GA market still struggling with equipping for the FAA’s 2020 mandate. Is the skyBeacon—an ADS-B Out transmitter that serves double duty as a position light—the easy solution the market’s lower end has been waiting for? We ordered one for a close look.

Thinking Outside the Box

Palo Alto, California-based uAvionix Corporation has plenty of experience doing just that because outside-of-the-box thinking is what’s required in the rad world of UAS electronics. In our view, there hasn’t been much innovation when it comes to easy ADS-B retrofits for the typical GA aircraft, which has put the market in a real pickle as ADS-B equipage continues to lag.

The uAvionix team of RF, avionics, software and hardware engineers has a proven track record. For unmanned applications, uAvionix has a diverse line of forward-thinking avionics, including the Ping line of Mode S transponders, ADS-B transceivers and perhaps most important, mandate-compliant WAAS GPS engines. There’s also the echoUAT, a remote ADS-B transceiver for LSA and experimentals that’s 2020-compliant and is compatible with everything from an iPad to a Garmin GNS430 and even the current Garmin GTN navigators. Good start.

All of this tech trickles to the skyBeacon ADS-B device, a product design that’s so simple we wonder why other companies double the size haven’t acted on the concept.

That’s how uAvionix describes the device in the overview section of the current revision of its installation manual. The product is no joke. A look at the specs reveals that it’s a 2020-compliant Class B1S UAT transmitter that meets the FAA’s 14 CFR 91.227 criteria. The skyBeacon is limited to lower altitudes (below 18,000 feet) because it transmits on 978 UAT and not 1090ES that’s required in the flight levels. But in our estimation, the idea behind the skyBeacon—which also includes a red wingtip LED position light—is easy equipage for lower-end, basic aircraft that only fly at lower altitudes.

Moreover, owners of these kinds of aircraft likely wrestle with a dilemma that’s been present in the ADS-B upgrade market since day one: Their aircraft lack a mandate-approved WAAS GPS—a pricey upgrade with relatively few options. But uAvionix solves the dilemma and built a WAAS receiver into the skyBeacon, which also houses a WAAS antenna. There are two antennas, actually—the WAAS, plus an L-band pulse antenna for the UAT transmitter. That’s why the fiberglass-enclosed device is shaped like a typical transponder blade antenna.

The skyBeacon has transponder monitoring circuitry that’s smart enough to keep the aircraft’s transponder and ADS-B squawk codes and Ident status in sync without a separate ADS-B control head, something that could be required with other lower-cost UAT systems. This requires panel space and more install time. uAvionix shows a healthy list of compatible Mode A/C/S transponders, including the vintage King KT76 series, Garmin, Becker and even old Terra systems. The skyBeacon will work with most all existing Mode C altitude encoders without any additional wiring.

The internal LED position lamp (standard aviation red) has a 40-candela intensity and it’s located on the main PC board. The entire device draws a measly 3 watts of operating power. While handling the device (that really isn’t much larger than a transponder blade antenna), we wondered why uAvionix designed the housing with a see-through lens, making the PC board fully visible. uAvionix said it exposed the electronics mostly for the gee-whiz factor. Hanging out there on the wingtip, it will surely be a conversation piece on ramps, plus it shows the competition that this can be done.

The sidebar above is a brief summary of a skyBeacon installation and not all will be a direct bolt-on. There are current deal-breaking limitations. In its current form factor, the skyBeacon isn’t a bolt-on for wingtip lighting enclosed in a fairing. To work correctly, the skyBeacon’s antenna needs to hang in the same configuration as a belly-mounted transponder antenna, and many wingtip fairings won’t accommodate it.

uAvionix is already a few steps ahead of the version 1.0 skyBeacon concept. The companion product will replace the green position lighting (with LEDs) in the right wingtip and house an ADS-B In receiver, plus a Wi-Fi transmitter for delivering weather and traffic data to the cabin. It’s smart—ADS-B Out on one wingtip and ADS-B In on the other.

Given the current relationship uAvionics has with ForeFlight (it supplies the Scout portable receiver that’s only compatible with ForeFlight), we’re confident about ForeFlight tablet app compatibility, but uAvionix didn’t talk about third-party interfaces.

uAvionix said it’s nearly certain that every skyBeacon will include the LED position light (the device is currently in the certification process for Part 23) and it’s also developing a strobe lighting interface option. Shane Woodson described a strobe light interface that’s controlled on and off from a tablet app. Woodson made a good point that strobe lighting may be a common accessory on newer aircraft, but still not retrofitted to older ones. Strobes or not, there’s an efficiency benefit of any skyBeacon upgrade. “Instead of consuming 26 watts per incandescent bulb, LEDs might reduce that to 3 watts each,” Woodson reasoned. We don’t disagree. Near-limit power draw is indeed an issue with older electrical systems. LED lighting helps. Plus, given the long lifespan of LED lamp technology, you can keep them on all the time.

Since all ADS-B Out systems transmit aircraft-specific data, the skyBeacon is configured with the uAvionix skyBeacon Installer app on iOS or Android and it connects with the skyBeacon over Wi-Fi. Program the call sign, ICAO number (the app is smart enough to fetch this 24-bit number from the FAA database), emitter type or category, plus for the paranoid among us, an anonymous mode.

When the anonymous mode is enabled, the skyBeacon transmits a self-assigned call sign when the transponder is squawking 1200. Word is that aircraft transmitting anonymously won’t be eligible for ATC services.

ADS-B Compliant In An Hour of Less?

Maybe. According to uAvionix, shops that have already installed the skyBeacon report that some jobs might be completed in an hour when using the existing lighting wires. We took the device into our shop and had it lit up in minutes. This is wiring at the absolute simplest level. There’s a red wire for switched power and a black one for ground. No worries about smoking it, either. It works out of the box for 14- and 28-volt systems without additional wiring considerations.

One concern we have about using existing power and ground wiring (which in most cases is as old as the airframe it’s routed through) is shielding, or lack of, which can lead to interference and degraded performance. While this technical tidbit will likely be high on the FAA’s list of technical concerns when issuing the STC or TSO, uAvionix is no stranger to solving these kinds of issues and the skyBeacon is built with shielding issues in mind. “Our engineers come from the drone world where EMI and other considerations come into play,” said uAvionix’s Shane Woodson.

The mandate requires that ADS-B Out systems are powered all the time and on the primary bus. The current skyBeacon for experimental and LSA applications doesn’t require a pullable circuit breaker, but uAvionix isn’t sure what the final requirement might be when the device is approved for certified aircraft. The whole idea behind the concept is to use the existing power and ground lighting wiring that exists at the wingtip.

The physical installation couldn’t get easier for aircraft that have a position light with the same footprint as the skyBeacon. The kit is supplied with a mounting gasket and three button-head machine screws that are inserted through the device and thread to the existing light mount.

The image at the lower right is a screen grab from the installation configuration app and you’ll need to allow time for this step, plus a flight test to obtain a performance report.

So can a skyBeacon retrofit get your aircraft ADS-B-compliant in an hour? Based on our technical observations, we believe it can, but some jobs might take slightly longer—but not much.

The skyBeacon is already shipping for experimental and LSA installs. Since that crowd doesn’t need equipment that has a TSO (the skyBeacon does not, but it does meet the specs of the ADS-B TSO-C154c), it’s fair game at the current price of $1400.

As for the certified version, uAvionix is hoping to reap the benefits of rewritten Part 23 regs. We see the logical argument already. The typical skyBeacon retrofit is far from a major modification to the airframe, with the benefits of reducing power consumption. Why not certify by way of an approved model list supplemental type certificate, or AML-STC? That’s the plan. It’s a similar approach we saw most recently with EFIS and autopilot certification via AML-STC. We’re told the skyBeacon could have a wide-reaching AML-STC by February 2018.

In our view, uAvionix is on solid ground with hardware (including a WAAS GPS) that already meets the stringent specs of the TSO. Better yet, it manufactures and tests its own WAAS GPS engine and isn’t relying on a third-party vendor to vouch for its performance.

uAvionix has a patent pending for the skyBeacon and we think the overall concept will lead to other time-saving retrofits. It’s not often we get excited about a new product, but unlike most ADS-B solutions to date, we think the skyBeacon is the most innovative and cost-effective solution yet. We’ll be watching its certification progress closely and so should you.

Click here to watch a video overview of the SkyBeacon!