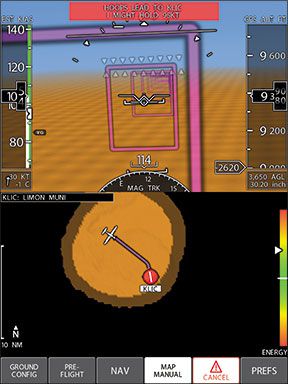 The advertising for Xavion’s emergency landing guidance, synthetic vision, navigation, instrument panel backup, ADS-B weather, weight-and-balance calculator, runway takeoff planner and personal currency record app has seemed shrill to us. The claims that it could save your life should the instruments fail or the engine quit as well as help you through a ramp check came across as over the top—so we tested it.

Bottom line—the ramp check claim is nonsense, but the rest of it is true. For $100 ($99.99), and a little practice with the app, the instrument display is good enough that you can probably rely on it to stay right side up while you get out of the clouds and the forced landing emergency feature—again, with a little practice—can significantly improve your chances of a good outcome.

We like the app. A lot of thought and work went into developing the emergency landing software.
We suspect most pilots will ignore some of the features; the highway-in-the-sky nav mode isn’t great, but the weight-and-balance calculator is handy and the runway distance and heading warning arrangement may save a life or two.

Appearance
Once loaded and launched, the screen presents, in portrait mode, a generic glass cockpit PFD and directs the user to the “orient” button to initially level the symbolic airplane in pitch and roll. Of course the “orient” button is not displayed. It’s in a submenu, so searching is required—that didn’t give us any warm fuzzies out of the box. Once the iPad is oriented vertically and the level button pressed, the PFD lines up and begins operating. As you tilt the iPad to a comfortable reading position, the unit hollers, “Attitude!” The terrain alert feature is set up to warn if the airplane is in a pitch attitude that will cause it to hit the ground within 60 seconds.

The lower half of the presentation is a constant display of how far you can glide, the appropriate route to fly to the nearest airport and whether you have the altitude to make it. If in gliding range, you see a magenta line that gives the route to fly to the end of a runway. If not, the line becomes a barber pole—danger. You can immediately look for a good place to park the airplane that is within gliding distance. It’s intuitive and simple. We like simple, especially when things are going wrong.

Setup
We were very glad a manual was available on the Xavion website. We just wish nearly as much thought had gone into it as into the app itself. It has a number of gaps (we never did figure out how it wanted us to calculate glide ratios) and reads as if roughly translated into English.

In the course of about 45 minutes with the POH, your logbook and a calculator, you input the weight-and-balance information for the airplane, its performance at different altitudes, dates of the pilot’s last flight review and IPC and power-off glide ratio, clean.

The app calculates the emergency landing glide path based on the glide ratio between best and worst—essentially the way pilots doing competition spot landings do their glides. You aren’t gliding as far as theoretically possible at best glide speed and the prop pulled back—you’re going a safe distance with a margin of error. We think it’s a smart system.

ADS-B weather loads automatically and is used for the ongoing computations for the nav, takeoff length and emergency glide features. Only a Sagetech Clarity or iLevil ADS-B receiver will share information with the Xavion app. Without ADS-B info, you input wind and barometer settings manually for each flight.

In Use
Calculating weight-and-balance takes less than a minute, and it’s easy to see if you need to move weight around to stay within balance as well as where to put it.

Xavion keeps track of each takeoff you make, including weather, paying attention to how much distance it takes to get to 50 feet. When you start a takeoff roll, it automatically considers the runway you are on and the weather and warns you if it doesn’t think the runway is long enough for takeoff based on your history. We think this could prevent a wrong runway or too-short runway takeoff accident.

In flight, the nav function uses a highway-in-the-sky, fly-through-the-boxes arrangement. We did not find it easy to use and felt it required a great deal of head-down time.

It is interesting to watch the radius of action display on the bottom half of the screen as it constantly updates to show how far you can glide and the emergency route to the nearest airport.

If you have a power loss you can’t fix and decide it’s emergency landing time, press the emergency button near the lower right corner of the display.

The highway-in-the-sky boxes appear to guide you along the route to the nearest runway. It takes a little practice to fly through the boxes, so we recommend practicing after installing the app.

We found that if we got distracted doing something else, there were times we’d look back at the display and couldn’t find the boxes. The route display helped us get pointed in the right direction and find the string of boxes again.

An “energy meter” on the lower right side of the display lets you know if you are trending high and fast or low and slow. It worked well on a day when we were dealing with 35-knot winds.

The boxes get smaller, vertically, as you approach the runway. In our review we found that the system consistently got us to a runway in a position to land, although on one, the tailwind was so strong we probably would have gone off the end had we landed. That’s a minor point—going off the end of a runway at 20 knots is far preferable to touching down on a poor landing site at 60 knots.

In cruise, we much preferred to use an app that had a moving map with an up-to-date database and leave Xavion running in the background. How long would it take to switch to Xavion and get emergency landing guidance should we need it? Each time we tried, the switchover was complete in 30 seconds. It took a moment more to hit the emergency button. The boxes popped up immediately. We think that’s plenty fast.

Conclusion
We came away thinking that if we lost the engine, at night, in the clouds and there were an airport within gliding distance, we could hit a runway using Xavion. If the vacuum pump blew or the glass cockpit went dark, we could probably fly the airplane using the Xavion PFD.

We pilots, being human, tend to worry about the wrong things. The most common cause of general aviation accidents is runway loss of control, but we resist taking dual in takeoffs and landings as if it were a disease. Mid-air collisions are near the bottom of the risk scale for accidents, however, we spend thousands on traffic avoidance systems. We are much more likely to have some sort of power loss and have to make an emergency landing than have a mid-air. A hundred bucks to greatly mitigate the higher risk event makes sense to us.