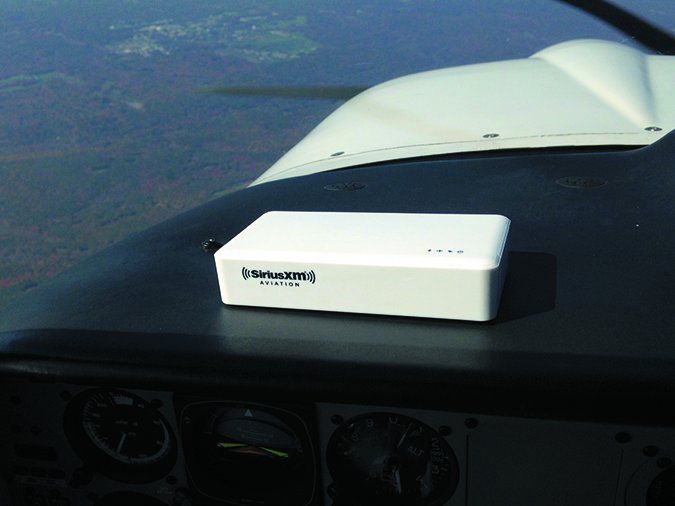 Just when we thought subscription-based SiriusXM satellite broadcast weather data was totally eclipsed by free ADS-B, a new SXM interface surfaces from ForeFlight. More interesting is that ForeFlight is the exclusive app for interfacing the Appareo Stratus portable ADS-B weather and traffic receiver.

In a market saturated with ADS-B gear, will the market tolerate another glareshield-mounted portable weather receiver and the monthly subscription that tags along? ForeFlight believes it will—partnering with SiriusXM with an interface for SXM’s SXAR-1 receiver. We’ve been flying with the setup for a few months. Here’s an overview.

That’s possibly what ForeFlight has done with this interface. SiriusXM launched its SXAR-1 aviation receiver a couple of years ago with its partnership with WSI and the Pilotbrief Optima iPad app, a not-so-popular program that supports WSI’S own weather data that’s delivered by SiriusXM. We tried the interface and were impressed with the weather graphics and overall feature set, but felt that a third-party app interface and more navigation features could make it better. ForeFlight is a logical fit, in our estimation.

At 5.0 by 2.7 by 1.2 inches, the SXAR-1 receiver is roughly the size of a fat smartphone and weighs roughly one pound. It has a nonskid base for resting on the glareshield and is powered by a USB-rechargeable battery. We’ve seen endurance as high as seven hours between charges. What that means is you generally won’t have to string a power cable over the glareshield for shorter trips. It works with iPad 2 and later tablets via Bluetooth. There are inputs for optional external GPS (ForeFlight Mobile can display GPS information from the receiver) and SXM antennas, but we never needed to use them—even when the device was stashed in a backpack. The SXAR-1 receiver will only connect to one tablet or smartphone at a time.

Controls are limited to a power button and power cable input on the side of the case, plus four status annunciators on the top of the case. These show the status of power, satellite reception and Bluetooth connectivity. ForeFlight controls the brightness of the status lights for managing battery power and preserving night vision.

That’s what you’ll need to play the SXAR-1’s received weather data, or at least part of what SiriusXM Aviation is broadcasting. The chart in the sidebar above lists compatible weather products—a new Pilot package developed for the ForeFlight app that’s priced at $39.99 per month. ForeFlight says that more weather products—and potentially an entertainment interface—are coming.

Since the SXAR-1 connects with ForeFlight via Bluetooth, and the Stratus ADS-B receiver connects with Wi-Fi, you can interface both receivers at the same time, but not weather from both. The drill is to use the SXAR-1 for weather and the Stratus for ADS-B traffic, GPS, pressure altitude data and AHRS flight instrument data. ForeFlight says you can also connect Garmin’s GTX345 Bluetooth ADS-B transponder while the SXAR-1 is connected (for ADS-B traffic display), but we didn’t try it.

As has always been the case, SiriusXM satellite broadcast offers more weather data than ADS-B FIS-B. This includes cloud tops, cloud-to-cloud/cloud-to-ground lightning data and storm tracks with greater coverage (it will work on the ground) and tighter radar display resolution outside of the 250 nautical mile range. There are some coverage differences, too.

The SXAR-1/ForeFlight satellite weather interface won’t be the only portable SXM choice. Garmin is close to releasing a new portable SiriusXM receiver of its own, which will advance the interface of its Aera 660 portable GPS navigator. It works with Garmin’s GDL39, GDL88 and GTX345 ADS-B equipment, but not with the company’s existing GXM42 receiver.

The SXAR-1 (sold through Sporty’s and SiriusXM Aviation) is $499 and SiriusXM is currently offering a $200 rebate. Contact Foreflight.com and SiriusXM.com.