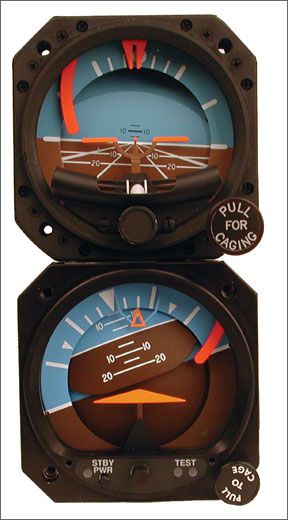 lanning to do for-real, single-pilot IFR needs to plan for the inevitable gyro failure. As too many accidents have shown, relying on your rusty partial panel skills to get you home aint gonna cut it for much more than descending through a thin overcast. For most of us flying behind air-or vacuum-powered gyros, that means at least a backup system or an electric attitude indicator (AI). For those lucky enough to have glass panels, it could mean a battery-powered AI standing by. And it needs to be in your main scan, not on the other side of the panel.

Recently, the market has become flush with choices for backup electric AIs, with a

new entry from the venerable Sigma Tek. Our last look at electric AIs, in the October 2005 Aviation Consumer, concluded that the then-new Sportys offering was the top value, if not the best gyro money can buy.

Since then, Sportys has literally run out of that product and wont be getting any more. That AIs manufacturer, Castleberry, now offers the same gyro under their label, albeit at a higher price than Sportys. In the meantime, Sigma Teks 5000EG has hit the market, joining Mid-Continents 4300 series, which we didnt examine last time.To find out how these two stack up, we gave examples of both to Dave Vorsas of Triumph Instruments in Ft. Lauderdale, Florida and let him poke and prod them to his hearts content. To no ones great surprise, we discovered you get what you pay for.

The first thing we noticed when taking the 5000EG out of the box was its close resemblance to the companys air-driven gyro. Thats no accident: While many parts of the unit are new, its basic design consists of taking an air-driven AI and converting it to electric power. In this case, that means mounting an electric rotor, along with the wiring and electronics to make it run. Our unit came with a slip/skid indicator-an inclinometer-making it a legal turn-coordinator/turn-and-bank substitute per Advisory Circular AC 91-75.

The second thing we noticed is the 5000EG incorporates a caging mechanism borrowed from higher-end AIs and designed to fit the same case. We found the 5000EGs caging mechanism to be a little notchy. While it wasnt a problem to cage the gyro first time, there was a definite over-center, non-linear feel to it. The Sigma Tek instrument also uses an off-the-shelf AN/MS-standard connector and a plate to cover the missing air/vacuum fitting.

Beyond the caging mechanism, the only other control is the knob adjusting the symbolic airplanes height for the pilots preference. That lean-and-clean look is the way we like it, although the Mid-Continent 4300 has additional front-of-the-instrument distractions-more on that in a moment. The 5000EGs horizon presentation is well-defined, with warm blue, soft medium brown and basic Day-Glo

orange colors. The instrument uses a standard “drum-and-football” arrangement as its display, which hides behind glass lacking non-glare treatment.

Applying power in a test rig, we spun up the 5000EG and banked and pitched it to the point of boredom. One thing we noticed is its power flag is really a status flag. Rather than simply telling us whether power is applied, the flag means the gyro is turning fast enough to provide reliable information. Thats a good feature and one usually called a “valid” flag. On our unit, the flag was a little sticky due, as investigation revealed, to a poor fit between the solenoids plunger and a machined block on the flags pivot arm.

One test Vorsas ran involves twirling a plastic screwdriver handle along the case corners. This is an attempt to induce jitter in the instrument, reminiscent of the inherent vibration present in most aircraft panels. The 5000EG definitely displayed some jitter, “Way too much for me,” according to Vorsas.

With one exception, the Sigma Tek appeared to employ good-quality bearings and materials throughout. That exception involved the air-powered erector vanes. Used to help the gyro find level when first starting up, the 5000EGs erector vanes arent mounted in bearings. Instead, theyre a press-to-fit arrangement around the gyro rotor, one which Vorsas says could lead to premature wear.

That said, the units rotor is “very, very nice,” according to Vorsas, who allowed as

how Edo-Aire, Sigma Teks forerunner, built a good rotor. Of course, the smoother and better the rotor, the longer the gyro will last. Since the 5000EG is derivative of Sigma Teks air-powered gyros, maybe 30 percent of its total part count is new. That means many of its parts are interchangeable with the companys non-electric AI products and should help hold down repair costs, if any, over the gyros life.

In all, the Sigma Tek 5000EG acquitted itself well. For one thing, it ran noticeably cooler on the test bench than did the Mid-Continent unit. It was slightly noisier than the 4300, however. Based on a tried-and-true design, the Sigma Tek 5000EGs major changes involve the conversion to electric power. Its a solid unit, priced less than the Mid-Continent but higher than the other gyros in this market.

While still in its box, the Mid-Continent 4300 greeted us with the traditional blue/brown/orange of a modern AI. Rather than use a more-traditional drum-based display, it sports a semi-spherical presentation, one telltale sign of a quality instrument. Other details include smaller-than-normal caging and symbolic-airplane knobs. But thats understandable, since the 4300 we received included the battery-backup option, which means some additional hardware.

In addition to being slightly heavier and deeper than the version lacking that option-a small sealed lead-acid battery is attached to the case rear-it features three small front-mounted LEDs displaying the backup batterys status, along with a push button to test it. Our example did not come with an inclinometer, which would have made its front end even busier.

The 4300 passed Vorsas jitter test with flying colors, displaying no observable nervousness at all. As with the 5000EG, it banked, climbed and dived smoothly and without hesitation. The 4300 was quieter than the Sigma Tek and transmitted little vibration to the case. Obviously, the more smoothly something turning at 17,000 RPM runs, the longer it will last, all other things being equal. However, after running about an hour on the test bench, the 4300 was noticeably warmer to the touch than the Sigma Tek.

The 4300 also had a better feel to its caging mechanism. For one, its caging knob required less travel. For another, it was slightly stiffer. Rather than a traditional miniature symbol, our 4300 came with the delta wing presentation-actually a flattened triangle-to represent the aircraft, as with many flight directors. Mid-Continent offers the 4300 in both styles.

Opening up the 4300, though, brought us to some easy conclusions. Dave Vorsas: “Its a pretty little machine; well thought-out. This is the feeling you get when you look under the hood of a Corvette.”

In fact, the 4300s innards reflect its clean-sheet design. For example, many higher-quality machined-not cast or stamped-parts comprise the 4300. Its air-erection system vanes are suspended on ball bearings, unlike the Sigma Teks, which are a press-fit. The 4300 even sports a strip of double-sided tape inside its case bottom to attract dust, behind-the-panel detritus and shavings.

Comparing the Mid-Continent product to Sigma Teks, Vorsas pronounced the 4300 a more substantial gyro. “Its well-designed from a machinists point of view. Its very nicely engineered.” All of which is important to gearheads like us and Vorsas. Two design/engineering details jumped out at us. One involved the 4300s caging mechanism. In our example, the mechanical stop was epoxied in place. Vorsas found this surprising, “since the rest of the unit is so well-built.”

The second involves the 4300s use of what are essentially consumer-grade electrolytic capacitors in its circuitry instead of the slightly heavier and much more expensive (maybe $0.20 instead of $20) components found in airline or military-spec equipment. Thats not a problem in the short-term, but can become one. Once the capacitors cans start leaking fluid-and eventually they will leak-the corrosive fluid wont be friendly to nearby components. Vorsas says his shop prophylactically replaces the capacitors on instruments they receive as a matter of policy. Notably, the Sigma Tek 5000EG sported the same capacitors.

The good news is wed be happy with either of these gyros backing up our vacuum-driven panel. That said, the Mid-Continent 4300 series is clearly the better product of the two. Its too new to have developed any kind of long-term track record, but from appearances, it should work and play well. If price is no object and for the latest in design and engineering, plus the least-expensive battery backup, get the Mid-Continent.

Other than its rather busy, non-traditional front panel and warm operating temperature, the only real drawback to the Mid-Continent 4300 is its list price of $3950 compared to the Sigma Tek 5000EG at $2850. Is that price Delta worth paying? Maybe, if you have $1100 extra in the budget and you drive a serious IFR sled such as a cabin-class twin or a newish 36-series Bonanza. But for a Cessna 182 or an older Mooney, maybe not.

That leaves a three-way choice: Sigma-Teks 5000EG, the aforementioned Castelberry AI morphed from the Sportys gyro (model 300-14EL) and the bargain R.C. Allen RCA26 now sold by Kelley Instruments. The RCA 26 has a bit of a Jekyll-and-Hyde rep. Some owners report terrific long-term performance from it, while others complain about premature failures. At under $2000 retail, its clearly the cheapest and a good pick if budget alone drives the decision. But it wouldnt be our first choice as the top value.

And heres where things get tricky. In 2005, we labeled the Castleberry (then Sportys) a “terrific performer at a bargain price.” Two years later, the price has gone up slightly and its no longer available from Sportys, but its still a great product. For $400 or so more than the R.C. Allen, we think its a no-brainer unless price is your only consideration.

As good as it and its manufacturers reputation is, the Sigma Tek 5000EGs price makes it a non-competitor, in our view. In this market, we cant make a compelling argument for the 5000EG, which costs $450 more than Castleberry. For less money, a good gyro can be had in the Castleberry. If the price were closer-say a couple of hundred bucks-it would be a toss-up.

Durability wise, well have to wait and see on the Sigma Tek. Its basic design and execution is sound, if dated. Time will tell how well it lasts, but were not aware of high failure rates among its vacuum- or air-driven siblings. In the longevity race between these two gyros, both units could well be running neck and neck. The better news here is that, for once, pilots seem to have a real choice in this market. That wasnt the case, say, 10 years ago. Considering the importance of electric AIs to instrument pilots flying hard IFR in light airplanes, thats a good thing.