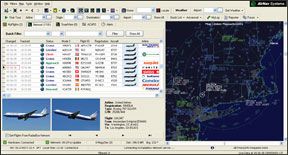 If you find the idea of looking over a controllers shoulder to watch traffic fills you with glee, weve got the product for you.

RadarBox is a two-part system. You get a receiver that picks up 1090ES and Mode S transmissions from aircraft and sends it to your computer via USB, where it feeds the RadarBox software. Data for the planes your box sees is also sent back to the

RadarBox servers, and thats where things get interesting.

The server collects data from RadarBox users worldwide and makes this data available to you. RadarBox has over 2000 users worldwide, so that can average over 900 flights visible around the globe.

Of course, you can limit the number viewed by proximity to you, airline, flight status and more. In fact, the number of options for viewing the data on top-down maps and tables of information is almost daunting.

On the map, youll see an aircraft icon and datablock similar to what a controller sees in a radar room. Colors differentiate different phases of flight. Details for the selected aircraft appear in a table complete with the registration number, aircraft type, country of origin, the great-circle route for the flight-the list goes on. RadarBox also grabs a photo not only of the correct aircraft, but, if possible, the correct livery. Other options include getting airport weather and recording the display.

Because youre depending on other RadarBox users for data, sometimes the skies look really lonely even when you know there must be planes over that part of the world. We also had trouble getting data from the RadarBox servers twice during our tests. Its almost exclusively airline traffic transmitting their data on 1090MHz, so dont expect to see the Cessna 172s in the list. This will remain true even when ADS-B is mandatory as some wont use 1090Mhz.

And all this fun comes at a whopping price. The complete RadarBox setup ships from Germany and costs 549 (about $725 as we write this). Your first year of network access is free, but after that its an additional 59.95/year. We think thats a bit pricey just to know theres a Lufthansa cargo MD-11 passing overhead right now, especially when Flight-aware gives you some of that data for free. But for a hard-core, aviation-minded radio hound, perhaps grabbing it off the air is worth the price.