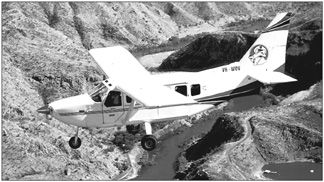 When we reported on the Gippsland Aeronautical Airvan in the November, 2002 issue of Aviation Consumer, we were impressed with the airplanes large cabin and easy access. But we had some gripes, too.

We didnt like the turning radius on the ground nor the degree of propeller erosion we observed and we were uncertain how its relatively slow cruise speed-15 to 20 knots slower than the Cessna 206/207-would pan out in the real world. It turns out that the operating experience has been positive but not without some warts.

The Airvan we flew was operated by Maya Island Airways of Belize in Central America, one of the Airvan launch customers. We were able to fly it by special arrangement. Mayas airplane had less than 100 hours on it when we flew it so we wondered whether it would hold up in the harsh environment of day-to-day operations on short, rough strips as well as its brother in the Maya fleet, the venerable workhorse Cessna 207.

In the winter of 2003, we made two trips to Belize as part of the volunteer flying we do for a charitable organization and spent some time talking with Maya Island pilots and management about the Airvan. We were surprised to find that there were no Airvans to be seen. One of the pilots explained that one Airvan had been destroyed when a tornado tossed it from its tiedown. He said the other aircraft had slid off the runway into water after a brake failure and it, too, was destroyed.

The pilot told us he thought the airplane would be better suited for someone who owned a big ranch and carried things from time to time rather than for airline work as he didnt believe it was robust enough for demanding daily flying.

Interviews with other Maya Island pilots at Belize City and other airports painted a different picture, eliciting only positive comments. They all preferred the Airvan over the Cessna 207 because its more comfortable, has better visibility over the nose in flight and passengers seem less likely to complain about it having a little airplane feel. Each believed that the Airvan was more passenger-friendly than the 207 because it was easier to get in and out of and there was more room in the cabin once youre in it.

When asked about the turn-radius issue, the pilots told us that the first airplane had been retrofitted and the second airplane came with a mod that tightened the radius to acceptable limits. It still couldnt turn as tightly as the 207, but its turning was adequate to preclude high power to turn it, something that also reduced prop erosion.

No one complained about the cruise speed of the Airvan versus the Cessna 207. We followed up with David Huber, vice president of maintenance for Maya, who had provided extensive information for our original review. Huber said that the major investor in the airline had gotten nervous after two airplanes were wrecked and insisted on canceling the order for the next two. As head of maintenance, Huber had generally good things to say about the Airvan. He said that the airplane involved in the landing incident had bent the spar when it was run off the side of a runway after the pilot landed hot and long but that the brakes had worked perfectly.

Repairs were finished and it was back on line after our interview in 2003. He expected that the cancelled orders would be reinstated because the airplanes had proved to be much more popular with passengers than the Cessna 207s. Huber also reported that he was confident that there would be a gross weight increase in the future, which would make the airplane more profitable. One minor shortcoming Huber noted was that although Gippsland had done a good job corrosion proofing the airplane-a must for any airplane operating in Central America-he felt there was room for improvement. Finally, Huber explained, theres a definite tourist season and a slack season in Belize, requiring that the airline have at least two types of airplanes. He wants to get rid of the rest of the airlines Islander twins as soon as possible relying on Cessna Caravans during the heavy season and more economical Airvan when traffic slows down.