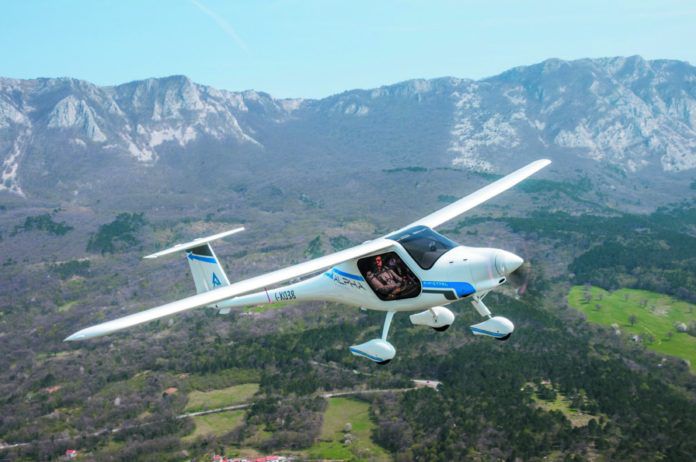 For all the blather about electric airplanes, you’d think by now there would be at least three or four to pick from and compare. But no, except for electric motorgliders, there’s only one commercially available electric airplane, Pipistrel’s Alpha Electro.

Despite the lack of a refined regulatory framework, Pipistrel is finding buyers for the Electro around the world, although not in large volume. But between Electro sales, legacy gasoline models and an aspirational urban air mobility market, Pipistrel recently opened a new factory in Gorizia, Italy, just across the border from its headquarters in Slovenia. The new facility is large and has vastly more capacity then it’s using now. When I visited in May 2019, the company was building as many as five Electros a month.

Pipistrel founder Ivo Boscarol is an electric airplane fundamentalist, but even he admits the Electro was a long shot project. It evolved from the Alpha trainer, which is itself an iteration of the Virus, a popular seller for Pipistrel. Both versions of the Alpha are entirely composite, but it uses a single-skin laminate rather than the honeycomb layup found in the Virus. That makes it easier to repair in the field.

All of Pipistrel’s aircraft spring from glider DNA and are equipped with high-aspect ratio wings that are quickly detachable. While Pipistrel said the right way to do an electric airplane is with a purpose-built airframe, the Alpha’s low weight and low drag made it suitable if not ideal for conversion to electric.

That conversion was called the WATTsUp and first appeared in 2014 as a proof of concept. I flew an early production version of the airplane on a visit to Slovenia in 2015. In the four years hence, Pipistrel has improved the aircraft with slightly higher capacity batteries, improved battery monitoring systems, different props and other minor improvements that make it feel more refined. Batteries continue to be the electric airplane’s limiting weak point and not just energy density, but in-service longevity. Pipistrel uses lithium-polymer chemistry which, although not the most energetic, provides the best combination of capacity and safety against fire risk. Allowing for the enclosures and management systems with five percent a year energy density gains, Pipistrel says it’s approaching 200 wh/kg. That makes a slight dent in flight endurance, but not yet enough to make the airplanes disruptive of gasoline-powered models. And Pipistrel doesn’t pretend otherwise, suggesting that schools serious about training buy an electric Alpha along with two gasoline models for longer training flights and cross-country work.

Pipistrel told me that the fleet leader Electro has under 300 hours, so battery service longevity remains laboratory estimates. For now, the company believes the aircraft will require two battery replacements per 2000 hours, the cost of which will be similar to overhauling a Rotax.

While the Electro I flew was improved over the version I tried in 2015, the next-generation airplane-which will be certified under CS23-will have yet better batteries that will be water cooled for both discharge and recharge. Boscarol says this may double the effective battery life and if it does, it would significantly improve operating economics, knocking as much as $5 per hour off battery replacement costs. For the time being, early operational history shows that the equivalent “fuel cost” to operate an Electro is $3 to $5 per charge, variable with local kilowatt hour charges.

Operational experience also shows that a good rule of thumb is one minute of charging for every minute of flight and that it’s neither necessary to charge the batteries fully nor desirable to deplete them below about 20 percent of full capacity. This argues for a typical training flight of about 50 minutes, landing with 15 or 20 minutes in reserve, followed by 50 minutes of charging. The water-cooled system may charge more quickly.

My impression of my first Electro flight in 2015 was somewhat colored by turbulent flight conditions that masked both the aircraft’s noise signature and smooth power delivery. It was dead calm for my flight in the newest version.

It’s a little unnerving to have so little to do before takeoff. The master switch comes on, the battery condition is checked and then you can taxi to the runway and take off without warmup or setting anything else, other than trim and flaps.

While you’re waiting for traffic, the engine is stopped. Yeah, I know. It’s a motor, but in the electric airplane biz, it’s called an engine for reasons that aren’t apparent to me. Pipistrel started out with a Siemens engine but is now using its own purpose-built 50-kW (67-HP) motor, plus its own controller hardware.

Power application is through a single lever and the onset is indistinguishable from the gasoline model and not the silent whir you might expect of an electric airplane. There’s no exhaust note, of course, but there’s still prop and slipstream noise against the windshield. In flight, it’s a different matter. On a glass-smooth morning with the power set to cruise at a typical 80 knots, the Electro is utterly vibrationless-again, no power or exhaust pulses-and quiet enough in the cabin to converse without extraordinary effort.

The base price of an Electro is $142,000, plus between $7400 and $15,800 for a ground charging station, depending on voltage and charging rate desired. All in, that makes it at least $50,000 more than the gasoline version. Because regulations haven’t caught up, using an electric airplane for training in the U.S. is a non-starter for now and with gasoline at $5 or less, the economics for the Electro are still not compelling. Pipistrel’s long-term plan is that the regs will catch up and so will the operating costs, so it will continue to trickle Electros from the new factory.

Does the world need a seven-engine TBM? Probably not, but in announcing its own electric airplane project in June, Daher is taking no chances. In a joint project with Safran and Airbus, the company will use a TBM airframe as a test bed for a hybrid electric drive. For Daher, it’s a second marriage with Airbus. Recall the two companies announced a cooperative agreement in 2014 to develop the E-FAN 2.0 and 4.0, with production aggressively planned for 2017. Never happened. As suddenly as it had entered the electric market, Airbus exited, dropping the E-FAN as a dead end. It remains involved in the E-FAN X project to develop a hybrid-electric airliner, plus designs for the aspirational urban air mobility market.

But even the E-FAN X project was roiled in June when Siemens announced that it was selling its aircraft electric motor division to Rolls-Royce. Along with Airbus, Siemens had been a partner in the E-FAN development and a major driver in electric aircraft in general. Some may be wondering if Siemens was signaling a lack of confidence.

For the TBM hybrid electric, the distributed electric power system, called EcoPulse, will be done by Safran while Airbus will provide aerodynamic expertise and batteries and Daher will presumably furnish the airframe.

EcoPulse is a developmental project sponsored by the French Civil Research Council with support from DGAC, France’s Civil Aviation Authority. Repeating the ambitious timeline it announced for the aborted E-FAN project, Airbus says the first flight of the system is planned for 2022.

As currently configured, it has six tractor electric motors-three on each wing-a combined turbine and power generator. The aircraft is intended as a proof of concept.