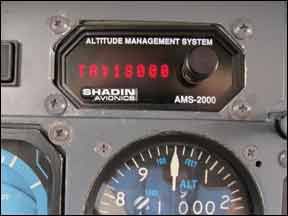 At some point, many pilots answer to ATC for blowing through an altitude restriction. Altitude busts can be costly and easy to commit—made easier by the distraction of programming complex avionics and falling behind speedy aircraft. Altitude alerting technology comes from the jet world, where climbs and descents happen at a brisk pace. While similar systems are less common in basic aircraft, PFDs and autopilot integration provide helpful altitude bugging, preselect and aural annunciation.

You can also install a dedicated altitude alert system. Here’s a look at some worthy choices, including an affordable portable option, autopilot integration and ways you might enhance altitude buffering while using your PFD.

SHADIN AMS-2000
The $2495 AMS-2000 Altitude Management System is a feature-rich alerter that dates back to the early 1990s—a long production run that owes to its proven reliability and straight-forward feature set. We like the simplicity of its single function knob, where each press intuitively scrolls through the menu structure. We didn’t need to reference the pilot’s guide when we flew with the Shadin.

The rectangular, half-inch ATI footprint is rugged and houses a bright LED display for visual alerts, while outputting adjustable audio alerts into the aircraft audio panel. We wish the unit came in a round configuration for mounting in an instrument hole. This could eliminate the space requirement and sheet metal work that’s required in many retrofits.

The Shadin displays altitude data in 100-foot increments but connecting to a high-resolution, serial altitude encoder tightens the accuracy to  10-foot tolerance and enables a real-time, instantaneous vertical speed (IVSI) function. Serial altitude data provides several enhancements, including real-time level-off warnings. These alerts are delivered 15 seconds before reaching a target altitude and are based upon the present rate of climb or descent. Serial data eliminates having to enter a baro setting into the unit. Instead, simply set the airport field elevation and the system automatically calculates the current altimeter setting.

Much of the AMS-2000 data programming is accomplished prior to takeoff. For example, entering a target altitude while on the ground arms the altitude buffering, while entering the field elevation for the destination airport programs gear-down reminders plus MDA and Decision Height alerting. Once airborne, the unit always displays the present altitude, and pressing the control knob twice within one second sets that altitude as the new target altitude.

When approaching your target altitude, the display flashes LEVEL, accompanied by an audio tone to warn that you’re 200 feet below the target. If you deviate 200 feet from this target, you’re warned with an audio tone and presented on-screen arrows indicating whether to climb or descend to get back on altitude. The Shadin seamlessly connects to most audio systems and has adjustable volume control.

ICARUS SAM
The Icarus SAM Steering Assist Module evolved from the since-discontinued Icarus AltAlert system. SAM was designed as a GPSS steering system, but has altitude alert functions and other features. The SAM-02 model doesn’t have GPSS and functions as a dedicated altitude alert system. Both versions are available in several mounting configurations. There’s a round 2.25-inch mount, a half-ATI mount and a standalone, one-inch display that’s controlled by remote knobs.

Icarus keeps the alerter function simple with intuitive voice callouts. For example, as you approach a preset altitude of 9000 feet the unit calls out “Approaching 9000 feet.” If you blow through it, it warns “Check altitude 9000 feet.” A mute switch silences all verbal alerts plus the unit can repeat the last alert, if you were snoozing.

We like that the SAM requires minimal button pushing and menu hopping to set a new altitude. Simply turn the control knob either way to change target altitude in 1000-foot or 100-foot increments. Dialing the reference baro setting along the way is just as easy—simply tap the knob and then turn it to the new setting.

For landing, the SAM offers more helpful features including landing gear check warnings that can trigger when you descend below the destination airport traffic pattern. A time of day clock—that captures the time stamp from a connected GPS—displays in the lower right of the LCD or in other configurable locations.

The SAM display can be configured to show any two of 13 GPS parameters in the upper and lower window. Some of these includes distance to waypoint, ground speed, ground track, time to waypoint, total flight plan time and bus voltage.

AIRSPORT PORTABLE
For plopping on the glareshield, AirSport Avionics makes a line of portable, battery-operated alerters. We tested the $899 IFR/VFD model and were impressed with its bright, 32-character LCD display and easy-to-use logic. The AirSport—which is available in multiple models based on display quality and operating altitude—has an integral 1090MHz receiver and antenna, which monitors the aircraft’s transponder and Mode C replies. This means the unit won’t function outside of radar coverage. It also means the unit can offer useful transponder health monitoring, warning of an inoperative system.

The display is divided into six data fields, showing current Mode C altitude, squawk code, target altitude, the difference between present and target altitude and the system’s current mode. We found the basic visual alerting prompts—LEVEL, DESCEND, CLIMB—easy to use at a glance. But the system is more than basic. It calculates density altitude, plus vertical speed, which is based on changing Mode C output. It also has an approach mode for gear, DA and MDA alerting. Audible alerts can play in headsets using the supplied adapter or from the built-in speaker.

The only nit with the AirSport is the size of the case. It weighs a bit over one pound and measures 5x5x2 inches—a sizeable presence on every glareshield we put it on, using supplied Velcro mounting pads.

AUTOPILOT AND PFD
One benefit of flying with a PFD is the ability to bug altitudes using the altitude tape display and alert function. For example, the Aspen EFD1000 retrofit PFD has an altitude alert field that sits at the top of the altitude tape. When set to a desired target altitude, the alerter illuminates a yellow flag adjacent to the target altitude in the tape, the altitude field illuminates and the PFD outputs an aural tone—depending on rate of climb or descent—at 15 seconds or 200 feet before the target altitude. If the aircraft deviates more than 200 feet from the bugged altitude, another tone and visual alert is generated. The Aspen PFD can be used for presetting a minimum altitude in a dedicated field below the glideslope indicator The minimums feature provides visual annunciation using a series of triangular markers on the altitude tape that change color when approaching the set minimum altitude. Garmin’s G500, G600 and G1000 PFD systems offer similar altitude bugging functions. Aspen is working on a future interface where the PFD will command the S-TEC 55X and Avidyne DFC90 autopilot for altitude preselect. The APS4A altitude capturer, from Avionik Straubing, uses the Aspen PFD’s alerter outputs to engage the altitude hold mode on a variety of autopilots. Garmin offers altitude capturing in the G500 and G600, commanding the S-TEC 55X autopilot to transition from vertical speed to altitude hold, based on a preset altitude.

Speaking of autopilots, we’re fond of the S-Tec SA-500 altitude preselector and alerter. Its easy-to-use control head references an encoding altimeter to command the 55X autopilot. It provides preselected level-off with voice callouts on the way to your altitude. This system is much improved over the lesser ST-360—a selector that, in our view, is user-hostile.

PUTTING IT ALL TOGETHER
We think the AirSport portable would be better if it was smaller. It’s a good option for renters, however, and it performed well for us.

For panel-mounting, we favor the Icarus SAM for its GPSS capability and convenient mounting. If money is no object, we recommend the S-TEC SA-200 for driving a 55X autopilot. We’re impressed with its voice prompting and accurate command of the autopilot’s pitch axis.

If you have a PFD, we think you can skip a standalone alerter. Most retrofit and OEM systems can keep you from busting altitudes with standard features.