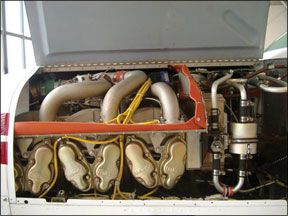 nza owners like to go fast. But, then doesnt everyone? For years, Beechcrafts venerable singles were the thoroughbreds of the single-engine non-turbo herd, cruising past 210s, Mooneys and everything in the Piper fleet short of a

Malibu. The age of white plastic airplanes Cirrus and Columbia ended that, leaving Beech owners in their propwash with 180-knot cruise speeds. It was inevitable that someone would respond by hotrodding the Beech 33 and 35 series with Continentals well regarded IO-550.

Atlantic Aero has been doing just that for about three years and has achieved good market acceptance of its 550 conversions for Bonanzas and Cessna 210s.

With six engineers and about 180 employees, Atlantic Aero is a large operation as STC houses go, and it delivers conversions for pistons, jets and turboprops, covering some 20 STCs. John Ackerman, Atlantic Aeros VP of sales and technical services, told us that the IO-550 conversion came from the same place most conversions do: from airplane enthusiasts who want something better and see a way to make money providing it. In the 1980s, company president Don Godwin

spurred the development of a homebuilt kit aircraft, the Questair Venture, which proved blisteringly fast.

A Teledyne Continental Engineer, Bobby Miniss, helped blueprint the best of all the Continental components into what became the TCM IO-550-G. This induction-tuned powerplant would energize the little homebuilt to airspeeds of 250-plus knots. A few kits were produced and sold and they were fast, but the design withered for lack of demand. The prototype still flies and resides in a hangar near the Atlantic Aero offices.

The engine in the Questair had performed beautifully and without any untoward maintenance concerns. Atlantic Aero was convinced there was a general aviation STC application for it, so in 2000, they embarked on a program to STC the engine into the Cessna 210. A year later, they began thinking about expanding the idea into the plentiful Bonanza fleet. Could the same conversion bring the normally aspirated Bonanza up to the 21st century airspeeds that others were now setting as the standard?

When I first saw the prototype Bonanza conversion in the spring of 2003, it was hardly a thing of beauty. Atlantic Aero had acquired a 1976 vintage A36 in nearly original condition. The airframe was sitting in the corner of a back hangar naked

from the firewall forward. A new Continental engine was sitting in the engine mounts with induction tubing atop the engine, curving to the six cylinders. There was a cone shaped air filter on top of the engine that was fronted by a new carbon fiber nose cowl.

The benefits of the upper deck system are cooler induction air and a ram-air effect similar to that on the early Mooney models. Air enters through the smaller engineered inlets and is directed for both cooling and induction.

In a manner similar to the Mooney changes devised by the late Roy LoPresti, the wide Bonanza cooling inlets were reduced drastically. This ram air effect gives

about a one- inch increase in manifold pressure. The lower intake grill on the stock cowl disappears on the new Atlantic Aero cowl and only the landing light graces the smooth lower cowl.

The new cowl is fabricated of carbon fiber and manufactured in-house by Atlantic Aero. The entire nose and upper cowl doors are replaced. The wide opening cowl doors provide the easiest and most liberal preflight viewing in the class. The same latch-style hardware opens each cowl door. The cowl pieces are well fabricated and fit to close tolerances.

Ackerman explained that from the beginning of the project, the concept was increased speed and a cool running engine. Reliability feedback from Cessna 210 customers was excellent and the engines 310-HP rating was for continuous operation. Atlantic Aero consulted with Hartzell to match the optimal propeller to this engine. Hartzell had recently devised their Super Scimitar model and suggested

that this three-blade prop at a slightly larger diameter would be a good match.

In October of 2003, I saw the completed conversion and got an invitation to ride across the country for first-hand impressions. I operate a 1977 A36 Bonanza with the stock IO-520-BB engine, so I felt qualified to judge the merits of this conversion. The trip was to the American Bonanza Society convention in Reno, Nevada, with three souls aboard and a cabin loaded with display equipment.

My first impression was the difference in idle and vibration. One of the unique attributes of the stock IO-520 and -550 engines in most Bonanzas is that Harley-Davidson-like chugga-lug idle. Many engine-o-philes find that lopping tone music to the ears, but this engine idled more smoothly. We departed Louisville that afternoon with temperatures in the 80s and near gross weight. Climbing at 1000 FPM, we leveled at 6000 feet and were crossing Kansas at ground speeds of 180 knots. The engine was smooth running at 2500 RPM.

During that flight, we took the southern route over the Rockies, climbing to 12,500 feet for our highest cruise altitude. But you could tell that the engine could go higher, if asked. Later test data proved this to be true. We tried rich- and lean-of-peak settings on that trip and found the engine happy with either. The tuning of the inlet air seemed to work well, allowing lean-of-peak operation as the engine comes from the factory.

Moving ahead three years to the present, Atlantic Aero has now converted about 25 Bonanzas. Conversions have gone into the V-tail, the A36 and the F33. Today, the first conversion aircraft has over 900 hours on the engine. I asked Jerry Hughes, VP of service marketing at Atlantic Aero, about any maintenance issues. He says there have been none to speak of and showed me the engine compressions on the recent annual of the test airplane, which were all well into the 60s and 70s.

We flight tested the most recent IO-550 conversion last fall in light winds and smooth air. We had oxygen on board in preparation for testing at higher altitudes. In addition to a full Garmin panel, an EDM 800 engine analyzer gave EGT, CHT and OAT information. The GPS has OAT information incorporated, enabling quick TAS calculations. Nonetheless, we flew one triangular course for a TAS calculation the old-fashioned way, just to verify our GPS TAS readings. We were topped off with fuel and with two on board were about 400 pounds under gross.

Initial climbout was at 1300 FPM at an indicated airspeed of 110 knots. The cowl flaps were closed. Ackerman wanted to demonstrate how cool the engine runs with the modified cowl and baffles. The highest CHT was 371 degrees F. Level at 3000 feet, full throttle yielded 184 knots TAS. We then climbed at 1000 FPM to 6500 feet. During climb, the highest CHT was 361 degrees F, the lowest 349 degrees F. At 6500 feet, we noted 190 knots TAS, at 23 inches and 2720 RPM and at 70 degrees rich of peak on the leanest cylinder.

Because of its high horsepower output, the IO-550 is often touted as an engine that doesnt need turbocharging. To test the claim, we continued the climb at 500 FPM to 17,500 feet. CHTs remained cool, but Ackerman opened the cowl flaps because the oil temperature was gradually rising toward 200 degrees F. Level at 17,500 feet with OAT of 23 degrees F, we recorded an IAS of 125 knots at 15 inches and 2500 RPM. This gave us a TAS of 169 knots on 12.6 GPH. Although we didnt demonstrate it on this flight, Ackerman later showed me data from a previous flight to that same altitude that yielded 166 knots airspeed on 10.2 GPH with full throttle/2500 RPM, but leaned to 50 degrees lean of peak, which the IO-550 will do without complaint.

For the installed price of $76,358 (December 2006 pricing), you get a factory remanufactured engine, a new Hartzell propeller, redesigned heater duct, new mixture and throttle cables, new induction system and filters, all new baffles of Atlantic Aero design, new motor mount rubbers, new fuel and oil lines, a new gear warning switch and a new four-piece carbon fiber cowl. In short, its a lot of stuff. That price allows a core value for your old engine.

You can fly the airplane into Atlantic Aeros Greensboro, North Carolina facility or have the conversion done elsewhere. For those wishing to have the kit installed by their local maintenance talent which about half the kits are the price for the kit alone is $65,518. Customers who have chosen to have the conversion done at their home base say Atlantic Aero seems to be helpful and supportive to those doing the field application, but its a major job. Flying to Greensboro, in our view, is the most desirable way to have this conversion done. Ackerman, by the way, notes that the conversion doesnt affect the airplanes payload, but it does move the CG slightly forward, which helps the aft-tending CG problems in some Bonanzas.

Conclusion? Owners report and we have seen that the conversion is smooth and strong. Its also quite economical, something that cant necessarily be said of other large displacement engines. Generally, the airspeed increases seem to be in the 12 to 20-knot range, depending on the airframe. The ability of this normally aspirated engine to take the Bonanza to the high teens for cruise may induce some owners to buy an oxygen system and its probably worth having it.

With cruise speeds still near 170 knots at 17,000 feet, owners can choose to fly over, rather than through or around summertime buildups. For those who wish to fly on the lean side of peak, the engine is happy there. Conservative fuel consumption and increased range are the benefits, not to mention cleaner running.

There seem to be few maintenance concerns voiced by owners thus far and most seem happy with the return on investment. Atlantic Aero tells us it isnt aware of any resales of Bonanzas with the modification. They say resale of the Cessna 210 modified aircraft have yielded a premium over stock models, but we havent seen the conversion yet that returns the original investment and we doubt this one will either. But thats not exactly the point. The IO-550 conversion is meant to allow old Bos (and 210s) to run with the big dogs and at that, it definitely succeeds.

Charles Davidson has been a pilot since 1977 and an AME since 1978. Hes active in the American Bonanza Society and lives in Kill Devil Hills, North Carolina.