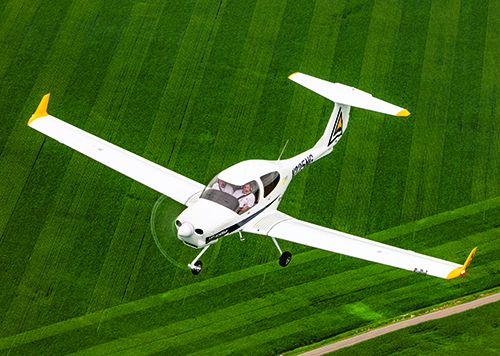 When aerodiesels first appeared nearly two decades ago, their maintenance requirements were eye watering. Gearboxes had to be inspected, pumps and alternators replaced, clutches attended to. Austro (and Diamond) learned from the experience and have reduced  scheduled maintenance  to a minimum.

Diamond’s sales pitch to would- be buyers distills this down to overall operating costs between the Lycoming and the Austro models. Allowing for all the required maintenance, the higher price of avgas and the Lycoming’s higher fuel burn, Diamond says direct costs for the IO-360 are about $80 versus about $55 for the Austro-powered NG. That number includes the Austro’s ongoing maintenance.

Given the $34,000 price Delta between the two models, the operating costs washes that at about 1360 hours, variable with local fuel prices. Still, at a high-tempo flight school, do those maintenance requirements slow the pace?

To find out, we contacted Lift Academy in Indianapolis, which operates DA40 NGs exclusively. Lift is the creation of Republic Airlines, which decided about 18 months ago that it would address the pilot hiring shortage through its own ab initio training facility. It has about 300 students and 33 NGs, plus some  DA42 NGs for multi-engine training.

Lift may be exceptional because it gets a favorable price on fuel because of its association with the airline. But maintenance director Jim Boothe told us the airplanes have lived up to Diamond’s claims.

“I’ve been quite impressed. It’s all electronically controlled so we do have some sensor issues. But overall, as far the reliability, it’s been really good,” Boothe told us. Diamond tells operators that to maintain the engines, they’ll need to be comfortable with laptops to plug into the engine’s onboard diagnostic port. Boothe says this has proven to be a plus.

“It’s very helpful. It’s fairly user friendly. What we are struggling with because it’s new is understanding what’s good and what’s bad. Every day we learn something new,” Boothe says. Lift is coming up on its first overhaul cycle for the NGs and will exchange the engines. The vibration damper inspections require about a half day for two technicians and Boothe says about four in 10 require replacement.

When we spoke to Boothe in late December, Lift was expecting delivery on two more new NGs.