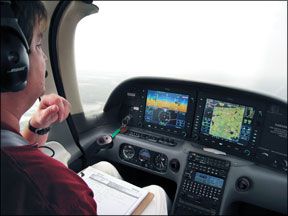 If you had to pick one company that broke the floodgates on glass cockpits for GA, it would be Avidyne. When Cirrus chose the Avidyne Entegra system for the SR-series aircraft, they became an industry leader. Piper also offered the Entegra system, and there are now over 4000 Entregra systems flying.

But the Entegra was partly just a pretty face-that is, the GPS/nav/comm functions were actually done by Garmin avionics. When Garmin released its integrated G1000 system, the Entegra looked a bit dated in comparison. Columbia Aircraft offered a choice of systems to new buyers, and every single one chose the G1000.

While Garmins G1000 evolved and L-3 Communications introduced its excellent SmartDeck, Avidyne was working away on the next generation of its flight deck system. The bulk of the system will be available this spring as Entegra Release Nine. Looking at both its user interface and capabilities, Avidyne is poised to retake the championship belt in glass cockpits for light aircraft.

The new system has three components that the pilot can see: the PFD, MFD and Flight Deck Controller (FDC). The old Entegra PFD and MFD looked the same at a glance, but were actually completely different, non-interchangeable units. Release Nine uses identical boxes for both PFD and MFD. This means that the MFD can revert into a PFD in the unlikely event the PFD fails, but also means there are two air data and digital gyro systems (ADAHRS). Release Nine is a true dual-ADAHRS system, constantly comparing the data and therefore more failure tolerant.

The bezel around these displays is new and quite clever. Across the bottom are five rocker buttons for quick access to what Avidyne calls pages for flight management and systems control. These five pages are equivalent to the groups you may be familiar with on Garmin avionics. Push the rocker button once and you jump to the last tab you used in that page (the last page in a group in Garmin-

speak). The rocker key illuminates green so you know which page and set of tabs (different screens) youre viewing. Now push the rocker left or right to scroll as needed through the different tabs (screens) for that page.

Sound confusing? It is for about five minutes. During those five minutes, though, our first guess on which button to push was usually correct-a strong indicator of good user interface (UI). Once our fingers learned what to push, we found this to be the fastest way weve seen to navigate a bunch of data quickly.

And its a lot of data with serious information density. Unlike the previous Entegra system, where radio frequencies or flight plan management were all done from a separate box, the new PFD and MFD can do everything and have to show all those options. In our opinion, Avidyne hit the sweet spot of using just enough color and highlight to visually organize the information while keeping the contrast high enough and the type large enough so its easy to read. This is especially evident in the flight plan layout.

In addition to the rocker buttons across the bottom of the bezel, there are softkeys along both sides of the bezel to customize what youre viewing. So if you were viewing a checklist page, one bezel key might be for marking an item done and another might be for resetting the checklist.

These bezel keys are also rocker switches. If the only options are on/off, then both sides of the rocker do the same thing. If the bezel cycles through items-like different views of your approach charts-then you can move forward or backward

at will through the options.

The FDC with its QWERTY keyboard is the other obvious change, but the fact that it sits where radios used to be reveals another core improvement. Release Nine uses a dual-channel databus and digital radio architecture that it inherits from Avidynes work on the Eclipse 500 jet. The radio quality is excellent and fully integrated into the system. While you may never use a VOR again with dual GPS, the system automatically tunes the underlying VORs along your route of flight just in case. The digital radios let you monitor the standby frequency for either (or both) of your com radios.

After years of texting on our Blackberries, we found the QWERTY keyboard layout faster and easier than the ABC layout more common in aviation. Catering to both simple and power-user use, you can dial up items such as altitude or heading with a knob, or punch them in with the keyboard. The monochrome screen on the FDC seems almost a throwback with such good use of color elsewhere, but it gets the job done and is easy to read.

The map, checklist and systems pages will look familiar to previous Entegra users. So will the autopilot annunciations and basic controls. Being able to keyboard in a destination is welcome improvement and the system will guess your intensions as you type, so you rarely have to enter it all. Airways, holds and approaches can all be entered in the flight plan. Vertical navigation is entered here, too.

A cool feature is the frequency list button on the FDC, which pops up a list of the most likely frequencies youll need in the order you need them. Release Nine uses a PS Engineering PMA 8000B audio panel, but its fairly well integrated. You can see the name of the active com frequency on the PFD (when viewing the more common PFD pages) and can control music and cell phone connectivity from the FDC. Like the previous Entegra, datablocks are fully user-customizable, including the default data on the FDC.

The new vectors function confused us at first as it looked like a glorified heading bug. It actually is that, in a way, but what it adds is projecting your track over the ground on the current heading given the winds and painting that on the moving map, complete with the intercept to a final approach course. After using vectors for a while, we admit its a handy feature.

Vectors mode is integrated with a PFD button offering the next logical sequence on an approach, such as arming or disarming the intercept from vectors mode as well

as activating an approach or initiating a missed approach.

We were also thrilled by the ability of the lower PFD to display engine instruments, maps, checklists and more. This kind of flexibility is fantastic when youre in the middle of a task on one display but need to see something else quickly. We did find some nits, such as limits in how we could layer weather or access data on the map pages. One of the most useful tabs on the FMS page was called “Map/FPL.” We kept going (incorrectly) to the Map page to find it. But none were showstoppers

We were surprised to see a blue-over-orange PFD horizon instead of a synthetic vision display with highway-in-the-sky (HITS) guidance. Both of these features will come with a software upgrade slated as Release 10, due in late 2009. Release Nine hardware is required for this upgrade, and it should be a relatively inexpensive upgrade for Release Nine customers.

Two other notable absences are a new ADAHRS system and an integrated autopilot. While Release Nine has two ADAHRS, its the same system in earlier Entegra models. This ADAHRS had some growing pains early on and is still slower to erect than newer systems. It cant restart in the air if shut down for more than about 30 seconds.

We asked Avidyne about the autopilot and the ADAHRS. There was no public

comment on the ADAHRS, but Tom Harper, Avidynes Director of Corporate Marketing, said of the autopilot, “We have a division in Boulder called Guidance and Control. Theyre very busy.” Since the first target market is upgrades for Avidyne-equipped Cirrus aircraft and the performance of the S-Tec 55X in those planes is a bit of a sore point, were not surprised. Avidyne President Dan Schwinn added, “We want to make sure there are a range of upgrade options for every area that has room to upgrade.”

This comment leads us to believe there may be not only an autopilot in the works, but, perhaps, a simplified Release Nine variant with a lower price tag.

That price tag is daunting. Release Nine is $70,000 in equipment alone. Budgeting 100-150 hours for installation and incidental work, Release Nine would be a $100K upgrade.

That might be within reason for a late-model Cirrus G2 that isnt upgraded to WAAS just yet or an Avidyne-equipped Piper Meridian. More than 1000 customers coughed up $15,000 to upgrade their older Avidyne systems to WAAS, but there is a tangible gain there as the FAA certifies more LPV approaches. The bottom line is that although Release Nine is a great system, it doesnt provide much more mission

capability than its predecessor. “We paid attention to the TAA studies,” Harper told us. “Improving the FMS is best bang for the buck in single-pilot safety.”

That may be true, but we see the intangible of increased safety for single-pilot IFR as a tough sell-at least at those prices. Also, we dont consider the system truly complete without synthetic vision, HITS, and, maybe, a digital autopilot, so buying in now is really getting 90 percent of the product with an upgrade down the road.

When the system appears in the OEM market, however, it will be well worth considering. Its scalable to 12- and 15-inch screens and can be certified to a higher level than the older Entegra. An infrared camera system is in the works. Wed be surprised if there wasnt a next-generation ADAHRS by then as well. But wed also bet no OEM would launch Release Nine until it had turned into the complete Release 10.

But thats slated for the end of the year. While its impossible to know what the competition will have even 12 months from now, this system should put Avidyne back on the cutting edge.