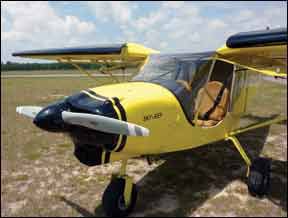 If the world of manufacturing offered such a thing, it would have to issue a special award to the light sport aircraft industry for sheer, blind tenacity in the face of hopeless market conditions. Dozens of companies persist in peddling so-so designs with no chance of achieving enough volume to survive, much less prosper. The smarter companies are figuring this out and are re-jiggering their business plans

into hybrids whose sales rely not just on flightschools and owner operators, but other business lines entirely.

An intriguing example of this is tiny Eastman Aviation, headquartered at Georgias Heart of Georgia Airport, south of Atlanta. The company is plying the usual sales leads among private owners and flightschools, but its also doing something unique: Its pitching its products to law enforcement and government agencies as a cheap replacement for expensive helicopters and its even exploring ways to convert them into unmanned aerial vehicles, a white-hot market segment with few inexpensive options. Diamond has done the same with its DA42 MPP twin, converting the airplane into a multi-sensor surveillance platform that can be manned or unmanned. Theres little doubt that demand exists for such products. Eastmans challenge will be to break into a field dominated by products many small agencies cant afford.

When, in 2004, we first visited the spacious hangar where Eastman now lives, it was home to another company: Aircraft Manufacturing and Development, a company that was building the CH2000 Alarus, a light, two-place trainer meant to compete with the likes of the Diamond DA20. Although that model achieved moderate success, the trainer market is thin and fickle and AMD failed to sustain. After an ownership change, the company morphed into a second AMD-Aircraft Manufacturing and Design, and moved into the LSA market, tooling up to build the CH601 LSA, a design that originated with the prolific Chris Heinz of Zenith Aircraft. Zenith was also responsible for the Alarus design and the original AMD

manufactured it under a subsidiary arrangement with Zenith.

While ramping up in the LSA market, the second iteration of AMD was bought by George Bryce, Jr., a Florida-based aircraft dealer and investor, who reformed it into Eastman Aviation. The companys product line now consists of two aircraft, the low-wing CH650 and the high-wing, STOL-capable CH750. These two aircraft were also designed by Zenith and all the parts and pieces are provided by two Zenith sister companies, the Canada-based Zenair and Zenith Aircraft of Mexico, Missouri, both of which are actively involved in the kit industry and offer both of these models as kit aircraft.

But only Eastman makes the ready-to-fly SLSA CH650 and 750. Eastman is set up a little like a mini-Boeing, buying airframe subassemblies from Zenith and obtaining engines, avionics and other hardware to merge into the ready-to-fly whole. The subassemblies-wings, fuselages and controls-arrive complete. Eastman assembles the aircraft, paints them and installs avionics and systems.

Between the AMD and Eastman iteration of this manufacturing effort, about 60 of the low-wing versions have been delivered another four of the high-wing 750 have been built. Both of these airplanes owe their genesis to Zenith kit designs. The 650 started life as the CH601, which was both a kit and later an LSA. With the addition of a larger bubble canopy and other minor changes, it became the CH650.

Likewise, a variant of the CH750 appears in the Zenith product line as the STOL

CH750 and like the kit version, the LSA version has been constantly improved since its progenitor appeared as the STOL CH 701 some 20 years ago.

Zenith is somewhat unique in the kit world for producing so many designs aimed at different market interests and so it is with the CH650 and 750. Eastmans Frank Woodward told us the 650 is pitched as a go-places cruiser for owners who want a practical, sport flyer with respectable speed. As far as Eastman is concerned, it can be equipped to be flown under IFR.

The CH750, on the other hand, is the LSA equivalent of a utility aircraft and herein, Eastman sees an opportunity. With the ready-for-business looks that only a mother could love, the airplane shines at short field and STOL performance and it can fly nearly slow enough to compete with a helicopter. Woodward, who has a background in unmanned systems, is working on fitting it with lightweight airborne camera systems, searchlights and hailing speakers, among other ideas that law enforcement agencies would want for an aerial platform.

Eastman has been making the rounds of law enforcement and agency trade shows trying to pitch the idea of an LSA as a stand-in for an expensive, dedicated helicopter or perhaps as a supplement.

Our response to this would be “good luck,” were it not for the fact that virtually every jurisdiction with an air unit-fixed or rotary wing-is cash strapped and facing budget cuts. Some of these have simply gotten out of the air unit business entirely. Eastman believes that for at least some of these agencies, an LSA will be an attractive option and the company is getting some nibbles. Although the ASTM consensus standard doesnt allow LSAs to be used in for-hire operations, it does allow government agencies to deploy them in the utility role. Further, in such public use, the aircrafts gross weight can be increased to 1440 pounds, 120 pounds higher than the civil LSA limit. Eastmans Woodward believes thats more than enough additional payload to accommodate modest sensor packages.

For owner-flown use, the CH750 would be a good choice for owners interested in backcountry or utility flying or who just want something different-really different.

Although the Rotax line seems to dominate the LSA segment, both CHs are equipped with the Continental O-200 swinging fixed-pitch, two-blade propellers from Sensenich. Woodward told us this choice does cost a significant difference in payload, given that the Rotax is a much lighter engine. But he also said they are

pitching to a market that prefers a conventional aircraft engine and Eastman is dedicated to the idea that these LSAs will be built in North America, at least as much as possible. Even with the heavier engine, the CH750 has typical LSA empty weights of between 830 and 850 pounds for a typical useful load of 460 to 480 pounds.

It carries 24 gallons of fuel (22 gallons useful), so with tanks full, theres payload for one FAA 170-pounder and another light person, but no baggage. (If you wonder why people fly LSAs a little over gross, thats why.)

These two airplanes are so dissimilar that comparing them is pointless, so we wont. Well look at the CH750 in this article and the CH650 in another report. If theres one word to describe the CH750, its pragmatic. Pretty it aint. It has a fat wing with a large, full-span fixed leading edge slot that kicks in at high angles of attack, keeping the airflow attached and allowing the airplane to fly controllably at slow airspeeds. Another curious aspect of this design is a reverse camber horizontal stabilizer, which also contributes to slow speed controllability at high AOA.

The cabin ergos are, well, different. The gear legs and struts are positioned far enough aft of door centerline to make ingress and egress easier than it looks. Just plant your butt in the seat and swing your legs in. Theres no stick to get in the way because…for dual controls, the CH750 has a single, center-mounted stick a Y-contraption on top to give both pilots something to grip.

At first glance, it doesnt look like it will work right, but it does. Its just as natural as a dedicated center stick and the Y provides a nice notch to rest your arm on during taxi.

How does it perform? Impressively. With an 8-knot, gusty breeze right down the runway, the CH750 levitated into climb in what we would estimate was under 200 feet. By the end of Eastmans 6000-foot runway, the airplane was at nearly 1000 feet and still climbing at 600 FPM. As you can see in the photos, the CH750 has a bunch of glass, so visibility is unrestricted in all directions, even forward. And thats good, because the climb deck angle is quite high.

The airplanes glareshield ducks sharply downward, terminating at nearly knee level for the pilots. One odd effect of this is that the rightseaters throttle control is squarely in front of the seat, not offset to the left or right. On further rumination, we realized thats the only place to put it, otherwise the rightseater would have to awkwardly reach across the cabin to get at the throttle.

Roll and pitch forces are pleasantly light, but not to the point of twitchiness. However, that cant be said of the rudder forces, which are quite stiff. Both of these airplanes are equipped with a steerable nosewheel-something you dont see in many LSAs-and the bungee mechanism that provides this appears to impart some stiffness to the circuitry. It takes a grunt to move the rudders and theres very little feedback.

Slow speed handling is superb and stalls are nothing but a docile parachute mode. We couldnt provoke a break with anything short of abusive control input. Because the airplane has full-span flaperons, it has good roll control throughout the speed range. In slow flight, habit dictates using the rudder for roll control, but the flaperons are also an option.

Speed? Well, not much. At 3000 feet, we noted 80 knots true at about 65 percent power at 6.5 GPH. With 22 gallons usable, that makes the CH750 a three-hour airplane, with a little reserve. The seats are comfortable enough, so you could stay in for longer if the spirit moved.

Landings are a showoffs delight. On a large runway, you can not only make the first turnoff, in a maximum effort arrival, you can touchdown inside the threshold and stop short enough to turn in where a departure is doing his runup. This will elicit some comment on the frequency, to be sure.

Eastmans shtick with the CH750 is twofold: max performance STOL for any owner who wants that performance and a strong tilt toward the UAV and law enforcement platform market. In our view, if they get traction with either, thats a good thing. Its always in any would-be owners interest to have more rather than fewer airplanes in the field. For more information, contact Eastman Aircraft at www.eastmanair.com or 478-374-2759.