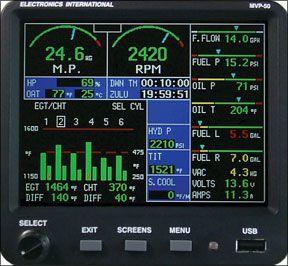 A likely thing to be rid is the mid-century electromechanical engine gauges that squat on the panel, but dont provide anything other than a single reading. Thats where new-age engine monitors like Electronic Internationals MVP-50 come in. Increasingly, these large-screen monitors do far more than just track engine trends, and the MVP-50 does more than any engine monitor weve seen to date.

We recently had a look at this device being installed in a Cessna 210, alongside Garmins G600 aftermarket EFIS. Given the MVP-50s size, that sounds like too much glass even for the 210s large panel, but with the traditional engine gauges disposed of, theres a net gain in efficient use of panel real estate.

The MVP-50 is one of a growing number of large-screen monitors-see the complete list in the chart on page 13-that are beginning to displace the classic dancing orange bar instruments that GEM and JP Instruments built businesses around. Inevitably, as color displays improved and became cheaper, engine monitors became larger and integrated more functions, culminating in the MVP-50.

At roughly 5 inches square, the MVP-50 is slightly narrower than the standard radio stack width and a bit taller than a Garmin GNS530. That means in most cockpits, its going to live in the far right panel, not in the center or on the pilots side. Realizing that, EI has a remote annunicator/alarm option thats small enough to fit on the pilots side panel and will alert of any out-of-range conditions.

And that could be a lot of stuff because the MVP-50 is capable of tracking just about every trend and system in the aircraft, from basic engine parameters, to fuel quantity and flow and things like flap and gear position. It also has GPS interface functionality.

The MVP-50 is a two-box system, with the main guts of the instrument contained in a 5-inch square display unit. It generally uses existing sensors-CHT and EGT

probes, pressure sensors, fuel senders and so forth-so theres not a huge amount of rewiring to do on the firewall and systems side. But all of that sensor data has to be passed through what EI calls a Engine Digital Converter that converts the analog data into a digital signal the MVP can process.

The MVP-50 is shipped with the correct transducer set for the aircraft in which it will be installed, and EIs Dave Campbell told us every conceivable temperature and pressure value has a sensor channel and there are additional channels for expansion.

Because the instrument accepts and displays so much data, EI customizes each unit on a per-customer basis before it goes out the door. It has a worksheet that the buyer fills out before the order is shipped, assuring that the airplanes required limitations appear on the instrumentation.

But the customization doesnt end there. The MVP-50 has a total of 13 discrete data screens and some of the fields in these screens can be reset on the fly. Theres even a fully detailed help screen, although we didnt need it because the MVP-50 passes the ultimate acid test for operating logic: We ran through it from start to finish, without cracking the operating manual.

A single key toggles through the screens and the way it does that can also be customized by changing the order in which the screens come up. The MVP-50 offers the option of showing engine parameters digitally via tape-type sliders or graphically with an engine icon and cylinder and EGT values displayed right next to the cylinder. As youre toggling through the choices, the MVP-50 keeps the required engine instrumentation in the right third of the screen at all times, thus satisfying the FAAs stricture on legal replacement of the OEM instruments.

What we found most appealing about the MVP-50 is that the auxiliary screens-although a little denser with type than we would like-were logical and easy to use. And there are a lot of them, including a fuel calculation and range page, CO2 detection through a CO Guardian add-on option, weight and balance, a help sheet with engine diagnostics based on whats being displayed and even some AIM guidance with reminders on VASI light indications and VFR minimums.

Thats way more than engine monitors have traditionally done and so is accurate fuel gauging, which the MVP-50 also does. It uses the OEM tank sensors and during installation, the display can be accurately recalibrated by filling the tanks a gallon at a time. Tedious, but worth it for the accuracy.

What surprised us most about this product is how complementary it is of aftermarket glass panels, which lack the sophisticated engine monitoring that are now standard in Garmin and Avidyne setups. With something like a G600 installed, the MVP-50 more than holds its own in replacing OEM instruments and, interestingly, it makes it possible to bring a legacy airplane like a Cessna 210 or mid-1980s Saratoga to nearly state-of-the-art on a reasonable budget.

Given those benefits, we think the MVP-50 is an excellent choice for anyone who wants an engine monitor or device that can also keep track of systems status such as gear and flap position, trim and other nice-to-knows.