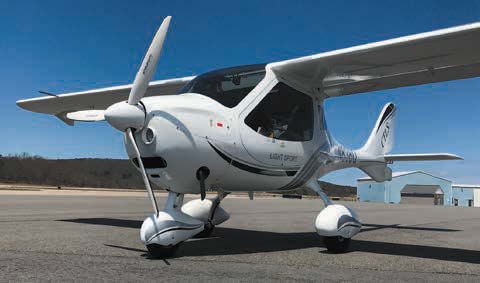 If you’re still hanging onto the notion that LSAs aren’t real airplanes then refocus and put your eyeballs on the 2018 CTLSi GT. Before even flying one, it was easy for me to affirm that it is indeed a credible, upscale, go-places LSA traveler with combined systems that make it one of the most modern piston singles on the market.

That’s a bold assertion and there’s no comparing it to something like a new Cirrus for speed and all-weather utility. Not close. But with a new three-screen EFIS system that’s highly integrated with the engine and airframe, plus a whole-airplane parachute, the only thing that might stop a qualified buyer from putting one in the hangar is the silly legalities of not being able to fly it in IMC.

Flight Design went into receivership in 2016 after getting in trouble with non-payment from Asian business deals. While the Ukrainian factory where Flight Design aircraft are made never shut down, last summer the company was bought by the German firm LiftAir, a subsidiary of the Lindig Group, which also owns the gyrocopter company Rotorvox.

Now called Flight Design general aviation GmbH, production is ramping back up and according to Tom Peghiny at U.S.-based Flight Design USA (the brand’s regional center for the entire North and South Americas), the factory plans to build roughly six airplanes per month. When I visited Flight Design USA’s facility in Woodstock, Connecticut, early this spring a spanking new 2018 CTLSi GT had just been issued an airworthiness certificate and was headed for Sun ‘n Fun.

And it joins a Flight Design fleet that is nothing to sneeze at. There are more than 1900 CT aircraft flying since 1997. The first was delivered to the U.S. in 2003, where there are now more than 400.

The airplane has an all-moving horizontal tail (a stabilator with a push/pull cable) and to improve control feel, the stabilizer has an anti-servo tab attached to the tail with a composite membrane. There’s electric pitch trim via a command switch on the center console, but I think it needs to be on the control stick. The aircraft has traditional nosewheel steering via push rods, while a spring-loaded centering device holds the pedals in a neutral position in flight.

The ailerons are activated via push rods that run from the control sticks through a tunnel to a mixer located in the baggage compartment. In the mixer, the aileron input is coupled with the flap setting, and when extended, the ailerons follow the flaps to a preset limit. The airplane has winglets, and the ailerons have return springs, which combined contribute to better harmonic control feel at low speeds. There’s also aileron and rudder trim.

The aircraft has electric flaps, from -6 degrees for fast cruise flight to 30 degrees when fully extended. The flap indication system is smart; the position indicator flashes when the flaps are moving to the set position and then the indicator shows the current flap setting. There’s also an internal load-limiting device that prevents flap extension above 80 knots.

Flight Design did a good job designing the wide gullwing doors for easy entry into the wide cabin with high-quality leather seating and stylish trim. Owners stepping down from high-end rides will be pleasantly surprised when sliding into the CTLSi GT for the first time. The cabin is nearly 50 inches wide—which is wider than a Bonanza and Skylane cabin, among others. There’s plenty of headroom.

You won’t be hauling bicycles in a CTLSi, but you can bring small stuff along. There are two 55-pound-capacity baggage compartments behind the two front seats, not accessible from the cabin but through hatches on the side of the aircraft. I stuffed in a large backpack and some camera gear and there was space left over. A good-sized duffle for overnight trips wouldn’t be a problem. There are also hinged storage compartments in the floor, just forward of each seat.

There’s a lot of glass on the airplane, adding to a spacious feeling and offering good outside visibility that betters other high-wing aircraft. Aside from large door windows and two rear windows that help with rearward vision, there are also skylights, which brighten the cabin even more.

The CTLSi is equipped standard with a BRS-6 1350 full-airplane parachute. The repack/recertification interval is six years and typically costs around $1600 including labor and freight. All exterior lighting is LED.

The big news for the 2018 model is Dynon’s SkyView HDX integrated avionics, which also has Dynon’s integrated two-axis autopilot with Level mode and a controlled 180-degree turn function intended to fly the airplane out of inadvertent IMC. It’s not the first time the SkyView and an autopilot were used in a Flight Design, but the GT is the first model to get three integrated HDX screens. To say they dominate the cabin is an understatement.

Equipped with dual independent ADAHRS, synthetic vision and wireless connectivity to tablets running ForeFlight, there are two high-definition 10-inch touch displays and another 7-inch display in the center of the panel that functions as an MFD and as an engine management system, or EMS. This is full integration, with all displays connected over the network and sharing the data for reversionary backup, plus two of the displays are backed up by 30-minute emergency batteries. For redundancy, there are two pitot tubes. There’s only one EMS module, however, so if it fails you’re on your own for monitoring the aircraft’s Rotax 912iS Sport engine.

The aircraft has Dynon’s SV-X83 comm radio, built-in VFR GPS and the SV-2S intercom, but there’s an option for IFR GPS navigators (including Avidyne’s IFD440) for those wanting to do instrument training or fly instrument approaches under VFR conditions. Flight Design has the 2020 ADS-B mandate covered with Dynon’s SV-261 Mode S ADS-B transponder, plus there’s full ADS-B traffic and weather capability through Dynon’s SV-472 dual-band ADS-B In receiver.

The aircraft I flew had an empty weight of 838 pounds and with two of us and 132 pounds (4.4 hours endurance) of fuel aboard the takeoff weight was 1310 pounds. The usable fuel is 34 usable gallons (Ethanol blended autogas is approved) and the fuel selector for left, right and both tanks is located on the rear panel just behind the pilot’s right shoulder. There’s a header tank in the baggage area that holds 1.32 gallons of reserve fuel.

The aircraft doesn’t have toe brakes so out of the chocks it’s one hand on the large brake handle (the airplane has MATCO brakes and wheels), which sits just to the right of the throttle lever. I found the airplane easy to taxi with little need for power adjustments.

Cabin ventilation is good, with sliding windows and small fresh air scoops on each door. There are warm air nozzles for cabin heat, generated in a shroud that guides fresh air from the intake at the middle of the lower cowling around the muffler. There’s a CO detector installed as standard.

The 100-HP, dual-channel ECU Rotax 912iS Sport is nearly a perfect match for the CTLSi GT, in my view. It’s mated to a ground-adjustable Neuform three-blade composite propeller. Full-power takeoff yielded roughly 5500 RPM and normal takeoffs are made with the flaps clean, and with 15 degrees on shorter runways.

The takeoff roll is short and the first time you fly a CTLSi you’ll need to establish the correct reference point out the windshield. With the tapered nose, it’s easy to take off and land with a sideslip as you look to the center of the windshield, but that’s not going to work. The correct sight picture is established by drawing a vertical line upward from the inboard end of the pilot’s left rudder pedal.

Rotation speed comes at around 46 knots and once rolling, you’ll want slight back pressure on the stick to unload the nosewheel. Out of a Cirrus that pretty much flies itself off the runway, on my first try I slightly over-rotated and the AoA let me know it. I had it perfectly dialed in the second try, with just enough back pressure to smoothly get the airplane flying and into the climb. And climb it does.

With flaps at 0 degrees and pitched for around 57 knots, I saw 1100 FPM—not bad for 100 horsepower. The maximum climb angle is 52 knots, which is uncomfortably steep for VFR climbouts.

Stall speed at gross weight is 42 knots with full flaps, with no eye-popping break-off. I made a bunch of turns during slow flight and the airplane just doesn’t have any bad habits. You don’t want to input any more than 30 degrees of bank at pattern speeds, which is around 55 knots, although small power inputs slow the sink rate.

In cruise flight with a negative 6-degree flap setting, I saw 114 knots when throttled back to 5.4 GPH. At maximum continuous power, expect 120 knots, burning 7 GPH.

It’s no secret that lightweight LSAs are a poor match for ham-fisted pilots and the Flight Design is no exception. A recipe for success starts by nailing the right speed—every time. The typical approach speed is 60 knots on base with 15 degrees of flaps deployed, slowing to around 55 knots on final approach. With flaps at 30 degrees, the speed decays to around 53 knots. I flew the airplane in light winds and with Tom Peghiny coaching from the right seat, I learned a thing about mass and gravity, and can see how pilots new to an LSA might crunch one during landing.

Going into the flare with limited engine thrust and a low mass means running out of energy pretty quickly. “You need to fly it down to the runway and then you need to fly down the runway a little and then land. Once you get used to that flare sequence, you can still put the airplane down in a short amount of space,” Peghiny summarized. After a couple tries, I wasn’t a pro, but competent.

It’s easy to see why Flight Design owners I’ve talked to gush over their airplanes and the 2018 CTLSi GT offers more than any previous CT model, particularly from a technology standpoint. It has a highly integrated EFIS/autopilot, a reliable and solid-performing liquid-cooled Rotax 912iS Sport, a whole-airplane parachute and a cabin with enough class to lessen the blow of a price tag that flirts with $180,000, fully optioned. For comparison, Bristell’s NG5 and Tecnam’s Astore LSA travelers typically sell for around the same price.

With a new parent company and an energetic distributor/support network that reports an uptick in sales, the future looks bright for Flight Design. I’m anxious to see what happens with the company’s four-seat C4 project, an airplane that was knee deep in the revised Part 23 certification process before Flight Design’s short hiatus.

For now, those being banished to or choosing the LSA world will find a lot to like in the CTSLi GT. As Peghiny put it, “It’s like driving a Miata after selling your Corvette.”