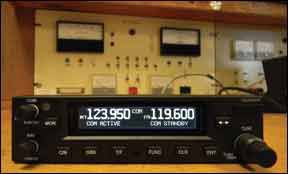 Over the years, the role of the standalone navcomm radio has changed from a primary system to backup, often playing second fiddle to all-in-one integrated mapcomm systems. But we’ve wondered if the traditional navcomm radio might make a comeback if it had more advanced features—perhaps a built-in database for searching frequencies and better yet, an interface that can connect with a panel-mounted GPS for sharing data.

Garmin has done just that—replacing their current line of SL-series navcomms with a completely redesigned line, to include the GNC255 navcomm and comm-only GTR225. These radios are engineered using technology which comes from high-end panel-mounted avionics in the Garmin line.

The new navcomms have plenty of smart features, can interface with portable and panel GPS units, and are compatible with a healthy variety of nav displays. We think the GNC/GTR products are the evolutionary radios the industry has been waiting for.

Family TIES
The localizer and glideslope equipped GNC255-series and comm-only GTR225 replace the SL30 and SL40 line of navcomm equipment, although they aren’t plug—or size-compatible. These slim-line radios were designed by UPS-AT and Garmin acquired the product line when they bought the company. While the SL-series was a decent seller, many buyers recognized that the units in the SL line weren’t a true Garmin design, especially when racked together with a GNS and current GTN navigator.

That’s not the case with the new GNC and GTR radios, which borrow sizeable amounts of styling and features from several products in the current Garmin line—including the GTX300-series transponder. Moreover, the digital nav and comm boards inside the new units come from the current GTN navigators. Even the control knobs and buttons will be familiar to those accustomed to pawing popular Garmin products like the G1000, for example.

SIZING IT UP
While not as compact as the Slim Line series they replace, the new navcomm units stand 1.65 inches high with an LCD display area that measures 3.46 inches wide and 0.84 inches high. That’s similar to the display on a GTX327 or GTX330 transponder, but these new units have much improved backlighting—which can be adjusted by the user or auto-dimmed with an on-board photocell. The display has a wide 45-degree viewing angle, which isn’t bad for LCD technology of that small size. The trade-off for a larger display is a larger chassis and bezel, so the new radios aren’t as space-efficient as the older SL-series.

The navcomms use traditional buttons and control knobs, and Garmin resisted the temptation to make these new units touchscreen. We found the basic controls simple to use right away because they’re designed exactly the way pilots would expect on a traditional navcomm. In fact, the volume controls, squelch control and navigation radio IDENT control layout and functionality is borrowed from the Garmin GNS430 and 530 navigators. Plus, frequency tuning is the same as it ever was— simply dial the frequency on the standby window on the right and transfer it to the active window on the left, using the familiar flip-flop transfer button. Compared to the older SL-series, the controls on these new navcomms are kicked up several notches—with a durable and solid feel that is similar to that of a GNS530 or G1000. We’ve heard from users over the years who felt the older SL series felt cheap. That crowd will be pleased with the new line, in our estimation.

CONNECTIVITY
The GNC/GTR may seem like traditional navcomm radios on the outside, but digging into the interface potential reveals the most advanced radios we’ve put on our bench. First, the digital nav and comm boards come from Garmin’s current GTN700 and 600 series navigators. Standard is a 10-watt comm transmitter, with an option for 16-watt transmitter, which better suits the needs for high-altitude and jet ops. There’s also 8.33 kHz spacing to accommodate the proposed European requirements and future airspace growth.

As most technicians would welcome, Garmin built a USB port on the upper right corner of the front bezel, which is used to update software and an internal database. No need to wire a remote USB port in the harness. To keep the unit cool, there’s a cooling fan integrated into the chassis to draw forced-air cooling through the unit, plus inlets along the right side of the GTR/GNC chassis that allow air to flow through the unit. We powered the unit for long periods of time and the unit remained efficiently cool, while the cooling fan kicked on when appropriate.

The GNC255, which has built-in glideslope, can interface with a wide variety of navigational displays, including the Garmin GI106A CDI, Garmin G500/600 PFD and the G3X, plus it has compatibility with some Bendix/King CDI units—including the popular KI209, when wired for analog composite output. This Bendix/King indicator compatibility will make existing KX155 and older KX170 radio upgrades cheaper. The GNC is also compatible with the Bendix/King KN62 and 64 series for displaying on-screen DME data, while pressing the OBS key displays the current OBS setting and a graphic CDI. While there’s no mention of compatibility with Aspen displays, the composite output format might work. There’s also an ARINC 429 databus output.

Speaking of Aspen, we think these navcomms might be more versatile if they could interface with Aspen’s Connected Panel wireless gateway.

SMART TALKER
The interface doesn’t stop at the navigation receiver. It’s the comm radio interfacing that makes the GNC/GTR units more advanced than any radio available for retrofit. It starts with an internal frequency database of airports and VOR stations. This data is provided for download on the Garmin web site and loaded to the unit with a thumb drive. Pressing the Function key enables the menu structure where you can select the database feature to look up the airport name or station ID, much like you would in a GPS. There’s also a reverse lookup feature, which fetches the facility name associated with the frequency that the user manually tunes, using the database and a valid GPS position input. Further, when the radio has received data from an external GPS receiver or DME, it displays distance, speed and time to station.

Pilots seem to like frequency storage and the GNC/GTR radios deliver—15 frequencies can be programmed, while the radio automatically stores the 20 most recently used frequencies.

The radios have liberal amounts of databus interface, which opens the door for playing with panel and portable GPS units. Garmin told us the unit accepts the industry-standard Aviation In RS232 serial label, which makes it a player with most panel GPS systems, while the NMEA interface makes it compatible with later-model portable GPS units, including the aera796/795 and GPS696/695, for pushing frequencies.

Other features include Morse code station identifier decoding for VOR and localizer stations, an integral two-place intercom, on-screen timers and auxilliary input for music, making the units worthy for standing alone in the stack.

FILLING THE VOID
At $4495 for the GNC255A navcomm ($5495 for the 16-watt GNC255B) and $1995 for the entry-level, comm-only, 25 kHz GTR225, we think these radios fill a void in a market which still has a need for standalone navcomm equipment. That’s because traditional navcomms are popular for backing up GPS mapcomms. The discontinued GNC250 and GNC300 line of GPS/comm radios filled that void and were brisk sellers. We expect the new GNC and GTR to take over that role.

There are plenty of owners that don’t have the budget for an integrated navigator like the entry-level Garmin GTN650 or even a used GNS430. Further, we think the GNC255 could be an excellent fit for lesser aircraft, including new and legacy LSAs. The ability to connect with a portable GPS enhances the interface and sweetens the deal.

Then there’s a calling navcomm replacement market. As the iconic Bendix/King KX155 is aging, many owners are looking for a fresh upgrade that won’t result in major and expensive teardown. Although the reliable KX155-series is still offered, we expected Bendix/King to tackle that market—perhaps with a modern, drop-in replacement for the KX155. They could very well have such a radio on their engineering bench. But for now, Garmin targets the navcomm market, with modern radios that won’t bust the budget.