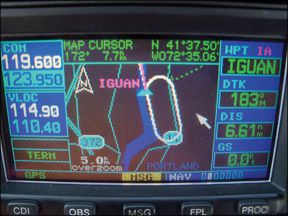 Nearly every proposal for a new autopilot installations-which these days means S-TEC upgrades-should include a GPSS option. And optional is the key word because unless you buy a flagship S-TEC 55X autopilot, GPSS wont be included with the base system. For most customers looking to upgrade GPS and autopilot equipment, GPSS hardware is grossly misunderstood.

Although hardly a major system, GPSS is considered an accessory that plays a huge part in total autopilot automation. Impressively, it emulates the tight performance found with big-airplane inertial navigational systems.

Upgrading to GPSS is pretty easy, since there are several aftermarket GPSS systems to choose from. They can be interfaced into a new autopilot installation or tacked on to an existing 30-year-old autopilot. Theyll work in a limited way with older GPS navigators as well as newer ones.

Lets do a brief rundown with a simple explanation of GPSS along with a look at the current market offerings. To cut to the chase, if you buy a new Aspen PFD or Garmin G500, GPSS is included as a bonus.

Its easy to see why GPSS systems cause so much confusion. To understand the theory of operation, you need to understand the relationship between an analog and a digital interface. Most general aviation autopilots (with the exception of Garmins integrated GFC700 thats part of the G1000 suite) are analog-based systems.

This 1980s and earlier analog circuitry knows nothing about high-speed databuses or RS232 serial waypoint data that stream from most modern GPS units. Instead, when autopilots track a course, they follow the analog left/right needle action from a mechanical CDI or HSI. Analog autopilots chase the needle just like a hand-flying pilot would. But this game of needle-scalloping cat and mouse can be decisively

won with the more precise tracking of digital GPS steering, which takes the CDI out of the picture and digitally connects the GPS with the autopilot computer over a databus.

Instead of tracking a course, a GPSS anticipates course changes along the way by commanding a coordinated new course heading without overshooting or undershooting. Since the GPS navigator calculates exact turn initiation points from waypoint to waypoint based on GPS groundspeed, leg transitions in a flight plan are seamless. Its pretty smart stuff.

Because GPSS systems are really signal converters, the digital signal received from the GPS gets converted to a language that the autopilot understands-and thats a heading error signal. The resulting magic to the interface is added precision. So much precision, in fact, that the system will tightly fly procedure turn course reversals, holding patterns and even nail steep intercept angles both enroute and on a GPS approach. The pilots job is to monitor and stay ahead of the interface.

The mechanical interface consists simply of a remote control box and panel-mounted mode switch. You wont need much panel space to house the mode switch-its reasonably small. The remote control box is about the size of an altitude encoder and can be mounted anywhere theres room under the panel.

Experienced shops should be able to complete an average GPSS retrofit in about two days. The biggest effort is accessing the GPS in the main stack to connect to the databus.

The logical choice when installing a new S-TEC autopilot is to include the S-TEC ST-901 GPSS steering system. Its a remote box with a square, panel-mounted annunciator control switch. Again, the flagship System 55X comes with self-contained, integrated GPSS. But other S-TEC systems dont.

Theres nothing wrong with adding GPSS steering later, except the autopilot computer might need to be modified to accommodate the GPSS, which adds to the bottom line. S-TECs ST-901 costs $2184, plus installation.

DAC Internationals GDC31 is similar in design to the S-TEC system. The GDC31 shines in that its compatible with a broad range of autopilot models, including the old but durable Bendix/King KFC200, plus models from Century and Cessna. It will also interface with an S-TEC autopilot. Its important to understand that a GPSS

wont solve autopilot problems inherent with some of these old systems, so if you have faulty servos, computers and lazy autopilot gyros, youll still need to get these fixed. The DAC GDC31 has a liberal AML/STC and the system is built with quality and ease of installation in mind. The GDC31 has a price tag of $1989.

The Cadillac of GPSS is the $2295 Icarus Instruments Steering Assist System (SAM). While performing the same steering functions as the S-TEC and DAC, the Icarus system includes some nifty functions, including altitude alerter, landing gear warning and other interactive warnings. For instance, when a destination altitude is set, a check gear alert will be provided at the pre-established height above that altitude. Theres other annunciation, too, including voltage, oil pressure, vacuum pressure, engine monitors, stall warning and audible voice prompting of waypoint passage. These options also mean extra installation effort, so a close eye on your shops quote is in order when specing this system. The SAM uses a larger control head than the other brands to accommodate these functions, so more panel space is required. The Icarus steering system works with a variety of AC- and DC-based

Flying an entire flight plan hands-free without manual heading changes or spinning the course pointer is what GPSS is all about. But without WAAS GPS in the mix, the interface could be limited for approach operations. Sure, you can still sit back with crossed arms while the autopilot flies doglegs in the flight plan and intercepts a GPS approach as if its on rails, but it cant fly a procedure turn or holding pattern.

While older legacy navigators output composite roll commands, they dont output guidance in the hold segment of the approach procedure. Garmin WAAS navigators (including the discontinued GNS480/CNX80) incorporate this functionality.

A WAAS upgrade for the legacy GNS430 and 530 units could run a few grand, on top of the few grand it costs for a GPSS steering installation. These numbers are often tough to swallow for many owners already stretched by expensive autopilot upgrades. If an Aspen or G500 is in your future, we suggest holding off on GPSS upgrades. Still, GPSS automation is so impressive and capable addition, its worth considering for auto-pilot-coupled, cross-country missions.