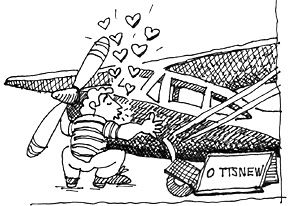 Since I took delivery on a factory-fresh airplane early last summer, Ive heard no end of wisecracks.

Theres the nautical allusion: Boy, you must have come loose from your moorings.

The wholistic observation: New airplanes are natures way of saying you have too much money.

And finally, the accountants caveat: When the smell wears off youll be stuck with a really expensive used airplane.

Ill admit theres more than a germ of truth to the notion that new airplanes are only for dot-com millionaires, doctors/lawyers and lottery winners.

They are expensive and something 10 or 15 years old generally offers comparable capability with far lower sticker shock, not to mention the likelihood that a used airplane will actually appreciate in value.

But on behalf of everyone whos ever had to sit down with an entire new airplanes worth of warranty cards, Im here to say were not nuts. At least not all of us. And herein lies the story of one mans path to the smell of new leather-well, okay, plastic-and hot engine paint.

Big Airplane? No
In my case, the first step down the slippery slope toward 0 TTSNEW was a decision to change airplanes. My first airplane was a 1978 Mooney 201 that served my family well during five years of sole ownership. In it we survived a notorious exploding mustard bottle at 7000 feet and a noxious diaper explosion over Tallahassee.

But when kid number 3 arrived, we needed more room and payload so we traded the Mooney for a 1977 Piper Lance.

To ease the sting, we bought it with two partners in an arrangement that, over three years, led to only two real scheduling conflicts.

The Lance was more of everything than the Mooney. More seats. More fuel burn. More maintenance. More useful load. With full tanks, we would still be 100 pounds under gross. Even the eight-hour flight to Oshkosh single pilot was comfortable enough.

But as is often the case with owners of six-place airplanes, most of my flying happened solo or with one other person aboard. I hauled empty seats all over the country.

What a Bore
And, frankly, it was a snooze to fly. The stability that made the Lance great on instruments also meant it was ponderous and heavy for any recreational flight. Capable as it was, the Lance was putting my feet to sleep.

Time for a mid-life sporty taildragger. And heres where the new-versus-old analysis heats up. I had a couple of dozen hours in a rental Citabria when I concluded that maybe a Super Decathlon might cure the ennui that had crept into my flying after 14 years of straight-and-level.

Actually, I considered a Pitts and an Extra before I finally came down to Earth. Thats right, my wife said, If you buy a Pitts, youd better be ready to sleep in it. Nothing focuses the airplane buyers mind like having no choice.

Like many pilots, Id fallen into the bigger/ faster mindset and, somehow, dialing back to a Super Decathlon didnt sit well. So as an offering to the gods of aviation studliness, I looked for one that was IFR equipped, reasoning that I could use it as a good-weather IFR cross-country airplane for limited business travel. Go ahead and snicker. This makes perfect sense on paper. Sort of.

As my shopping commenced, an AD surfaced affecting the Citabria/Decathlon fleet built with wood wing spars. That meant pretty much all of them were subjected to an intrusive periodic inspection, if you could even find a mechanic who would touch a wood spar.

This pushed me toward later model airplanes, because American Champion has been putting aluminum spars in the airplanes since it restarted production in 1992. I soon realized that IFR-certified Super Decathlon built since 1992 described about two airplanes in the entire continental U.S.

Part of the problem was that even if you equipped the Super D with gyros and radios, the required heated pitot was only economically feasible if ordered when the airplane was built. You can begin to see where this is going.

Seek, Find
Yet surprisingly enough, I found an IFR Super Decathlon for sale right about the time I put the Lance on the market. I took it as a sign that fate was working in my favor. I called for specs and discovered that, not only was the airplane equipped exactly as I wanted it, it was a low-time 1992 model adorned in my preferred color scheme. Before I could whip out my checkbook and fire off a deposit to secure it, however, I needed to cash out of the airplane I already had.

I was handed the check from the Lance sale on a Monday and I immediately called the broker selling the IFR Super D, only to discover he had taken a deposit on it the previous day.

But the evil seed had been planted. In a frenzy, I called every American Champion dealer in the country looking for another. I checked the airplane classified web sites four times a day.

Suddenly, the quest took on the kind of urgency usually felt when taxiing in after drinking six cups of coffee en route.

Then I had an epiphany. An aircraft salesman with an extensive background in aerobatics asked why I wanted an IFR Decathlon. Over the next hour and a half, he convinced me Id be just as happy with a VFR Citabria.

Actually, thats not quite true. He asked me questions that led me to convince myself Id be satisfied with something not so drenched in testosterone and that it would also be cheaper was a fringe benefit.

So a Citabria it was.

Again a later model was a clear choice, not only because of the wood-spar AD but also because some models of the metal spar airplanes have a 100-pound useful load boost, which makes the airplane a full-seats-and-tanks flier.

The Bellanca Citabrias can carry only limited fuel with two aboard. For example, the 1977 7GCAA I had rented had a useful load of only 467 pounds. Im close to FAA standard size, but put two of me aboard and you could legally carry only 21 gallons, before parachutes.

A couple of 25-pound chutes brought the legal fuel limit to only slightly more than an hours worth. Half of that would be used getting to and from the practice area. Forget about having a reserve.

New Versus Old
There are other differences between the older and newer production that made the newer ones preferable, but the gross weight boost was the clincher for me.

Then I began to think about how Citabrias are flown. Some are primary trainers, some are used for banner towing, some for tailwheel endorsements. I could probably screen those out.

But many are used for knockabout introductions to aerobatics. That means theyre subjected to student mistakes such as overspeed and excessive Gs.

Plus, who knows how well the previous owners cleaned up after students/passengers who, uh, donated more than the airsick bag could hold? I concluded there are some things you just dont want to think about in a used aerobatic airplane.

The IFR Super Decathlon Id originally given my heart to-a nine-year-old airplane-was priced in the low $90s, so psychologically I was in the same place, even though the product was different.

Mentally I balanced the reduced capability with the later vintage, but admittedly I didnt try too hard to quantify how accurately that balance was made.

Then a terrible/wonderful thing happened. I went to Sun N Fun and there at the American Champion display was a gorgeous Citabria. The tach boasted 14 hours-the flight from the factory to Lakeland.

I hung around. I talked to the salesmen. I hung around some more; shot some video. I came back the next day with my son and we hung around some more. Like the day when you decide to marry someone, the airplane and its strengths and weaknesses fell into a supernatural focus that spotlighted the good points with startling clarity while diffusing the shortcomings. In other words, I had indeed come adrift from my moorings.

Caving In
At home that evening, I regaled my wife with my airtight analysis of why it made sense to buy a new airplane. She feigned interest. I have a nagging suspicion Ill be paying for this come Christmas this year. And next.

I paid virtually the same price as a leftover 2000 model would have cost. Thats money in the bank. (If you dont understand that logic, dont even think about buying an airplane.)

There are some things about airplanes that defy rationalization. Check that. Nearly everything about airplanes defies rationalization. What pilot has not invented reasons to take a trip simply because the beast in the hangar was calling? Who has not pretended that singles and light twins are anything other than cramped, noisy places to get hot or cold at frightening expense?

While an accountants view of a new airplane purchase may find that the decision comes up wanting, my justification for the premium price was simple. As new airplanes go, the purchase price was reasonable. I came away from my airplane selection process convinced that American Champion offers perhaps the best value in factory-new light airplanes-provided your mission includes yourself and perhaps one other. For the price of one new Bonanza you could buy six new Citabrias. Seats for 12, thank you.

But psychologically, I reasoned that the price of new was pretty close to the price of used and that the new airplane didnt cost that much, relatively speaking. I imagined new airplanes arent likely to get any cheaper in the near future and Im sure Ill be right about that.

Because its new, I wipe away the bugs after every flight. My reward is doors and windows that fit snugly, holding in the new-airplane smell of uncured plastic. The engine fires on the second blade and theres the security (perhaps illusory) of a factory warranty.

The dealer who sold it to me, an International Aerobatics Club competition instructor, threw in some aerobatic training and I got new parachutes at cost. Chump change, maybe, on the scale of new airplane buying but it helps salve the sting.

Last, I have to admit to a certain rush when the driver of a fuel truck came screaming across the ramp not to sell me fuel but to take a long, close look at one handsome-and brand-new-airplane.

Now if I can just get someone to fill out all these warranty cards for me.

Ken Ibold is editor of Aviation Safety magazine. He sleeps in a hangar near Orlando, Florida. 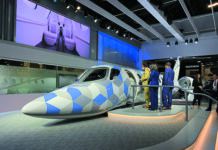